Former AFL coach Rodney Eade has backed calls for the league to introduce a concussion sub, with the 377-game coaching veteran saying he would go even further and allow a substitute to replace any player ruled out midway through a game due to injury.

Eade said if a substitute replaced a player with an injury other than concussion during a match then the replaced player would be automatically unavailable for the team's following game. 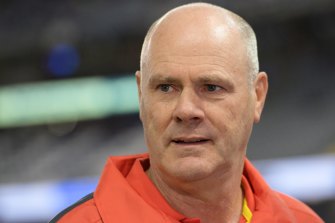 Rodney Eade has backed calls for a concussion sub.Credit:AAP

Under Eade's radical plan to protect player welfare the onus would be on the coaching staff to decide whether they wanted to bring an available player on to replace the injured player knowing that they would not have that player the following week. Eade said that would reduce the chances of the sub being used for tactical purposes.

"To have a concussion is sub is definite," Eade said.

However, he said being allowed to replace players who were injured would put the AFL ahead of the curve in protecting players.

"Society has changed their view," Eade said. "I know it is a game of attrition but we must look after the welfare of the players."

Eade was coaching the Bulldogs when a substitute was introduced in 2011 and was in charge of the Gold Coast during his final year in 2015.

He said giving the club the option to replace injured players would see the sub used more often, diluting the argument that concussion subs may miss playing a game on the weekend.

Eade acknowledged that further work would be needed on his idea to determine how such a rule would apply on grand final day, while the potential cost of having an extra player on the bench would need to be negotiated.

Former premiership Bulldog Liam Picken, who Eade coached in 62 of his games, put the idea of a concussion substitute back on the agenda this week after AFL legend Graham 'Polly' Farmer became the first VFL player to be found with CTE.

Picken, who retired last year due to lingering issues with concussion, said the AFL should follow cricket's lead in allowing for substitutes to cover for concussed players, with FIFA also considering having a concussion sub in soccer.

In Saturday's AFLW game in Bendigo Richmond lost key player Katie Brennan to concussion for the final quarter after she copped a knock from Geelong opponent Jordan Ivey just before three-quarter time. The Tigers were unable to take the momentum they had into the final quarter with Brennan on the bench unable to continue.

Under new protocols introduced this season, which means players need to be free of symptoms five days out from a game, Richards would have been unlikely to be available for selection this week if the incident had occurred in the premiership season.

If a concussion sub was introduced then under that scenario the Bulldogs would have at least been able to replace Richards during the match in which he was concussed.

Richards' teammate Sam Lloyd said he was comfortable with the current approach the AFL was taking in relation to concussions.