Snap Shot is a weekly column taking a look at the lighter side of football.

It still makes hall of fame coach Kevin Sheedy chuckle in the way only he can, when he recalls that Alex Carey’s professional sporting career actually began at the Rooty Hill RSL.

That was when Carey – who has become the 26th captain of Australia’s ODI team with Aaron Finch unavailable – was an early arrival in Greater Western Sydney, captaining the Giants in the TAC Cup as they prepared to enter the AFL.

Sheedy had to break the bad news to Carey that he had not won a spot on the Giants’ inaugural list, a decision that paved the way for Carey to concentrate on cricket as he went from representing South Australia and then Australia as a wicketkeeper-batsman.

“He’s strong on the leg side by the looks,” Sheedy joked as he shared a photo he’d taken of the young group, including Carey, as they started their Giant journey in inauspicious surroundings. 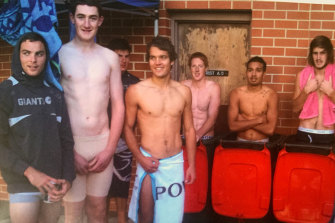 Alex Carey (third from left) in an earlier time. There are some other familiar faces in the shot.Credit:Kevin Sheedy

“You are very proud of these young guys and my advice [to Alex] was to go with cricket because we had a truckload of midfielders,” Sheedy said.

“It was not easy but everyone at the Giants has been so proud at how he has performed in his cricket career. It’s been unbelievable.”

Carey, of course, has a towel around him, but in the bins that doubled as ice baths are Bulldogs forward Josh Bruce, who is equal fourth on the goalkicking table, and Essendon’s Andrew Phillips, who has played 52 games at three clubs. Also recognisable is Fremantle’s running defender Nathan Wilson, to the left.

Carey is not the only talented cricketer Sheedy, a handy leg-spinner himself in district cricket, either coached or drafted in his coaching career.

Geoff Parker played three games under Sheedy in 1987 and 1989 in the middle of a first class cricket career with Victoria and South Australia. The Bombers also used pick 19 in 1987 to draft Jamie Cox, but could not convince him his future lay more in football than cricket.

Cox, who was unluckly not to play for Australia, was in charge of South Australian cricket when Carey shared with him how difficult he was finding the decision between taking a rookie cricket contract or heading to the Giants.

“Given my own experience, [my advice] was pretty straightforward. I said ‘do what you what you want to do because you have got two pretty good opportunities here,’” Cox recalled.

“The Alex Keath pathway [the Bulldogs defender who played first class cricket before returning to football via Adelaide] felt less familiar. It felt like you had to try footy first and come back to cricket if necessary.”

Cox, who has just been appointed to a plum role as assistant secretary (cricket and operations) that he will begin at Lord’s in September, was rapt for Carey.

Speaking of the Giants, Jesse Hogan must be wondering about the old adage of playing for the jumper given he has won four different guernseys in each of his four matches with the Giants since he joined the club at the start of the season.

At his third club after stints at Melbourne and Fremantle, it’s not going to deter Hogan too much, with the 26-year-old impressing despite injury in his first season at Greater Western Sydney.

Joining Burgoyne and KB at the hip

Going into last week’s match against Melbourne it was unlikely that Hawthorn champion Shaun Burgoyne would match Kevin Bartlett’s win-loss record when he draws level with the Tigers’ legend against Adelaide this round.

Burgoyne needed two draws to equal Bartlett’s record of 260 wins, four draws and 139 losses in his 403-game career as he entered the match against the Demons with 260-2-139. 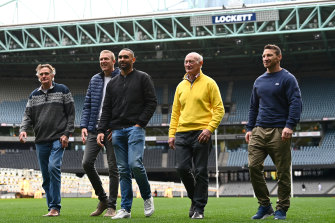 Well, as we all know now Burgoyne played in his third draw on Saturday night when Luke Breust – the teammate who has shared more games with Burgoyne than anyone else with 215 matches together – tied the scores in the final minute of Saturday night’s match at the MCG.

Just one more draw and Burgoyne’s record will be identical to Bartlett’s (though KB played in five premierships with the Tigers and Burgoyne played in four with Hawthorn and Port Adelaide).

Half as far to travel as this time last season

With 45 matches plus finals left in the season, it’s worth remembering that on July 20 last season the AFL still had 90 matches plus finals to tick off. It took until October 24 to get there but it is a reminder that although half the industry is exhausted they have half as much to do as they did at this same stage in 2020.