The 10-month-old son of former South Africa international Jannie du Plessis has drowned in an accident while celebrating the 39th birthday of the ex-Springboks prop on Tuesday.

The incident happened at Du Plessis’ home in the mining town of Krugersdorp near Johannesburg and has been confirmed by local police and Du Plessis’ provincial side, the Lions. 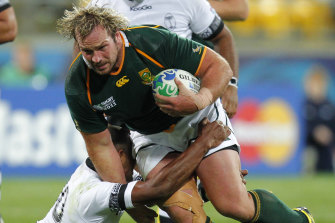 “I can confirm that this tragedy took place. We are all devastated,” Lions chief executive Rudolf Straeuli told South African news site Sport24.

Du Plessis won 70 caps for the Boks and was part of the squad that lifted the Rugby World Cup in 2007 alongside his brother, hooker Bismarck du Plessis. Jannie played his last Test in 2015.

Speaking ahead of Saturday’s Test against England at Twickenham, South Africa No.8 Duane Vermeulen said their former teammate and his family were in the thoughts of the players.

“They will be on our minds and all our condolences to Jannie and his family back home,” he told reporters on Wednesday. “It is a difficult time for them, but we will stand behind them and support them.”

Du Plessis, a qualified doctor, and his wife Ronel have two other children, daughters Rosalie and Hele.