Geelong defender Tom Stewart has hung on to claim his first best and fairest ahead of fellow defender Jack Henry after missing the Cats’ final five games of the 2021 season.

The 28-year-old has earned three All-Australian jumpers, but this is the first Carji Greeves Medal Stewart has won in his five seasons with the Cats. 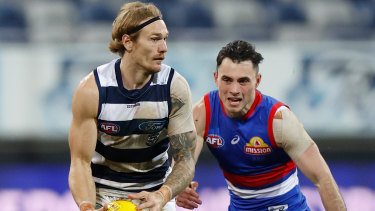 Stewart missed the final two home and away games and three finals due to a Lisfranc injury suffered at training, which required surgery. His absence was critical with Geelong losing three of their last five matches.

Stewart did not make his debut until shortly after his 24th birthday in 2017, but he has been a revelation and is one of the most admired defenders in the game, with his intercept marking and run vital to the Cats’ ability to rebound from defence in attacking fashion. 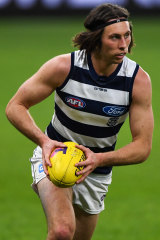 Jack Henry had a breakthrough year in defence for Geelong.Credit:AFL Photos

After Stewart’s match against the Western Bulldogs in round 13, which earned him two Brownlow votes, Cats coach Chris Scott said it was one of the best games he had seen a half-back flanker play, while teammate Zach Tuohy said Stewart was the best defender in the game.

He won the award from emerging defender Henry, who was brilliant in the Cats’ first two finals games after a consistent season. Henry was not picked for round one but rebounded from that disappointment to become the 23-year-old Geelong can build their defence around in the future.

Veteran key forward Tom Hawkins finished third after another fine season where he backed up his Coleman Medal win in 2020 by finishing runner-up in 2021. He was Geelong’s leading goalkicker for the 10th successive season.

AFL trades 2021: Stay across the moves, news and what it all means as our Real Footy newsletter goes daily for trade period. Sign up to get it here.