With everything else going on, there was always potential for the third State of Origin match to get a little skewy. It’s a rugby league truth universally acknowledged that when there is nothing at stake – unless you weigh threats to salvage pride or show ruthlessness – some of the most consequential events take place.

The third match, won 20-18 by Queensland, was the best of the 2021 series, an old-fashioned Origin classic that ended with a brawl. Both teams, like schoolies sent north when their Byron Bay trip has fallen through, made the very best of the cards they had been dealt. In vintage Origin fashion, Queensland kept scoring against the run of play and NSW kept blowing what seemed inevitable chances to win. After NSW’s sometimes exhibitionistic displays of superiority in the first two matches, this was blood-and-guts Origin.

The first half provided the best contest of the series so far, and the second half was even better.

On paper, the combination of Queensland regaining their first-choice fullback Kalyn Ponga and NSW losing their first-choice halves to injury brought the teams closer together. Queensland’s main attacking weapon, Cameron Munster, regained his spark and their prop forwards Josh Papalii and Christian Welch asserted themselves with the swift certainty of an Annastacia Palaszczuk border closure.

Munster, who had been as threatening as his namesake Herman in the first two matches, lost the facial hair and got back his energy. A sprint from dummy-half set up the first Queensland try, for 19-year-old debutant Hamiso Tabuai-Fidow, and Munster’s high kick nearly yielded a second.

The impressive factor in the NSW side in that first half was their goal-line defence. Virtually untested in Townsville and Brisbane, the Blues’ refusal to let Queensland cross the line showed a resolve to match the vaunted attack. Mitchell Moses, caught with the ball and generally off the pace in attack, tackled like a demon and stood firm when Queensland sent their battering rams at him. Cameron Murray’s grass-cutters left the Maroons with no legs to run with.

For a while, this was New South Wales from the lean years – plenty of brawn and heart when defending but precious little in the way of organisation with the ball in hand. Moses and Jack Wighton kicked too deep, and scoring tries was left to one-out flashes of inspiration such as Latrell Mitchell’s opener. 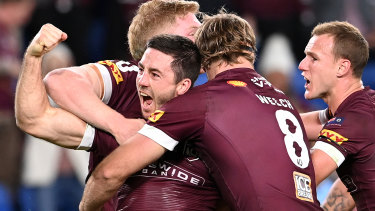 Ben Hunt celebrates one of his two tries on Wednesday night.Credit:Getty

But after half-time, the difference in class loomed. Wighton broke through the stretched Queensland right side, and the hinges of the floodgates began to squeak. The NSW bench players brought qualities, and quantities, more than their counterparts.

And yet Queensland did what Queensland do, which was to be greater than the sum of their parts. Ben Hunt, not even worth an invitation to a party at his club St George-Illawarra, produced the kind of game that Dragons fans have paid for but rarely see. He jarred the ball out of Mitchell’s grasp with a ferocious tackle and followed up with a dummy-half dart that put Queensland back in front. Minutes later, his left-foot step completed a wild sequence of running rugby league to extend the lead.

With referee Gerard Sutton opening the game up with lashings of the six-again rule, the game provided something of an ideal for the new dispensation. It was both fast and tight, a Peter V’landys dream come true. Credit to the chairman, who styles himself as an entertainment industry leader. In straitened times, this was entertainment aplenty.

NSW kept attacking, and when a Moses grubber put Apisai Koroisau over the line, 10 minutes seemed more than enough for them to complete the blue rinse of their desire. Despite continually making breaks, however, they lacked the finishing touch which had come so easily in the first two matches.

As a test event for the 2032 Olympics, this Origin series has been a logistical win for Queensland, cementing its self-image as centre of the sporting universe. They should show this game to the International Olympic Committee next week and who cares if no-one else can make head or tail of it. Rugby league can be a world unto itself, and this world is now fully housed north of the Tweed. If they can manage that successfully, Queensland deserve the Olympics in perpetuity.

The two captains and man-of-the-series Tom Trbojevic all took the stage after the match and put the Queensland government at the top of their thank-you list. Rugby league owes Queensland. Right now, rugby league needs Queensland. Queensland’s team played game three as if they deserved a reward and, this being their Origin, they got it.