Melbourne have been crowned minor premiers – and in even better news for the club, Ryan Papenhuyzen is back to his blistering best.

The Storm fullback produced his best game since returning from a sickening concussion suffered during Magic Round.

He scored three tries and grew as a threat the longer the game went against Cronulla during the 28-16 win.

The result means the Sharks’ finals hopes now rest with the Gold Coast Titans on Sunday. The Titans must win by 12 points against the New Zealand Warriors to pinch the last September slot.

But those already in the finals race would have dreaded watching Papenhuyzen in full flight.

The speedster was criticised for being almost too cautious and lacking confidence in his half-dozen games back from his head knock.

There was even debate about whether Papenhuyzen would retain the No.1 jersey and Melbourne start with Nicho Hynes at fullback for the finals. 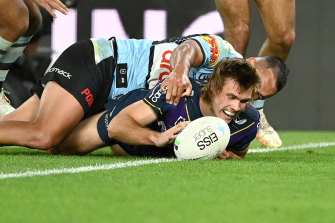 Ryan Papenhuyzen crosses for one of his three tries against Cronulla on Friday night.Credit:NRL Photos

But Papenhuyzen ended that debate with an outstanding performance that included 18 runs for 204m and 14 tackle busts.

“It was going to take time to build confidence, but tonight was the game I needed and I was lucky it was the game before the finals,” Papenhuyzen said.

“When we hold the footy I can play good footy, and that’s the key. In the second half we completed a lot better and I was able to do my thing off the back of that.”

Storm coach Craig Bellamy said: “I thought he took some real steps forward against the Titans [a fortnight ago], then he took a few steps back last week, but he was on again tonight. He will take a lot of confidence out of it.

“It’s good to have Paps back playing like that. He got a couple of tackles that were real solid tackles, but he got up straight away and it didn’t seem to worry him at all.”

The Storm rested Cameron Munster, Christian Welch and Felise Kaufusi, while Jesse Bromwich was suspended. Bellamy said Munster was battling a knee complaint but shopuld be fine, while Josh Addo-Carr (hamstring) was “touch and go”.

There will be concerns over towering prop Nelson Asofa-Solomona, who was placed on report late in the game.

The Storm are the team to beat again as they chase their second straight title after clinching a sixth JJ Giltinan Shield in 11 seasons.

Storm officials were forced to wait around at Cbus Stadium and watch the Penrith and Parramatta clash before being presented the gong just after 10pm.

There would have been only a few spirited souls who hung around to watch the presentation. There will be more than 50,000 fans expecting to watch the Storm take the stage again in about a month’s time holding aloft some even more important silverware.

Papenhuyzen was excellent, as was Cronulla-bound Nicho Hynes, who had a rare start at five-eighth.

Hynes thought he had thrown an inside ball for Papenhuyzen’s first try, only for Chris Lewis to be penalised for obstructing Briton Nikora in the lead-up.

But Papenhuyzen crashed over for his first just before half-time, pushed up in support of Harry Grant who had charged down field for his second, and pounced on a Jahrome Hughes for his third.

Cronulla caretaker coach Josh Hannay: “I thought for most of the night we looked a bit tired, and I don’t know why.

“We looked out on our feet on both sides of the ball. We’re disappointed. We wanted to go in the front door and not sneak through the back door [to the finals], but we’ve got a pulse and we’ll hope and pray things go our way on Sunday.

“We’ll be hoping they [the Warriors] play the game of their life on Sunday.”