Kurtley Beale says Waratahs-Brumbies derbies bring out the best in players and he hopes that is the case this week after NSW slumped to a new low on Friday night.

The 51-14 loss to the Chiefs was concerning on almost every level, particularly given the second-half capitulation that left coach Rob Penney fuming at in his post-match press conference. 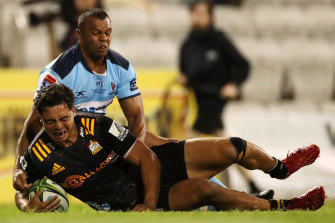 Kurtley Beale dives in vain as Anton Lienert-Brown scores for the Chiefs. Credit:Getty

The Brumbies, who thumped the Sunwolves hours earlier in Wollongong, will be licking their lips at the prospect of taking on a wounded Waratahs outfit next Sunday.

Dan McKellar's Brumbies are working in unison, having won four of five matches, compared to the Waratahs who have four losses from five matches.

Given the calibre of players NSW have been blessed with in recent years, it is hard to fathom that the Waratahs are staring down the barrel of missing the finals four times in five seasons.

NSW have underperformed in these derbies in recent years, having lost six of the past seven since 2016, and on the evidence of this season, there is little to suggest they will turn that around.

“It’s another great opportunity for us as a squad to really turn things around,” said Beale, whose own performances have come under the microscope as the Waratahs’ most senior player.

“The Brumbies don’t need any extra motivation. They’re going pretty well at the moment. These rivalries certainly get the best out of each other. It will be a great opportunity for us to see where we are against one of the best teams in the comp at the moment.”

Pride isn't the only thing that will be on the line. Wallabies jerseys will also be up for grabs.

New Australia coach Dave Rennie will be watching eagerly from the northern hemisphere to see whether Beale can find the spark against the Brumbies' Tom Banks, who has been in excellent form this year.

Another who will be eager to get his hands dirty is Will Miller, the former Waratahs back-rower now at the Brumbies. Although Miller did play a handful of games at No.7, he was stuck behind Michael Hooper for the most part.

Miller’s prowess over the ball could be a trump card for the Brumbies given the Waratahs are still working out their best back-row combination and not getting as much pay at the breakdown as they would like.

The last time the sides met the Brumbies prevailed 35-24 in Sydney, but there has been a high turnover of players on both teams since then.

The Waratahs are hopeful captain Rob Simmons will return from an ankle injury for the Brumbies clash, but Penney said halfback Jake Gordon was set to miss the match.