The Queensland government will begin talks next week with the Queensland Rugby Union and SANZAAR about offering to host the Sunwolves Super Rugby team during their trip to Australia that could drag on for longer than a month due to the coronavirus outbreak.

SANZAAR announced on Friday morning that two Sunwolves matches in Osaka and Tokyo next month would be moved due to advice from the Japanese government around the spread of the disease. 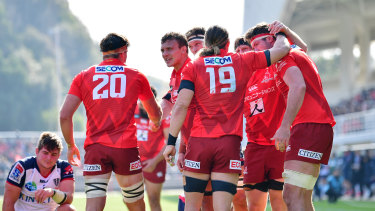 The Sunwolves are set to be in Australia for over a month due to the threat of the coronavirus outbreak in Japan.Credit:Getty

The Waratahs have agreed to host a triple-header next Friday, while the Reds will accommodate the Sunwolves a week later.

Japan’s only Super Rugby franchise, who are playing in their final season in the competition, were scheduled to host the Brumbies next Sunday but will now play their match two days earlier in Wollongong at WIN Stadium in the lead-up to the Waratahs’ round six clash with the Chiefs.

The Sunwolves-Brumbies match will kick off at 2.45pm, while the Waratahs will get underway at 7.15pm.

There is a gap between the matches due to broadcasting schedules, with the Crusaders playing the Reds at 5.05pm.

The Waratahs did not request for the matches in Wollongong to be brought closer together because they had already planned an Illawarra versus Hunter curtain raiser fixture.

The time between Super Rugby matches is also beneficial to ensure Sunwolves and Brumbies players can leave changerooms before the Waratahs and Chiefs arrive.

A week later, the QRU and Queensland government have agreed to host the Sunwolves and Crusaders match before the Reds take on the Bulls at Suncorp Stadium.

The Reds are eager to make to the most of Queensland-based Crusaders supporters, who could attract anywhere from 3000 to 5000 extra people to the game.

However, the Reds will ask SANZAAR if the matches can be moved closer together, which would mean having to move the Blues and Lions fixture at 5.05pm (AEDT) the same afternoon at Eden Park.

With coronavirus forcing a number of sports to cancel or relocate events, the Sunwolves will spend over a month in Australia.

Their next four matches are against the Brumbies (Wollongong), Crusaders (Brisbane), Melbourne Rebels (Melbourne) and Waratahs (Sydney), with the last of those on March 28.

However, the team could spend much longer in Australia if the team does not want to or cannot return to Japan due to a more serious outbreak of the disease. In this case, the Sunwolves will be seeking a team base.

Stadiums Queensland, which reports into the Queensland sports minister's office, is set to discuss the possibility of assisting the Sunwolves in the sunshine state.

The Reds are set to play in Tokyo on April 5 but that fixture could be moved to Suncorp Stadium, which is free on that day, or to Townsville at the newly built Queensland Country Bank Stadium. An offer could be made for the Sunwolves to base themselves in Brisbane, near somewhere like Ballymore, or in Townsville so that it can travel to and from between matches.

NSW aren’t scheduled to head to Tokyo until early May for their away match against the Sunwolves.

SANZAAR chief executive Andy Marinos stressed the coronavirus situation was being monitored closely and confirmed no plans for Sunwolves matches in April had been finalised.

"Super Rugby has been very aware of the effect and ongoing concerns around the coronavirus and it was very clear that we had to make changes to the match schedule to conform with Japanese government requirements and health authority directives," Marinos said. "For the integrity of the tournament we also believe relocating the matches was the right thing to do regardless of the complexities involved.

"Due to the fact that the Sunwolves were due in Australia for two matches following the Brumbies and Crusaders matches in Japan … this has enabled us to create a series of double-header matches which we hope will prove popular with rugby fans in Wollongong and Brisbane. I urge fans in both cities to come out and support not only their team but also the Sunwolves who now have an extended stay in Australia."