The AFL insists it does not want the bump to die but is adamant it wants to strengthen the duty of care players show for each other, on a day the AFL’s competition committee delved into several issues impacting the game.

The league’s think tank met over a video link on Tuesday for two hours, although AFL Players Association president and Geelong star Patrick Dangerfield – who continues to call for shorter quarters and a longer home-and-away season – was an apology. 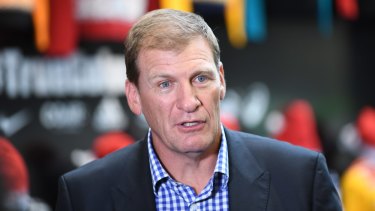 While AFL operations general manager Brad Scott said the league was looking to solidify recently introduced rules, including retaining this year’s “stand” rule for the man on the mark, the issue of player safety and duty of care remains a hot topic.

“My view is that players should be allowed to contest the ball but the clear message we are giving to clubs and players is that if you contest the ball and you are late, and you hit the opposition player in the head, you are going to be in trouble,” Scott said.

“I am not sure if we are going to see harsher penalties. We are just going to do our best to clarify what is acceptable and what isn’t. The onus is on the player. If you choose to bump and hit the opposing player in the head, then you are going to be in trouble.”

“It’s a forward step, that is no question, but the key problem is the transfer of energy when the bodies collide and this energy transfers up to the brain, which absorbs that transfer of energy. It’s not necessarily when there is a head collision,” he said.

The committee will meet again in January, with any recommendations to go before the AFL Commission. Any change could see the gradings of a head-high incident lifted to reflect the severity with which these clashes are now held. 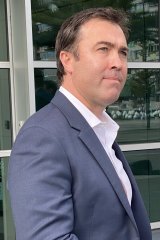 The committee was shown a raft of head-high incidents from 2013, and agreed there had been considerable change in the duty of care. The league this year introduced a minimum 12-day break for players diagnosed with concussion.

There were flashpoints through the 2021 campaign where decisions to bump or tackle a player while pinning an opponent’s arms split the football community.

The bump became a major topic when the AFL referred Adelaide’s David Mackay to the tribunal for his controversial clash with St Kilda’s Hunter Clark, despite the fact the Adelaide midfielder was not originally charged over the incident. The bump left Clark with multiple jaw fractures, with the committee told on Tuesday he still has ongoing challenges. However, Mackay was cleared by the tribunal of a rough conduct charge.

While there were differing views on the bump, the committee and AFL agree they will do all they can to ensure the health and safety of players remains paramount.

Scott backed match review officer Michael Christian to retain his role, coming after The Age reported Christian had yet to be told if he would retain the role for a fifth year. Scott said there could be “tweaks” in the clarity of the guidelines Christian followed, admitting the penalties he imposed were an “ambiguous area” for supporters to understand.

The pinning of the arm when tackling remains a contentious point, and works into the debate over whether the severity of any injury should be factored into any penalty. There were some perceived inconsistencies last season.

Tom Hawkins was cleared by Christian for a tackle on Darragh Joyce in round 22 that left the Saint with concussion, yet on the same weekend Western Bulldog Zaine Cordy was charged with rough conduct for a dangerous tackle on Jacob Koschitzke, although the Hawk was not concussed and played on. Cordy was given a $2000 fine with an early plea. 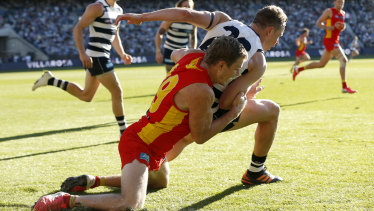 In the spotlight: Nick Holman’s tackle on Mitch Duncan during the 2021 season.Credit:Getty Images

There was also Nick Holman’s tackle on Mitch Duncan at GMHBA Stadium, which left the veteran Cat concussed. Despite Holman winning a free kick for holding the ball at the time, he was handed a two-match ban, only for it to be overturned by the tribunal.

The AFL introduced the ‘stand’ rule on the eve of last season, where players weren’t allowed to deviate once an umpire had set the mark. While the rule has sparked criticism, it has helped open up play through the centre corridor.

The AFL is keen to keep play moving, with Scott adding the AFL will take a “dim view” on players who do not return a dead ball to a player or umpire promptly.

“The has been a creep in that area over time,” he said.

Scott said there had been no change – at this point – to having three players plus a medical substitute on the bench. The Age had revealed the committee had previously discussed allowing the medical sub to be used in the final quarter regardless of any injury.

Reasons behind a dip in scoring this year were not on the agenda.

Dangerfield wants the length of quarters to be 18.30 minutes plus time on (they were 16 mins plus time on amid the fixture squeeze of 2020) but the AFL has rejected this. The AFL Players Association told The Age it still favoured shorter quarters, which would allow teams to play more matches off five-day breaks.