St Kilda coach Peta Searle has highlighted the heavy on and off-field cost of serious knee injuries for semi-professional AFLW players after Saint Tarni White became the 11th player this season to go down with a suspected torn anterior cruciate ligament.

White, who left the field in tears moments into Sunday's one-point loss to Fremantle, appears to be the latest casualty of an alarming trend, while Collingwood star Ash Brazill suffered a suspected ACL rupture against Melbourne on Friday night. 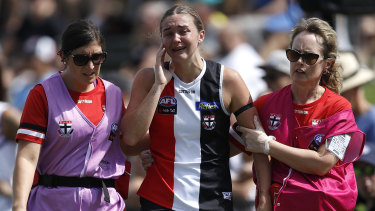 Women are between five and eight times more likely to suffer ACL injuries than men. The Demons have been hit particularly hard, accounting for four of 11 cases since the start of the pre-season.

The AFL has undertaken several initiatives in recent years to address this problem, working with La Trobe University to undertake research into the area, while also developing a “Prep to Play” program to help with injury prevention exercises. The league has also indicated it is keen to explore a possible link between the menstrual cycle and ACL injuries.

Brazill, also an elite netballer, was pushing to return to the Australian Diamonds side this season but will likely miss the whole netball season while White has a day job at the Brighton Hotel.

Searle said players would continue to push themselves but were making huge sacrifices off the field. 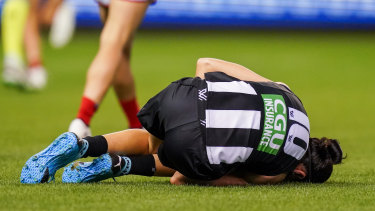 Down and out: Collingwood’s Ashleigh Brazill.Credit:AAP

"Tarni works down at Brighton Hotel, so potentially she won't be able to do her shifts and has loss of income. It does hurt, not just in terms of football but outside," Searle said.

"But they just want to play and they are willing to risk things, give up things to do so.

"They go from five days a week [work] to four, they drop subjects at uni or defer uni. The girls go into a financial deficit to play but they are so passionate about it."

Dr Peter Brukner, Professor of Sports Medicine at LaTrobe University, said AFL was facing a serious problem in the early years of the AFLW competition with so many players new to the sport.

"It is a serious concern and the rates but it is not too dissimilar to other female sports where rates of ACL injuries are significantly higher in females than males," Dr Brukner said.

Brukner has urged coaches and administrators from the top level to Auskick to do more strengthening work with female players with several programs, including the AFL's Prep to Play video available, on the internet.

"The issue is how committed clubs are to these prevention programs because they take time," Dr Brukner said.

"The problem with AFLW is they have limited time, there are restrictions on the time they can spend at the club and time they can train. 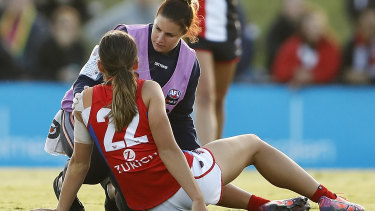 Toll rises: Maddy Guerin is the fourth Demon to rupture her ACLCredit:Getty Images

"Also significant restrictions on the amount of support staff they can have. All that contributes.

"If the coach has choice spending 15 minutes on an injury prevention program or a skills program they will probably choose the football side of it.

"That's an issue and something the AFL will have to address."

Fremantle coach Trent Cooper said his side worked on the those exercises regularly and he also worked with state under-18 coaching staffs so similar programs were passed down and used.

There is only a limited amount of research available on women playing Australian rules although much more research is being done.

Fremantle midfielder Hayley Miller is a physiotherapist by trade and is well aware of the problem.

"Knowing the rate of ACL injuries in general for women in all sports, it's not just in football," Miller said.

"With us having a higher profile now, you are seeing it each week and there has been a lot this season.

"Seeing Ash Brazill go down the other night, it's a massive loss for women's sport.

Dr Brukner said one positive was that as AFLW grows, more "footballers" will be trained as juniors and come into the sport better prepared.

"The lack of experience of AFLW players in playing football, who haven't had a long history in football, it may be that relative inexperience may be a factor," Dr Brukner said.

"We are not certain about that but as time goes on we will see more and more footballers coming through rather than netballers or basketballers who have swapped sports.

"That may be an optimistic note."