For years the NRL has searched for the face of the game to launch the start of the season, now they've found the voice of the game.

Melbourne Storm and NSW State of Origin star Dale Finucane has been entrusted with the responsibility of launching the season next week with an acoustic rendition of Tina Turner's Simply The Best. 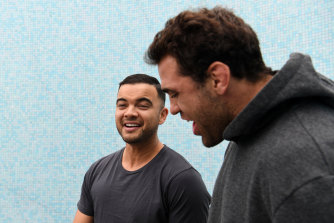 Dale Finucane, right. with Guy Sebastian during Blues camp in 2019. Finucane will perform Simply The Best at the NRL season launch next week.Credit:NRL Imagery

The music enthusiast, who unearthed his vocal and acoustic ability last season, has been invited by the NRL to perform the iconic song 30 years after it became the game's anthem.

The governing body has worked overtime to strike a deal to celebrate the three-decade anniversary, choosing one of their own to kickstart the campaign.

"I was a little bit shocked initially when I was asked, because usually they source actual musicians for these sorts of things," Finucane told the Herald. "But once I thought about it. I wanted to do it. The chords in the song are quite simple. I thought I had to tune it down a little because my voice is a bit husky and it won't reach the high notes of Tina and Jimmy Barnes. I've toned it down to suit my voice.

Finucane, who will both sing and play guitar, has been practising around the clock, squeezing rehearsals in between a gruelling pre-season campaign under Storm coach Craig Bellamy.

Finucane will fly to Sydney next Thursday morning to perform the song at the launch in Alexandria that night, before heading straight back to the airport to catch the last flight home to Melbourne to ensure he doesn't miss the Storm's Friday training session at 8.15am.

He hasn't told many of his Storm teammates about it, however there'll be no avoiding Cameron Munster and Cameron Smith on Thursday night.

"I've kept it pretty quiet, none of the boys really know," he said. "But both Camerons are travelling up that day and I'll be avoiding eye contact with them. I know that if I catch eyes with Munster he will be pulling a face and being cheeky. I'll probably stuff my words and lose my chain of thought. I can tell you now, I'll be finding out where they are sitting pretty early and avoiding them."

Finucane will perform alongside Melbourne musician James Marris, who is a regular at Storm functions.

"That'll help me if I stuff up," Finucane said.

"It should be pretty straight forward. Two people, no backing, two guitars, myself doing the bulk of the singing. It's a little bit of an acoustic version."