The winless Waratahs are on track to earn the tag of being the worst NSW side in Super Rugby history.

Friday’s 33-14 loss to the Rebels at AAMI Park in Melbourne continued the intense pressure on coach Rob Penney and his inexperienced side. 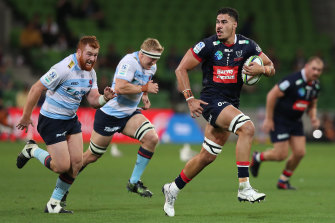 Trevor Hosea leaves the Waratahs in his wake.Credit:Getty

Penney’s side has conjured just 47 points from four games this year. On average, that’s just under 12 points a game. If that rate continues, they will easily eclipse the 2009 team, which managed only 18 points a game but finished fifth.

NSW have also reached a point seen just once before in the professional era. Only once in the past 25 years have the Waratahs finished the season with a points differential worse than minus 100. That was in 2017, when they finished on minus 126.

Heavy losses to the Reds, Brumbies and Rebels have already seen the differential sink to minus 108.

Then there is the statistic that really matters: wins and losses. No team in Waratahs history has won less than four matches. 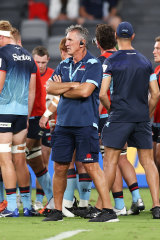 Already 0-4, NSW will face the two best teams in Australia and five New Zealand franchises in their nine remaining matches this season.

The statistical case is compelling: many will regard this as the worst Waratahs team in history.

On the field, one of the many concerns is the team’s propensity to make the same mistakes, week after week.

“We need to be much more improved defensively, through midfield, and be more disciplined,” chairman Roger Davis said. “They’re the key failings, as I see them.

“When you look at our performances over the last four matches now, they’re familiar scenes.

“You’d like to believe you can learn from your mistakes and your failings, but it is a young side and arguably an inexperienced side, despite having a number of Wallabies [squad members] there.”

Despite the dismal start to the season, Penney’s job remains safe as Davis looks north of the border for inspiration.

“We still have 30 per cent of the team out through suspension or injury, including our captain,” he said. “That’s a tough headwind to deal with. The side as a whole have to deal with this issue. Everyone forgets that Queensland struggled like this.

“Brad Thorn was on his backside, desperately trying to hang in. They lost match after match. They stuck to their guns, rebuilt their list, supported their coach, had confidence in their future and their program, and are now playing some really good footy.

“We hope the same will happen for us. But these things don’t just turn on a dime.”

Former All Blacks playmaker Andrew Mehrtens believes the Waratahs’ primary problem in attack is their predictability.

“They go three or four phases in structured play and they are then too structured and far too predictable,” Mehrtens said.

“But you can’t suddenly change the instincts of players. If they were younger and being coached at schools and colts to play structure, you can’t suddenly expect them to make better decisions on the field. They just keep going back to the tried and true.

“There is a lot of that, unfortunately. It means they are very predictable.”