With three rounds left, there are now 13 teams that can realistically still play finals football in what has proven to be another bizarre season.

The Western Bulldogs’ strong win over Adelaide and Geelong’s controlled performance against North Melbourne means the two clubs are firming for the minor premiership, but Melbourne and Port Adelaide are still in the hunt.

And down the other end, does anyone actually want eighth spot? Greater Western Sydney’s loss to the Power and Fremantle’s gutsy effort against Richmond have added to the intrigue, while Carlton are suddenly a chance, having last week appeared to be preparing for next season.

Here is the state of play heading into round 21…

WE SAY: The Dogs took care of business against Adelaide and may need to win their remaining three matches to claim the minor premiership. The loss of key defender Alex Keath (hamstring) hurts but Ed Richards (concussion) could return this week. The Dogs have excellent depth and several match winners. They couldn’t be better placed. 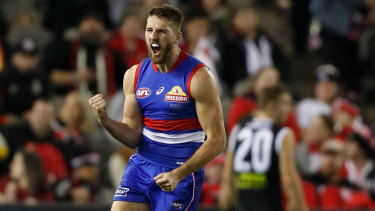 Marcus Bontempelli revels in the moment after booting a goal against St Kilda earlier in the season.Credit:AFL Photos

WE SAY: With their final three matches at GMHBA Stadium, the Cats have all but secured a top-four spot already. It’s been an incredible season and if you take away their round 15 brain fade against Brisbane, the Cats’ last loss came at the start of May. Chris Scott’s biggest challenge heading towards September will be team selection. Jeremy Cameron and Mitch Duncan will be automatic selections when they return from injury in the next month, but who will make way? Shaun Higgins now appears to have confirmed his spot in the Cats’ best 23.

WE SAY: Simon Goodwin’s quest to find the Demons’ most efficient forward line has been well documented, but he must now do it during a pretty difficult lead in to the finals. The Demons made a statement by demolishing the Suns on Sunday but a trip to Perth to face the Eagles will be a challenge, although the Eagles are no longer the force they once were. Clayton Oliver recently said that his side lifts for the big occasions . They’re going to need to in order to secure that vital double chance. 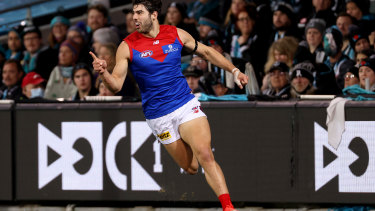 WE SAY: As we build towards September, the Power are one of the more difficult clubs to read. No one seems to be talking about them as a genuine premiership threat, but they’ve won eight of their last 10 – including a fighting effort against the Giants on Sunday – and their next two games are winnable. If they can win those and get valuable game time into Connor Rozee, Xavier Duursma and Zak Butters, the Power may be able to recapture the form that made them preliminary finalists 12 months ago.

WE SAY: Yes, the Swans are the story of the season so far. But you know what? They’re not here to make up the numbers. In fact, they can push for a top four spot for they are clear favourites to win their remaining three matches and head into September on an eight-game winning streak. Four of their past five wins have been against top eight sides, while Essendon were knocking on the door heading into Sunday’s shootout at the MCG. Lance Franklin is closing in on 1000 goals and the Swans are getting closer to one of their most remarkable seasons in recent times.

WE SAY: The Lions are fading, and coach Chris Fagan isn’t happy. A top four spot no longer appears possible. They are beginning matches poorly, as again was the case in a surprise loss to Hawthorn on Sunday, and injuries appear to be taking a toll. Now comes a run home against the spirited Dockers and the attacking Magpies before a final round clash with West Coast. Much will depend on Joe Daniher and Charlie Cameron.

WE SAY: They breathed a sigh of relief when they held on against St Kilda but were left stunned when they conceded the opening eight goals in a loss to the Magpies on Saturday. Low percentage is a potential issue in what shapes as the toughest month in Adam Simpson’s tenure. They now face a Demons unit hunting a top-four berth while the Dockers are determined to hold on to eighth spot. Tim Kelly is not the player he was at Geelong.

WE SAY: They surprised many by toppling Richmond, despite the absence of Nat Fyfe and Michael Walters. Andrew Brayshaw has been superb and shapes as a future captain, while Adam Cerra was pivotal against the Tigers. The Lions are smarting but the Dockers are now favourites. Win that, and then topple the Eagles, and eighth spot is there for the taking.

WE SAY: It’s hard to work out the Giants. Their win over the Bombers had them well-placed to make the top eight but the loss to the Power on Sunday has sparked more questions. The trip to Geelong this week is a tough ask but they should knock off the Tigers next week. Then comes the Blues, who are back in the finals hunt. Match-winner Toby Greene needs to provide something special.

WE SAY: The Bombers have made significant progress this season but a return to the finals in Ben Rutten’s first season as coach may be a step too far. The shootout loss, including an interchange bungle, to the Swans stings, and they must now regroup to face the Bulldogs, who are among the hottest teams. There should be a win over the Suns, but the Magpies have hit form. They need Darcy Parish, Dylan Shiel, Jake Stringer and Zach Merrett to produce something special. 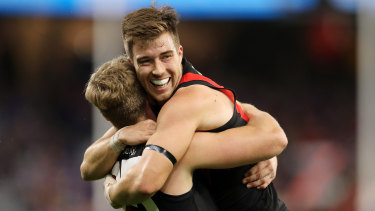 Zach Merrett and Jake Stringer have been pivotal for the Bombers this season.Credit:AFL Photos

WE SAY: The Tigers continue to back their system and believe they can do damage in September – should they get there. The loss to the Dockers really hurts, with Damien Hardwick appearing to realise his side will need to a new gameplan next season. The Kangaroos have rebounded since the bye and will be tough this week. The clash against the Giants will be critical. Dustin Martin is gone but there is still enough talent to slip into September.

WE SAY: The Blues appeared out of calculations last week, such was their damning form against North Melbourne, but the return of Harry McKay and Jack Silvagni’s work as an under-sized ruckman helped lead them to a big win over the Saints. David Teague will strengthen his hopes of saving his job should they make the finals but they almost certainly will need to win their final three matches to make the eight. They haven’t beaten a team that was in the top eight when they met.

WE SAY: It’s hard to believe the Saints are still in the hunt after their troubles earlier in the season. However, they continue to frustrate – the heavy loss to the Blues on Friday a case in point. Max King is showing why he is a star in the making but small forwards Dan Butler and Jack Higgins have gone missing. A tough run home could see the Saints lose all three matches, intensifying pressure on coach Brett Ratten amid an internal club review.