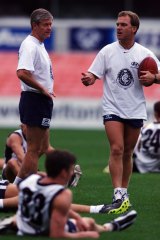 Sam Mitchell will have turned 40 by the time 2023 rolls around, making him a little older than Nathan Buckley, John Longmire, Ben Rutten and Simon Goodwin were during their first game in charge after brief periods as underlings to experienced premiership coaches.

Wayne Brittain was 42 when he assumed the top job at Carlton in an informal handover from coaching legend David Parkin but had not played in the league before coaching.

Longmire’s stint has been the most successful of the five, winning a flag just two seasons after taking over a finals team from Paul Roos and since making two other grand finals.

The club did not miss a beat under his leadership, with Roos a willing teacher.

Goodwin has experienced coaching’s highs and lows since in 2017 taking over – also from Roos – a Melbourne team in the middle of a finals and premiership drought. But he has held his nerve in tough times and has the Demons now heading in the right direction.

Roos’ stint at the Dees probably guarded a first-time coach from almost certain failure as much as it might have assisted Goodwin in the transition.

At the Bombers, Rutten has made a promising start to his career and it was helpful to him for John Worsfold to still hold the reins during a pressure-filled season inside hubs, away from family, with wins few and far between.

Mitchell’s current circumstances seem most similar however to Buckley’s, who not only took over from a coaching icon in Mick Malthouse but, like Mitchell, is a former champion player at the club he wanted to helm.

In the modern era, that is hardly a forerunner to success. As coaches, Buckley, Michael Voss, James Hird and Brett Ratten all struggled to replicate what they achieved as a player.

Only Worsfold and Luke Beveridge have won premierships this century at the club they played for and it’s no disrespect to Beveridge to say he wasn’t an iconic player at the Western Bulldogs.

Mitchell will succeed Clarkson, but will he succeed like Clarkson? That is a question he will struggle to escape.

WAITING IN THE WINGS