More than four decades after his last game for the club, John Higgins remains a Roosters supporter.

The framed jersey in the spare room is just one of the pieces of red, white and blue memorabilia adorning his Woy Woy home. When the Sun-Herald visited him during the week, he was watching yet another replay of the tricolours’ World Club Challenge win over St Helens. 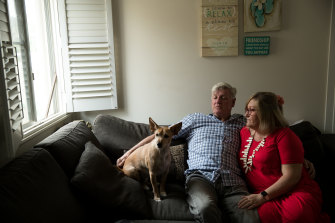 Which is why the decision to sue the Roosters is such a difficult one. He is just the third player in rugby league history to take legal action over the handling of head knocks.

“But I don’t want to cripple my family because people who should have been looking after me knew about the problems and should have done something about it,” said Higgins, who will donate his brain to the Australian Sports Brain Bank to aid concussion research.

The problems Higgins refers to are the headaches, the disorientation, the memory lapses and the mood swings – problems Higgins believes stem from the Roosters’ mismanagement of at least three concussions suffered during the 1978-79 seasons.

I’m grieving the loss of the life that I thought we were going to have.

The former winger has instructed Mitry Lawyers to commence legal proceedings against the club.

Higgins made only three first-grade appearances during a long stint at the Roosters. He made his debut after Kerry Boustead broke his ankle in a match against Canterbury on July 8, 1979. He claims the club breached its duty of care in allowing him to return to play after a series of head knocks, one of which resulted in a stint in hospital. However, he was allegedly cleared to play the next game despite independent medical advice against the move.

Higgins, 62, is unable to hold down a job, has been forced to forfeit his driver's licence and requires almost constant supervision. 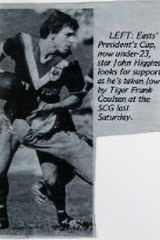 “I mean it when I say I love John, but I’m grieving the loss of the life that I thought we were going to have together,” said Higgins’ wife, Simone.

“I wouldn’t be anywhere but to look after him. But in one way I feel we’ve been robbed of what we should be doing at our age.

“John pretty much has to have a full-time carer. He’s 62 years of age and can’t be left at home alone for any length of time. That’s not normal for a 62-year-old. We should be really starting to live our life. The kids are off our hands and we thought we’d be travelling the world, but that’s done.

“When I’m not working, I’m a full-time carer for my husband rather than a wife.

“He’s obviously not the only one; there seems to be plenty [of former footballers] out there who are suffering.

“You can’t tell me that somebody didn’t have some ounce of concern that these groggy, starry-eyed [players] – looking like they are drunk or stoned playing football – is right. 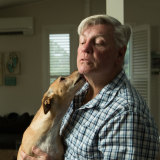 “I’d be functioning fine and then all of a sudden I’d take one step and bang,” Higgins said of the disorientation he now often experiences. “I’d have to stand still to work out where I was, what I was doing. I’d have to sit down because I was too dizzy.

“I couldn’t ask people for help because I couldn’t talk. I found if I just waited, something would be all right, whether it was my eyes, my voice or my ability to walk.”

Mitry Lawyers initially attempted to launch a class action against the NRL’s handling of concussions, but found former players were reticent to join because of the associated publicity. Instead, the firm will act for individual clients such as Higgins on a no-win, no-fee basis.

“It takes a level of courage to come forward because there is a reticence for people to speak out about these issues,” said Mitry Lawyers partner Rick Mitry. “I am glad that someone who is suffering has decided to step forward and finally do something about it.

“There is no need for people to be embarrassed about suffering these sorts of injuries. It’s healthy and cathartic to talk about it and it empowers others to do likewise.”

So far, only former Newcastle winger James McManus and ex-Parramatta forward Brett Horsnell have taken action against their former clubs. Mitry hopes Higgins’ story will embolden other former players suffering in silence to also seek the help they need.

“This is quite a pivotal moment,” Mitry said.