Mark O’Meley has known for a few years that Blake Taaffe could cope with the pressure of playing on the big stage after a late call-up.

Taaffe will wear the No. 1 jersey for South Sydney against Penrith on Sunday in just his eighth NRL game, which also happens to be the grand final.

The 22-year-old was a surprise pick by Wayne Bennett to replace star fullback Latrell Mitchell after he was suspended four weeks ago, but Taaffe has looked remarkably cool since he started wearing the No.1 jersey.

Just as Bennett has been prepared to back the youngster with the Irish surname, O’Meley did likewise a couple of years ago when coach of the NSW under-20s Origin team.

Melbourne’s Cooper Johns and Canterbury’s Brandon Wakeham were named in the Blues halves but had to pull out because of club commitments.

O’Meley had Penrith’s Matt Burton come into five-eighth, and having worked with Taaffe on the Central Coast, did not hesitate in wanting him to give him his shot. 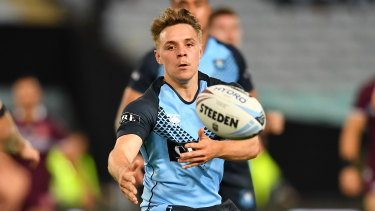 Pressure? What pressure? Blake Taaffe is used to thriving on the big stage after a late call-up.Credit:NRL Photos

Taaffe was playing with North Sydney at the time after being cut by the Sydney Roosters a year earlier. O’Meley had to convince NSW coaches Brad Fittler and Danny Buderus it was not a case of “playing favourites”.

“I told them, ‘don’t worry, this kid is an NRL player’,” O’Meley said. “He’s always been a great kid, never a hassle, never had agendas, and forever reliable. The pressure doesn’t get to him.”

After taking a call from O’Meley on a Friday, Taaffe played for the Blues the following Wednesday and helped steer them to a win over the Maroons. Burton, who plays for the Panthers on Sunday, won man of the match and Panthers duo Spencer Leniu and Stephen Crichton also featured in that NSW team. It was the same night James Tedesco scored in the corner to seal a memorable origin series win for the Blues in Sydney.

Taaffe said this weekend’s soldout Suncorp Stadium would be the biggest crowd he has played in front of since that Origin night. 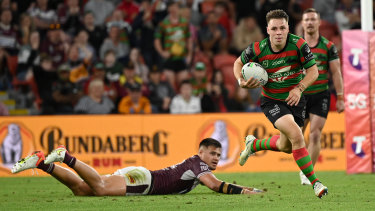 ”I try not to think about [the pressure],” Taaffe told the Herald. “I’m the type of person where the less I think about it, the less I stress. I just like hanging out with the boys and talking crap.

“Latrell has been massive for me. He’s done it all, won two premierships and played for his state and country.

“He just keeps telling me to be myself and not over-play my hand. He deserves a (premiership) ring, he’s been here through thick and thin and we can’t thank him enough.”

Such is Taaffe’s form that there has already been talk about how incoming Souths coach and current assistant Jason Demetriou plays Taaffe and Mitchell in the same backline next year. Mitchell can also play centre and could even step up to replace Adam Reynolds as a halves option with Cody Walker.

Taaffe is also a halfback, but said he enjoyed it most at the back.

“I can see myself in the halves if I’m given that roaming role,” Taaffe said. “As long as I’m in the 17 I’m not fussed. But fullback is where I’m most comfortable. Latrell is still our No. 1. He’s just loaned his jersey to me. I’ve still got a lot to learn about it.”

After one bobble, Taaffe did well to survive Nathan Cleary’s relentless aerial assault a few weeks back, but he is expecting more this weekend.