This was the first time for 10 years a Sale side had taken to the field without Steve Diamond in overall charge but the Sharks were told they had done their former director of rugby proud.

Diamond left the club he has been at for the past decade for personal reasons on Tuesday and it gave Paul Deacon — the new man in charge — just a handful of days to prepare for a trip to Toulon.

It would have been a tough start to the new Heineken Champions Cup season even without the off-the-field upheaval and Sale were blown away for the first 60 minutes to fall 26-0 behind. 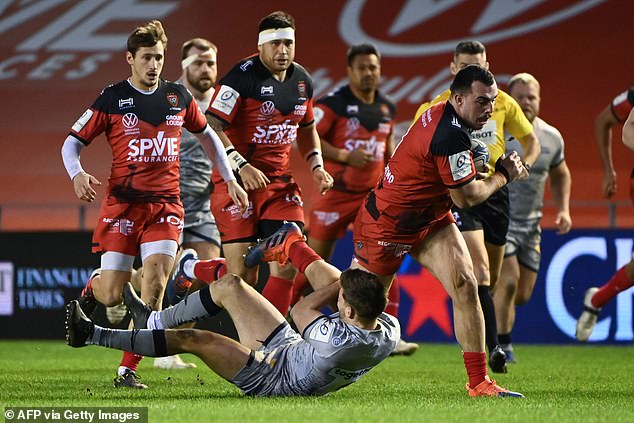 They nonetheless rallied to score consolation tries from Marland Yarde and Sam Phillips. Toulon wings Gabin Villiere and Ramiro Moyano scored a try apiece, while their outstanding France fly-half Louis Carbonel was man of the match as he kicked 16 points. ‘I’m disappointed we didn’t get the result. I think the lads did Steve proud. He put this squad together. Hopefully he was watching and enjoyed it,’ said head coach Deacon.

‘We coughed up a bit of ball and there were a few unforced errors which cost us but I can’t knock their effort. It was what I was after this week, the togetherness was fantastic with the way we fought back in the last 20 minutes. We threw the ball around and that’s how we want to play.

‘There were a lot of positives to take. The scoreboard got away from us in the first half which was unfortunate, but the lads stuck at it and that’s the pleasing thing.

‘It’s always disappointing when you don’t get the result. Next week is a new week and hopefully we can improve on that performance.’ 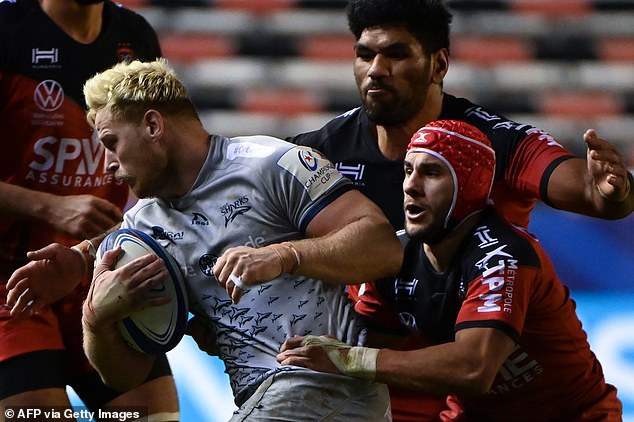 Sale started well but two penalties from Carbonel made it 6-0. Pure magic from Carbonel then created Villiere’s effort as the fly-half collected his own kick ahead before unleashing the winger.

Another Carbonel penalty made it 16-0 at the break and three more points from the star man came at the start of the second period. An outstanding offload from veteran Italian No 8 Sergio Parisse created Toulon’s second for Moyano, but Sale hit back with Faf de Klerk and Sam James providing impetus from the bench.

James kicked ahead and Sam Dugdale’s fine hands sent wing Yarde in at the corner. Lock Phillips then crashed over from a De Klerk pass but it was not enough to haul back the deficit.

Yarde said: ‘I think we troubled one of the best sides in Europe. In the first half we could have kept the ball a little bit better, but I like the fight we had in us in the last 20 minutes.

‘I thought we dug deep and we knew that, if we kept going throughout the game, we would get our time. We fell just short but, looking ahead to next week, if we can join up some of our errors then I think we will get a better result.’