But bring up the prospect of two weeks on a suburban building site and the 20-year-old is quick to admit he has some concerns. 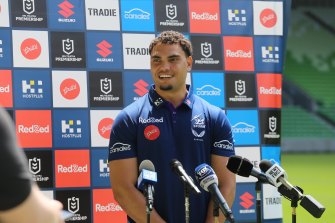 The Queensland origin outside back has arrived in his new city and already feels part of the team, following the support of Justin Olam and the good fortune of one of his best mates also joining the club in Cole Geyer, son of club great Matt Geyer.

Coates had his first day at the Storm on Thursday, undergoing physical testing and speaking to the local media. He has some big shoes to fill on the wing, with leading try-scorer Josh Addo-Carr departing for Canterbury.

“I came here to improve myself, I didn’t really think about what the other people have done here,” Coates said.

“The players who have put on this jersey have built a legacy and I respect that, but I want to make my own legacy and improve on certain aspects that will help the team on the field.

“If I have a good pre-season then hopefully I will get to pull on that purple jersey, but there is a lot of hard work I have to do first.”

Storm coach Craig Bellamy has long demanded his new recruits spend two weeks working on a building site along with pre-season training and Coates said it was only a couple of weeks until he will trade his footy boots for work boots.

“I’ve never picked up a tool in my life, so we will see how we go with that aspect,” Coates said with a nervous laugh.

“Hopefully I go all right, but I’m probably more nervous about that than the rest of the pre-season, hopefully I don’t pull up with any injuries from that.”

But the well-spoken Coates already appears to understand why Bellamy puts his recruits to work.

“That is the main reason why they are so good. With the work placement, it shows how grateful you should be for the opportunity you have,” Coates said.

“Not too many get these opportunities to come down to the Storm, so when you go into that work placement spot you want to do your best and follow that into training as it will prove what kind of person you are.

“You give your best effort and don’t quit – that is what Craig and the players want to see, someone who is reliable on the field and doesn’t give up.”

Coates’ move to the Storm was high-profile. The Papua New Guinea-born, Gold Coast-raised player left behind the Brisbane Broncos, the move appearing even more fitting when his former junior teammate Geyer chose to take up an offer with the Storm. The pair shares a house with another young player in Trent Loiero.

Coates and Geyer played at Currumbin Eagles from under-9s to under-17s and went to school at Marymount College.

“Cole was my best friend growing up, we played junior footy together since under-9s, went to school together – did everything together,” Coates said.

“It’s a dream come true, we spoke about playing in the NRL together one day, and we are a step closer to that now.”

But Coates revealed he didn’t know Geyer was signing with the Storm.

“It was a bit of a surprise to me, I signed and then I found out two weeks later that he signed too. It’s a fairytale sort of thing for us,” Coates said.

“We’ve been loving our time so far. We arrived here on Monday and have been eating at cafes for breakfast, lunch and dinner – we heard how good the food is and it’s lived up to the expectations.”