A few years ago, when asked for advice on how a club could keep a sensitive bit of information from the prying press, Phil Gould just shook his head.

“There are no secrets in rugby league,” he said.

But Keith McCraw can’t help but chuckle to himself.

McCraw is the president of the powerful Souths Juniors, which has nursed half-a-dozen stars into the Rabbitohs’ grand final team, including the most inexperienced player to feature in an NRL grand final, rookie fullback Blake Taaffe.

“But no one at Souths knew it until after he’d been signed. I never told them.” 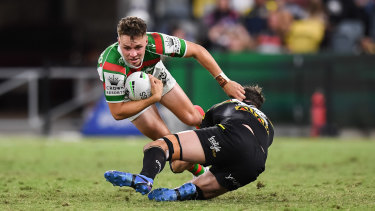 If South Sydney’s most experienced player, Adam Reynolds, who will play his final game for the proud club in the grand final against Penrith, learnt to play rugby league kicking Steedens around garbage bins a couple of streets from Redfern Oval, Taaffe was basically born with a red and green nappy waiting for him.

As always with rugby league, when one walks out another is ready to walk in. But not even Reynolds can boast the South Sydney pedigree of Taaffe.

Consider this: his great uncle, Kevin “Lummy” Longbottom won a competition with the Rabbitohs in 1967. McCraw is another great uncle. His grandfathers, Bobby Taaffe and “Chook” Lester, played in the same La Perouse team at Yarra Oval, whose canteen is still manned by Blake’s grandmother, Colleen, during the footy season. Blake’s father, Darren, was also an accomplished footballer, playing with La Perouse. He even temporarily kept driving his son to Sydney to play for them as an eight-year-old when the family moved to the Central Coast. Rising hooker Josh Cook, who will leave the Rabbitohs for the Bulldogs next year, is also a cousin. Blake would still represent the area in the traditional Koori Knockout, despite living up the highway.

“Trust me, he is about as South Sydney as they come,” McCraw says. “He’s always been attached to the La Perouse community. It’s a tight community. And Colleen is still in there serving the pies, hot dogs and sausage rolls in the canteen. 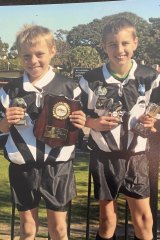 “Blake said if he was ever going to debut in the NRL, he’d like to do it under Wayne Bennett.”

But the NRL’s bolt-from-the-blue story of grand final week was almost over before it began – until Taaffe saw a surgeon who specialises in working on ballet dancers.

Taaffe’s late-season debut, in which Bennett gave him a handful of minutes off the bench in a 46-0 thrashing of the Broncos at Suncorp Stadium, almost didn’t happen after he hurt his ankle in the pre-season Charity Shield. Taaffe was advised to see Dr Kim Slater, one of Australia’s leading orthopaedic specialists, who had the call on whether to operate or not.

Dr Slater told him to be patient, even when it wasn’t healing as fast as Taaffe would have hoped. It came on the back of a year when Taaffe had barely played due to the pandemic.

‘Blake said if he was ever going to debut in the NRL, he’d like to do it under Wayne Bennett.’

“Ballet dancers are elite athletes, and I’ve worked with a lot of them as well as AFL, league and union players,” Dr Slater says. “The tricky thing is you can’t always tell whether or not it’s going to need surgery at first assessment. It’s a matter of reassuring the patient in the majority of cases: nature will heal the ligament without residual problems. But not all cases respond well.

“It’s fortunate for Blake his did [eventually]. Mat Rogers had the same injury when he was playing for the Wallabies.”

“It was rat shit,” he says. “It took him a while to get going. The boys said, ‘One day it’s going to click and it’s not going to hurt’. One day, it just came good. He was able to run with no pain. He felt like he was letting the boys down because he wasn’t playing. Now he’s got an opportunity he probably never dreamed of.” 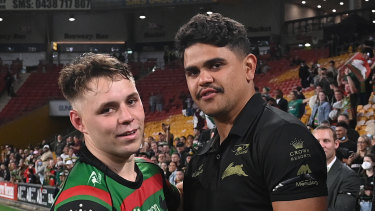 Blake Taaffe and the man he replaced, Latrell Mitchell.Credit:Getty

The bright lights of grand final week can make even the most hardened NRL players weak at the knees. Sometimes, they wait all their lives for a shot, and get swept away in all the hoopla of the season finale. Taaffe, who is yet to lose a game in his short NRL career, doesn’t seem like one who will.

Like all good South Sydney kids, there isn’t much love for the Roosters.

He was captured in the Roosters’ net while playing on the Central Coast, but couldn’t crack it for regular time in their under-20s side. He went back to playing A-grade up there, before former NSW prop Mark O’Meley recommended Taaffe to North Sydney’s under-20s coach at the time, Willie Leyshon, who had O’Meley’s son Jake in a team that was a feeder for the Rabbitohs.

Taaffe joined for match payments: $300 a win and $150 a loss. His first game was against the Roosters, who he promptly carved up, Leyshon later admitting “he didn’t fit in” with them.

“We probably opened the door for him, but he walked straight through and made sure the door didn’t shut,” Leyshon says.

“He was a standout. Even from the first training session we chucked him in at fullback, you could tell straight away. The way he moved across the ground, his footwork, his vision, he could pass both ways … we were fortunate. He got the opportunity there with us. It’s a brilliant story.”

And when Bennett finally gave him an NRL opportunity, he took it, and will again await Nathan Cleary’s soaring, swirling kicks in the grand final.

In just his second game on a wet night in Newcastle against the Cowboys, Taaffe dived over for his first NRL try. He celebrated by pretending to be a rower, a tribute to his mum Dorothy’s cousin, Gina Stewart, who died from illness last year. Taaffe’s family says she was his No.1 supporter. He will write her name on his wrist strapping before running onto Suncorp Stadium. 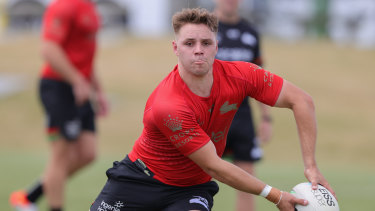 “We used to call her ‘Row Row’,” Taaffe says. “She used to sing that song to my nephew. He couldn’t say her name so he called her, Row Row. He was only six or seven. The name stuck with everyone.”

Taaffe could have been forgiven for thinking that game might have been the last of his season. But when Latrell Mitchell was suspended for six weeks for his high shot on former teammate Joseph Manu, which ended the year for both men, Bennett never blinked when it came to his replacement.

Darren says Blake is “half the size of Longbottom and probably 10 times as fast”. Taaffe embraced Mitchell after the Rabbitohs’ grand final qualifier win and was a long way from looking him in the eye.

How does a kid trying to find his feet in the NRL cope with the expectation of replacing his team’s best player in the shadows of the premiership post?

“But they’ve all been so good to him. They picked him up when he was down throughout the year and he wants to repay the faith they’ve had in him. I think he’ll move heaven and earth to win that grand final with them.”

Then, and maybe only then, will Rabbitohs fans start seeing a bright future beyond Reynolds, because the secret will finally be out.

“The first thing I said to him, ‘you got here on your own’,” McCraw says. “Here is a kid that has just showed all the kids at La Perouse and the Central Coast if you want to live the dream and work hard, it can happen for you.

“A lot of people think it’s who you are and not how you are. But he did it himself.”