Here’s a potentially frightening prospect for those AFLW midfielders hoping to curb dual sports star Monique Conti this season. The dynamic Tiger has played four AFLW seasons, but this is her first full pre-season, as her WNBL basketball commitments with the Southside Flyers have been put on hold because of the rejigged timings of both seasons.

“This will be my fifth year, third with Richmond but my very first pre-season. I am nervous. But to get a pre-season under my belt, I think that will help in so many different areas,” Conti said, now a fortnight back into training. 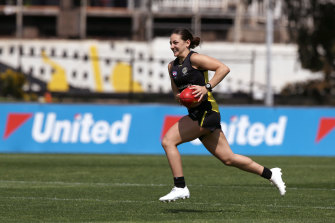 Star footballer Monique Conti is able to tackle an AFLW pre-season without basketball commitments for the first time.

“I think the first thing will be my match fitness, and just getting my hands on the ball a lot more, instead of a month or week before the season. I am a bit nervous, but it’s exciting and I am really excited personally to see what that means for me and how I am going to help the team in that regard.”

Not that finding the ball has been an issue, as she averaged almost 23 disposals per game last season.

At just 21, Conti already has a resume to die for. There were two years at the Western Bulldogs, the highlight a best-on-ground performance in the 2018 premiership. She was the best and fairest and an All-Australian a year later, before shifting to Punt Rd for the Tigers’ inaugural season.

In a tough year for the club, her dash and ball-winning ability culminated in another best and fairest, a feat she again enjoyed last season, when also named an All-Australian.

The Tigers finished 10th last season with three wins, having been winless in their debut season. Under coach Ryan Ferguson, complete with his “unique” style, says Conti, and skipper Katie Brennan, there is a renewed vibe at Punt Rd, with finals now in greater focus.

The addition of former Blue Jess Hocking, joining twin sister Sarah, will strengthen the side, while the Tigers are banking on the development of a swag of talent, including the consistent Ellie McKenzie and Stella Reid, the No.5 overall draft selection this year.

“Just the general energy around the group is different. It’s just so strong and a good vibe when you walk in,” Conti, aiming for an official leadership role, said. “It’s definitely been a rebuild – last year showed that we are on the way up.”

Conti was a WNBL champion with the Liz Cambage-led Flyers late last year, a modified fixture and season held in north Queensland allowing her to complete both sports.

“I went up to the bubble with the girls. It was different and challenging but because of the success, it was fun,” she said. “I love hot weather personally so that was a bonus.”

This summer’s AFLW season had been brought forward to December but was later shifted to an early January start because of Melbourne’s lockdown. Conti had opted to focus on an AFLW pre-season regardless, and not juggle a WNBL pre-season (that season is slated to begin on December 2), but she still may play basketball should it extend past her AFLW campaign.

“It will be tough to watch the girls playing and not be a part of it,” Conti said of the Flyers.

She said it was important sports administrators did their best to ensure women’s competitions did not overlap.

Melbourne’s lockdowns haven’t been easy on anyone. Conti says she has taken up walking to help stay mentally fresh, and regularly picks up a basketball with her younger sister, Gabby. She is also studying psychology.

As pre-season training ramps up, once again amid COVID-19 protocols, Conti hopes all players across the league will soon be double vaccinated to ensure there is no disruption once the AFLW season gets underway.

“I am fully vaxxed and I am feeling fabulous. Hopefully, everyone else gets on the same page just so we can open up sooner,” she said.

AFL trades 2021: Stay across the moves, news and what it all means as our Real Footy newsletter goes daily for trade period. Sign up to get it here.