Promising Hawthorn forward Mitch Lewis and Melbourne counterpart Sam Weideman could be in doubt for round one after appearing to suffer nasty ankle injuries during the Demons’ 32-point practice match win over the Hawks in Launceston on Friday night.

Lewis hurt himself in the final term and limped from the field in considerable pain with the assistance of the trainers, finishing the match with a big ice pack on his left ankle. 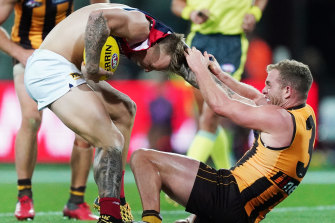 Weideman also hobbled from the field late, while Aaron vandenBerg took no part in the game after half-time as a precaution due to an apparent bruised foot.

Viney sling-tackled Stratton, leading the Hawthorn captain’s head to make contact with the ground, but the force did appear to be on the lower end of the scale. Meanwhile, Harmes jumped off the ground and bumped Patton in the chin, dazing the Hawks forward for a few moments.

Those concerns aside, Melbourne, who were only missing Christian Salem and Mitch Hannan, capped off an impressive pre-season, defeating the Hawks, who were missing the likes of Jack Gunston, Jarman Impey, Blake Hardwick and Ricky Henderson, 12.9 (81) to 6.13 (49), to make it three wins on the trot heading into the season proper. 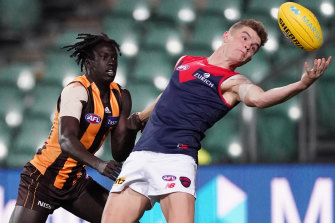 Bayley Fritsch, who kicked five goals, marks for the Demons.Credit:AAP

The match was an arm wrestle for the most part, with neither side managing to kick more than two goals in a row until early in the last quarter when the Demons broke the shackles with six consecutive majors to blow the inaccurate Hawks away.

Former skipper Viney was dominant with 33 disposals (23 contested) and 10 clearances and Steven May (21 touches and eight marks) did a great job in defence on Patton (one goal).

It was a sight for sore eyes for Hawks fans – Mitchell, the 2018 Brownlow medallist who missed all of last season due to a broken leg, kicking it to Jonathon Patton, the great forward hope from GWS. Mitchell executed his classy pass with the deftest of touches by foot, and Patton duly split the big sticks with a bomb from 50 metres out directly in front. The Hawks will want to see more of that in 2020. 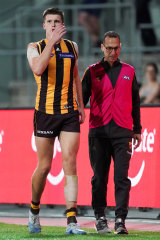 Mitch Lewis limps from the field after hurting his ankle.Credit:AAP

The play of the night came in the second quarter and belonged to the Demons: Steven May hoofed it magnificently from the kick-in onto Max Gawn’s chest in the centre square; Gawn proceeded to pass it further afield to Ed Langdon who ran inside 50; Langdon then handballed it to Bayley Fritsch who snapped truly from the forward pocket. It was beautiful end-to-end stuff and it was all over in a matter of seconds.

Harmes tried to escape Mitchell’s clutches late in the third quarter, but to no avail as Mitchell not only stopped Harmes in his tracks, but ripped the Demon’s jumper off his back for his troubles! The flesh-baring incident forced Harmes to run around topless for a few minutes, but it didn’t look like the 24-year-old minded showing off his chest tattoos too much.