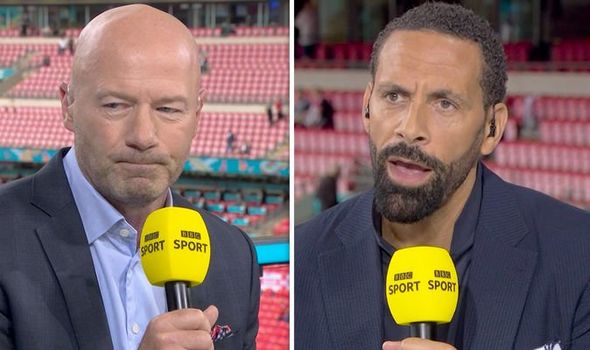 England legends Alan Shearer and Rio Ferdinand have both admitted their surprise at Gareth Southgate’s Three Lions starting XI for the match against Germany tonight. England take on Germany at Wembley in the last-16 of Euro 2020. Southgate reverted to a three-at-the-back formation after playing with four in defence for the three group stage matches.

Shearer and Ferdinand were both working for BBC as pundits on the match.

And they both admitted they did not expect England to line up as they did.

“Yeah it has [surprised me],” Shearer said.

“I thought he might have gone in with something similar [to the group stage], with four at the back because we obviously haven’t conceded and we have looked very solid.

“I think that it’s imperative that Phillips is given a bit more freedom to try and get further forward and help the [front] three.

“And of course with the two wing-backs with the pace and the ability of both of them to get up, it’s going to be a huge competition [between] Shaw and Kimmich, Trippier and Gosens.

“They’ve got to try and dominate and push those further back.”

“Yeah I am [surprised],” Ferdinand said.

“I’m surprised in one way but Gareth Southgate, knowing him being a defender when he played as well, so maybe not that surprised.

“But when you see the talent that we’ve got, especially in the attacking wide areas, the young fearless talent, and none of them are really playing today, it does surprise me in that sense.

“But what I will say he may be thinking [is] the impact they may have off the bench when it gets into the latter stages, so that could maybe be a ploy.”