Arsenal striker Pierre-Emerick Aubameyang believes the Gunners are capable of catching Chelsea and securing a place in next season’s Champions League. The Gunners are eight points behind Chelsea, who occupy fourth place in the Premier League table, but are rapidly improving under Mikel Arteta.

UEFA’s decision to slap a two-year ban on Manchester City means fifth place is likely to be enough for a spot in next season’s Champions League.

Manchester United currently occupy that place in the table – and they are only five points ahead while Arsenal have a game in hand.

Aubameyang is eager to play in the Champions League – and he thinks the Gunners can secure a spot in next season’s elite competition.

“I think it’s possible, everything is possible,” Aubameyang said. 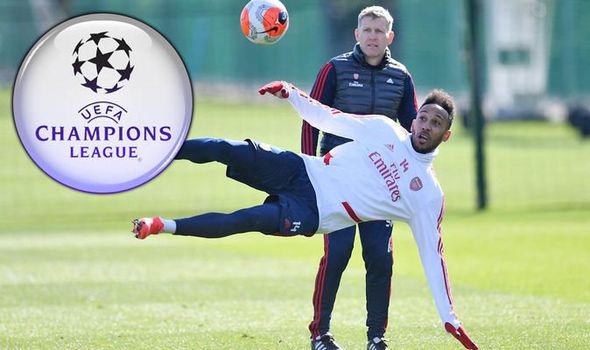 “Last season, we were ten points down from the top four and we came back at the end and were really close, but I think we can do it.

“When you see the games we have and what the other teams have, I think everything is possible. We have to be focused on what we’re doing and I think the team is doing well. We have some thing to improve, but I’m sure that now we have more pressure because we only have the chance to be in the Champions League because of the Premier League.

“That’s the way and we have to be focused on that and try to reach our goal.”

Aubameyang – the Premier League’s joint-top goalscorer with 17 goals – has yet to lift a trophy since arriving at the Emirates Stadium from Borussia Dortmund in January 2018.

Despite the lack of silverware, he does not believe his standing as one of the best striker’s in the game depends on the team’s success.

“I’m a striker so I will defend my side – I don’t think you need trophies to be a top striker,” he told Sky Sports.

“Of course, it can help you but we’ve seen a lot of great players that didn’t win trophies but we respect them because of their quality.

“You don’t need to win trophies but if you win it, it’s better.”