Atletico Madrid honed in on the La Liga title with a 2-1 win over Real Sociedad at the Wanda Metropolitano on Wednesday to move four points clear at the top of La Liga.

Diego Simeone’s side made an aggressive start and after spurning a few early chances they deservedly went ahead with a low finish from Yannick Carrasco in the 16th minute, doubling their lead 12 minutes later through Argentine forward Angel Correa.

Sociedad had their moments but were denied by six saves from Atletico’s talismanic keeper Jan Oblak while forward Portu hit the post late on.

They finally scored a goal when defender Igor Zubeldia bundled the ball into the net in the 83rd minute, ensuring a nerve-shredding finish for the leaders.

Atletico were hemmed into their own half for most of the remaining minutes but clung on for the victory and know they will lift a first La Liga crown since 2014 if they beat Osasuna and Real Valladolid in their final two fixtures.

Atletico lead the standings on 80 points, four clear of second-placed Barcelona and five ahead of Real Madrid in third, who visit Granada on Thursday. 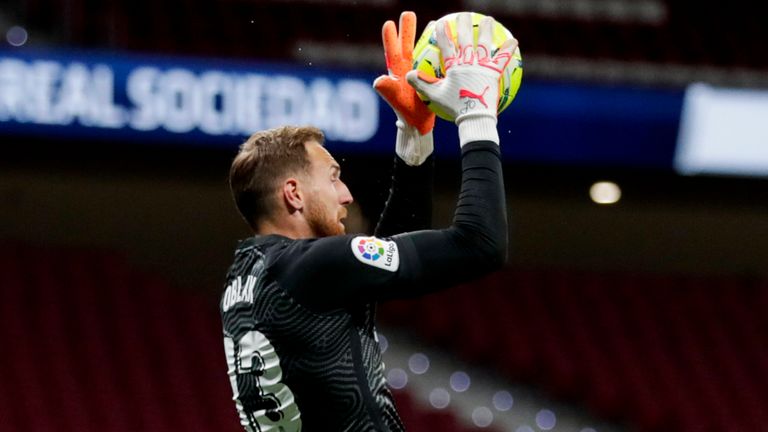 Elsewhere, fourth-placed Sevilla dropped out of title contention despite a 1-0 win against Valencia at home earlier on Wednesday.

Celta Vigo defeated Getafe 1-0 to stay in eighth place and maintain a shot at qualifying for the Europa League next season. Getafe remain in danger of relegation, sitting three points from the drop zone.

Huesca, meanwhile, moved out of the bottom three with a 1-0 win over Athletic Bilbao, staying two points clear of danger. 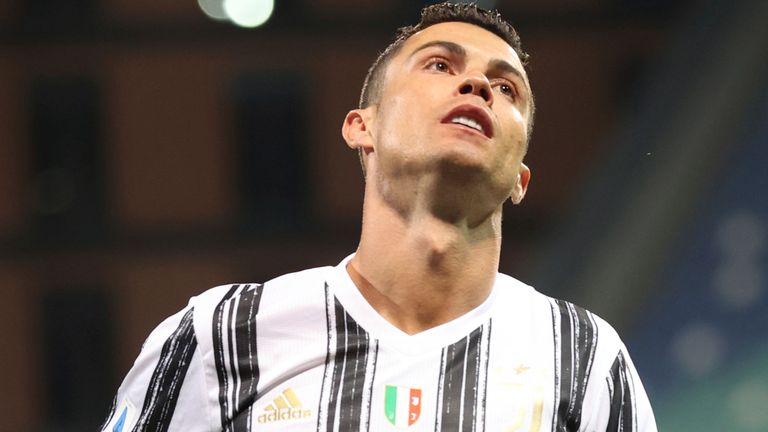 Cristiano Ronaldo’s 100th goal for Juventus in all competitions helped keep alive his side’s hopes of a top-four Serie A finish after a 3-1 win at an impressive Sassuolo.

The result was not easy to come by for Juve, with returning goalkeeper Gianluigi Buffon saving an early penalty, but goals from Adrien Rabiot, Ronaldo and Paulo Dybala meant they stayed fifth, two points off the Champions League qualification places.

Buffon, who announced this week that he is leaving the club at the end of the season, replaced Wojciech Szczesny in goal and immediately showed he has lost none of his ability as he brilliantly kept out Domenico Berardi’s spot-kick.

The chances kept coming for the home side, and their profligacy proved costly as Rabiot drilled home the opener in the 28th minute, before Ronaldo reached another milestone just before the break with a cool finish from the edge of the area. 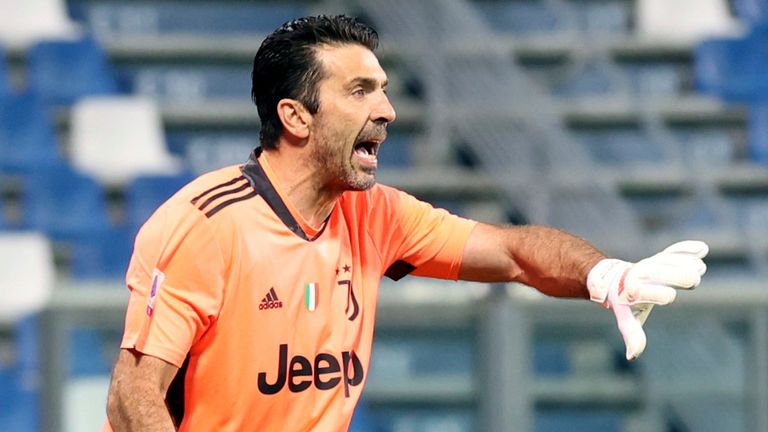 Sassuolo continued to do everything but score, until Giacomo Raspadori finally beat Buffon just before the hour mark.

But Dybala also reached a century of Juve goals, with a fine dinked finish, to ensure they kept pace with their top-four rivals Atalanta, AC Milan and Napoli, who all won in the latest round of matches, with two games to play.

A hat-trick from Ante Rebic helped AC Milan thrash struggling Torino 7-0 to move a step closer to securing a return to the Champions League next season.

Milan have not played in Europe’s premier competition since 2014, but a comprehensive victory in Turin kept them third in the standings, three points clear of Juventus in fifth.

Theo Hernandez scored early on with a thunderous strike, before Franck Kessie’s penalty gave Milan a two-goal lead at the interval. 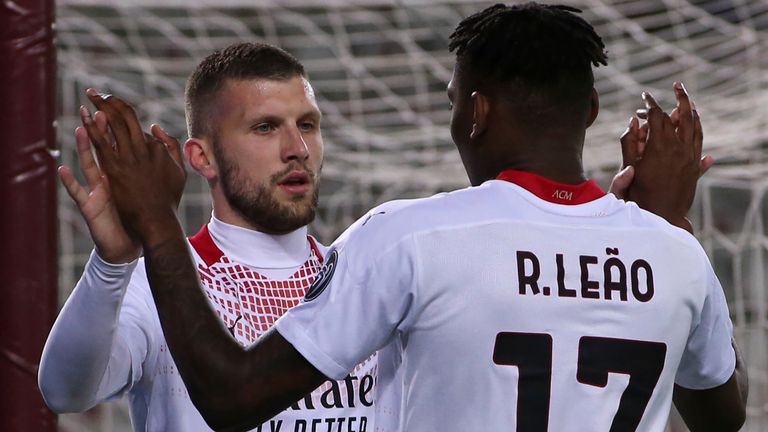 After the break, the floodgates opened as Brahim Diaz scored a fine goal before Rebic helped himself to his first in the 67th minute.

Two more followed from the Croatian forward to give Milan the most comfortable of wins in what was expected to be a difficult match with Torino fighting for survival down the other end of the table. They are four points above the relegation zone and have a game in hand on their rivals for the drop.

Champions Inter Milan stretched their unbeaten Serie A run to 20 games as they eased to a 3-1 victory over Roma.

Crowned Serie A winners for the first time in 11 years, Inter showed no sign of letting up as goals from Marcelo Brozovic, Matias Vecino and Romelu Lukaku preserved their 13-point lead at the top with two games to play.

Antonio Conte has resisted resting too many players as the season comes to a close, and a strong Inter side burst into a two-goal lead inside 20 minutes thanks to well-taken goals from Brozovic and Vecino.

Edin Dzeko set up Henrikh Mkhitaryan just after the half-hour mark to give Roma hope of a comeback, but Inter’s top scorer Lukaku made sure of a fourth successive win late on. 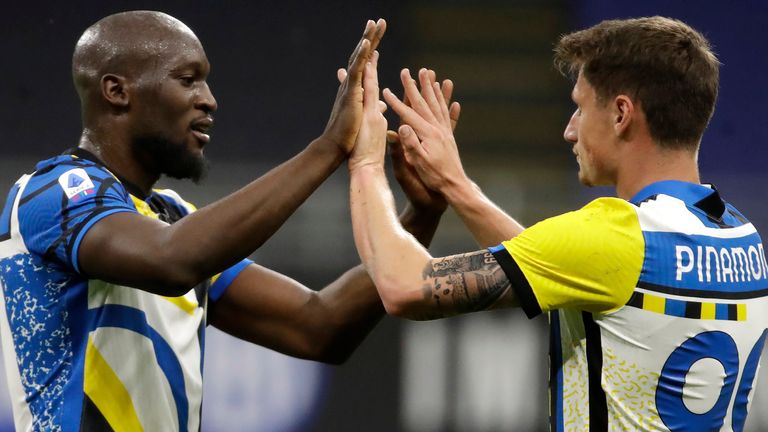 Inter moved on to 88 points – their biggest haul since 2007 – while Roma, who will be coached by Jose Mourinho next season, are now guaranteed to finish no higher than seventh.

Elsewhere, Atalanta cruised to a 2-0 win over Benevento, who remain deep in the relegation mire, to remain second.

Spezia earned a vital point in a 2-2 draw at Sampdoria to move four points clear of Benevento in 18th, while Cagliari’s fine end-of-season form continued as they held Fiorentina to a 0-0 stalemate to move five points clear of the drop zone.

Lazio left it very late to get the better of relegated Parma, with Ciro Immobile’s 95th-minute winner keeping them within touching distance of the top four on 67 points. Genoa also won 2-0 at Bologna. 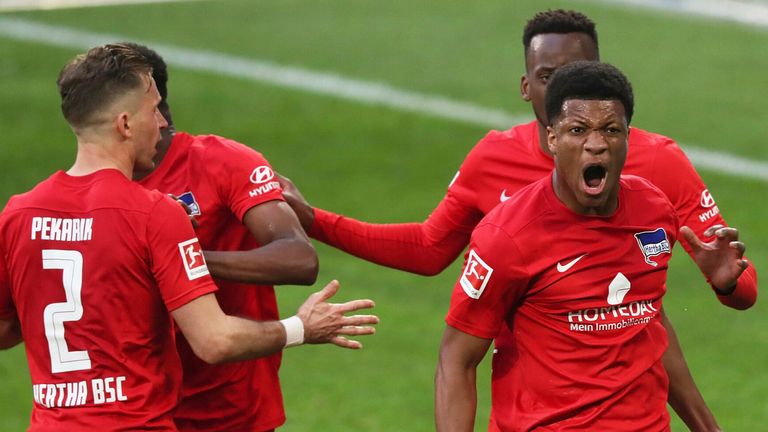 Substitute Jessic Ngankam scored what could prove to be a priceless winner for Hertha Berlin as the capital club took a big step towards maintaining their Bundesliga status with a 2-1 win at already-relegated Schalke.

Berlin fell behind in the sixth minute when home midfielder Amine Harit collected a pass from Sead Kolasinac and produced a fine finish, but were back on terms 13 minutes later after Dedryck Boyata met Marvin Plattenhardt’s free-kick with a powerful header.

Ngankam entered the fray in the second half and on 74 minutes, thumped home Nemanja Radonjic’s cut-back.

A second yellow card for Dodi Lukebakio saw Hertha reduced to ten men on 89 minutes and in a nervy conclusion both Shkodran Mustafi and Benito Raman struck the woodwork for Schalke, but Hertha held on to move five points clear of the automatic relegation places and three from the play-off spot with two games to play.