Watching Barcelona play is not the thrilling page-turner it once was … but the last page still reads the same way. Barcelona were below par but Lionel Messi scored and they won the game.

It was a stumbling, unconvincing 1-0 win at the Camp Nou and it was thanks to a dubious penalty scored by Messi. But it sends them top again until Real Madrid play on Sunday.

The ball struck Robin Le Normand’s upper arm in the area and after reviewing it pitch-side the referee Juan Martinez decided that it had been in an unnatural position and pointed to the spot. 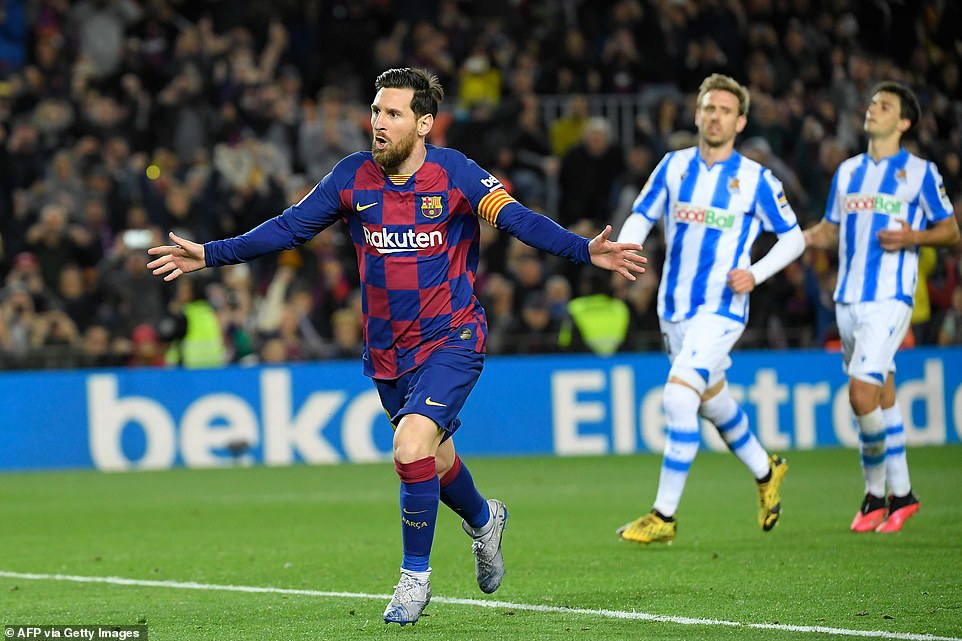 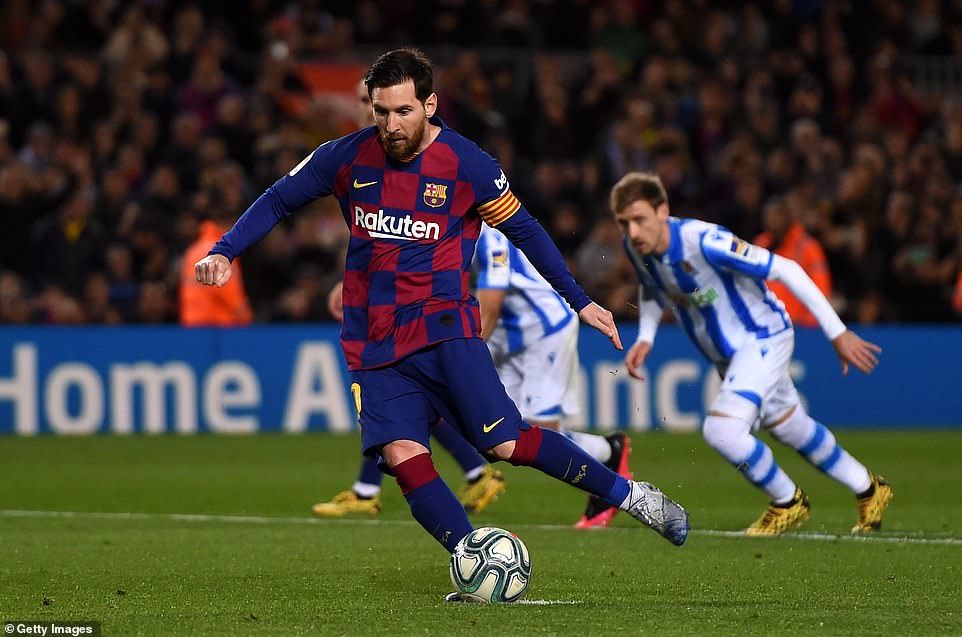 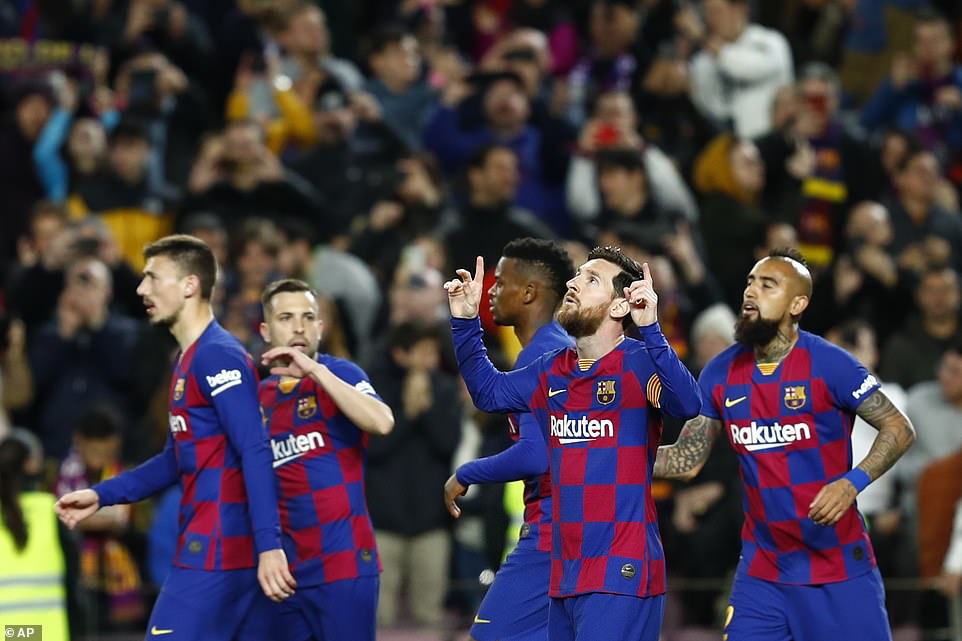 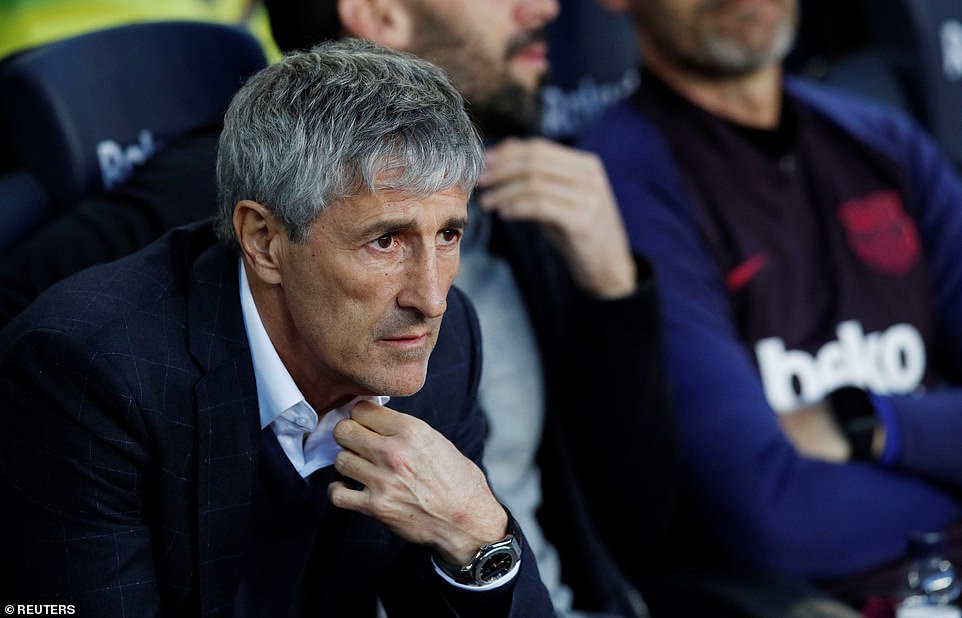 Messi stepped up to score his 19th goal of the season. He had been a long way from his best but once again he had been the difference.

He was booked in the first half – it was the third consecutive match in which he had picked up a yellow card; something that has never happened before in his career.

He also missed Barcelona’s best chance in the first half when Sergio Busquets put him through.

It was Messi who created the chance winning the ball on the touchline earlier in the move but on form you would have backed him to score once it had been played into him.

He also shinned a control in the area in the second half when running on to cross from Alba. Barcelona labored for the points and the game both started and ended with their supporters waving white handkerchiefs and calling for the president Josep Bartomeu to resign.

There were also whistles for the team. Jordi Alba complained after the game: ‘No one likes to be whistled and even less so in minute 15 with the score at 0-0. I respect everyone but they need to respect me.’ 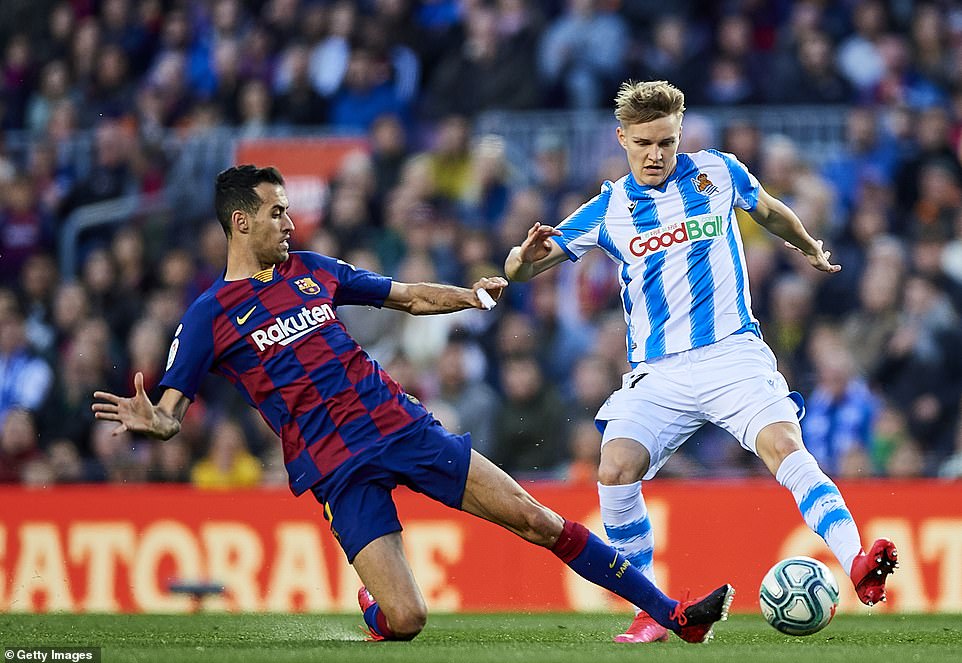 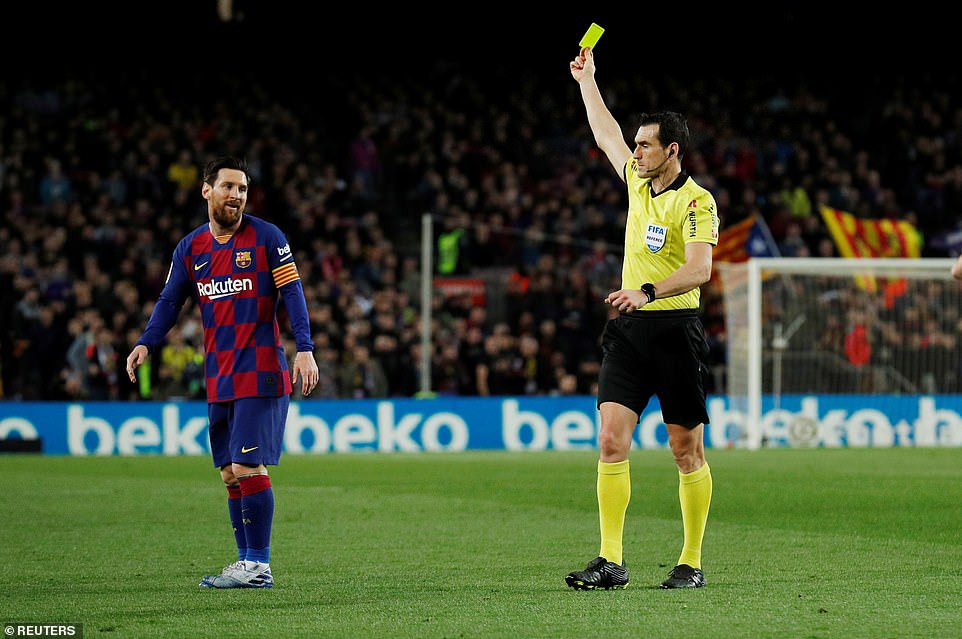 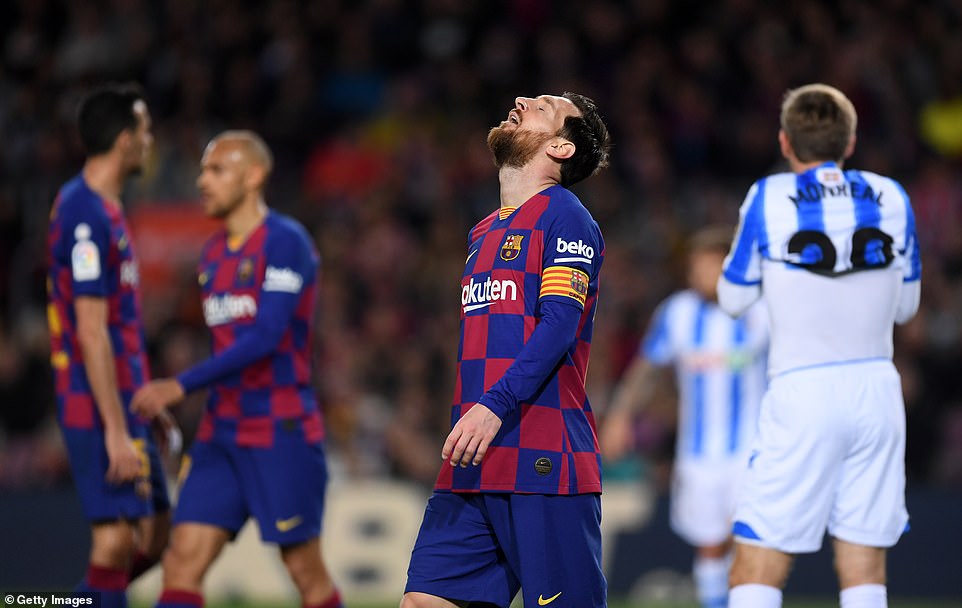 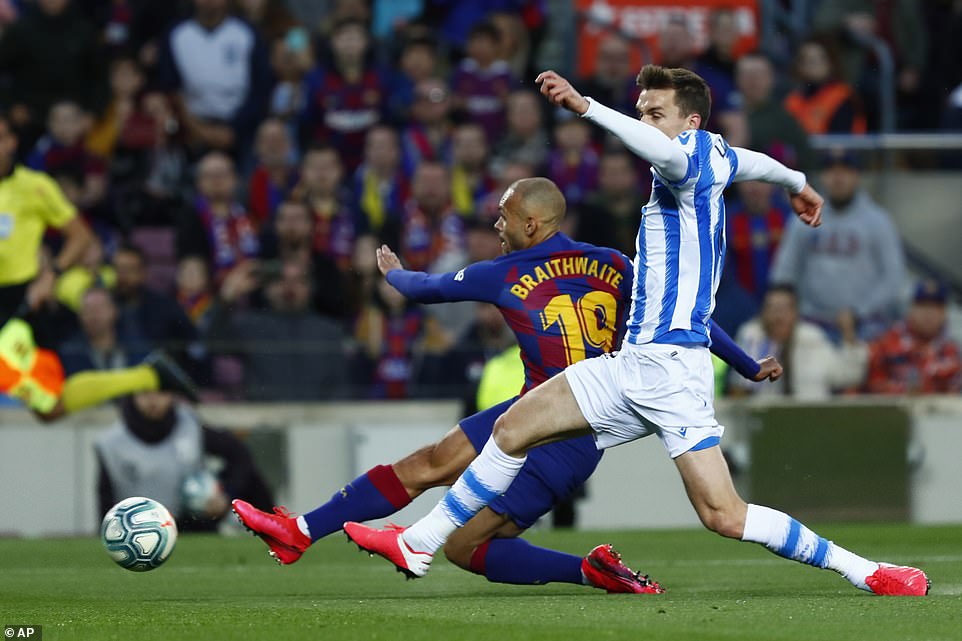 Real Sociedad are having their best season for 30 years. They reached the Spanish Cup final last week for the first time since 1988. They have not won at the Camp Nou since 1991 but this felt like a good opportunity to end that run.

Young striker Alexsander Isak had their best chance just before Barcelona’s penalty but he blazed over. Alex Remiro also had to save well from Ivan Rakitic.

They paid for not taking their chance when the penalty went against them and Messi dispatched. He came into the game on a run of having failed to score in six of his last seven games. His caution came for a wild challenge on Mikel Merino – a clear sign of his frustration at the way the team are playing.

He was not the only player below par. Playing against his old club Antoine Griezmann was taken off in the second half and cut a forlorn figure as he walked around the perimeter back to the dug-out.

In contrast Martin Braithwaite started his first game for Barcelona and was bright throughout linking well with Messi in the first 45 minutes and sending two shots just wide. 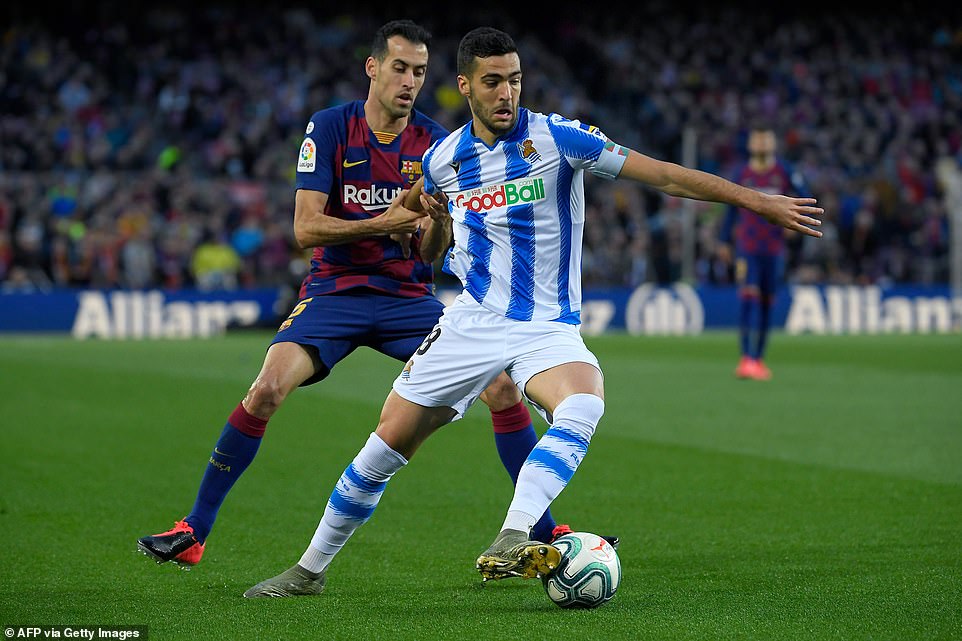 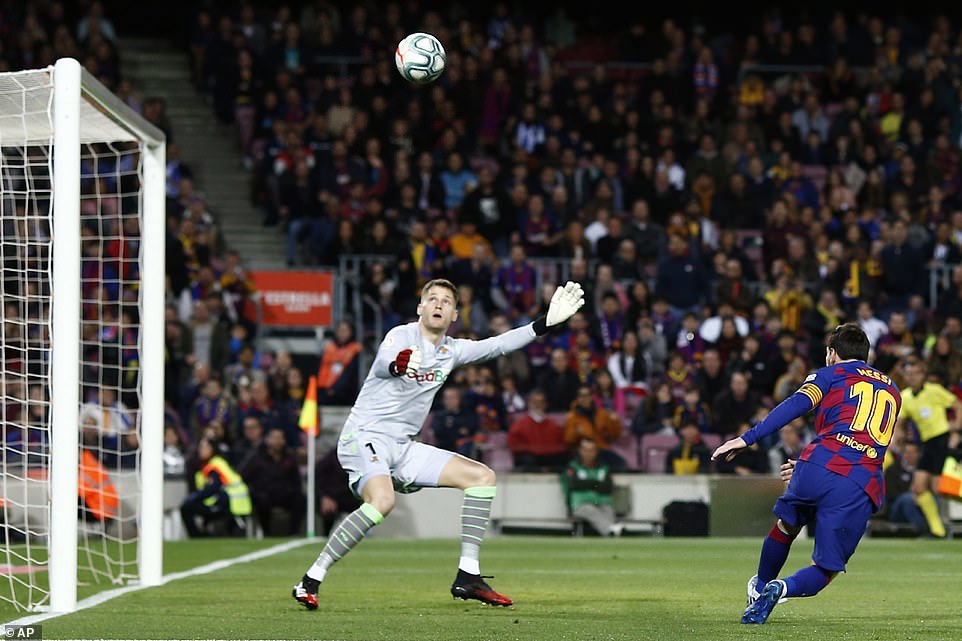 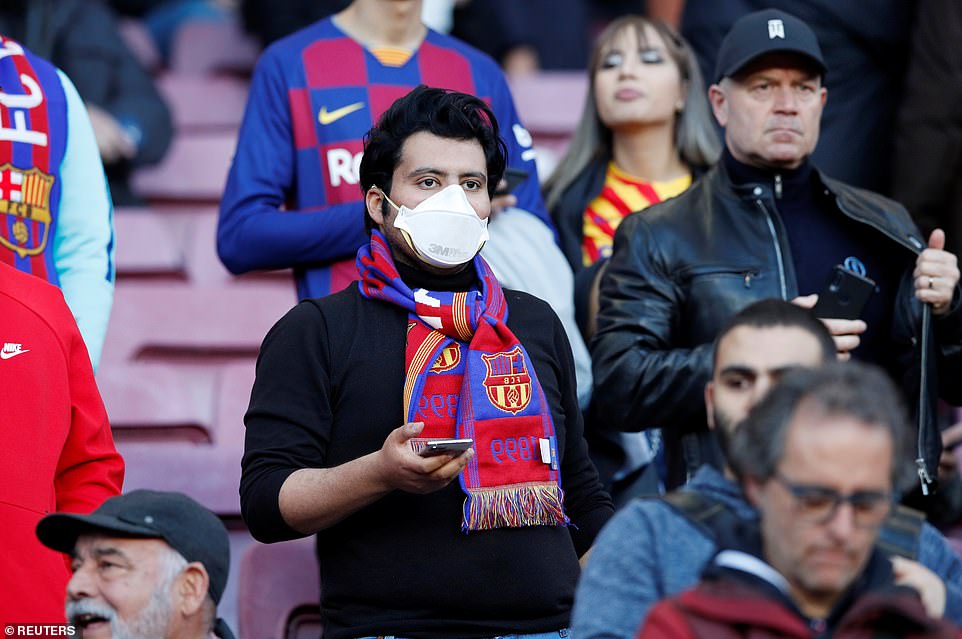 Gerard Pique was asked after the game about stories that the players had been upset with the behavior of second coach Eder Sarabia during the Clasico when he had criticized the players from the dug-out.

‘It’s normal,’ he said. ‘And it’s not true that we were bothered by it. We want the coaches to be intense. He apologized to us but we told him that it was not us asking for the apology. Maybe it was for the image of the club.’

The image of the club is suffering more than anything because the fizz has gone out of the football. But Messi is still top scorer and the team are, for Saturday night at least, top of the pile.