Borussia Monchengladbach have filled their Borussia-Park home ground with 13,000 cardboard cut-out fans for their Bundesliga match against Bayer Leverkusen. Football in Germany restarted last week but safety measures are still in place with all fixtures taking place behind closed doors.

This temporary rule has led to empty seats and lack of atmosphere which inspire a rather sombre tone no matter how competitive each game gets.

But Gladbach found an interesting way to improve this difficult situation by filling their stadium with cardboard frames of fans to at least remove the sad image of empty seats.

The German club are playing their first home game since the league was restarted following a 3-1 victory at Eintracht Frankfurt last week. 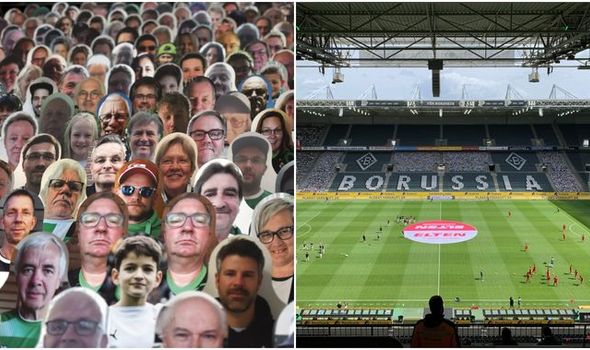 And the Bundesliga outfit found an interesting way to make their own fans make their presence felt in some way to lift up the players’ spirits.

Supporters saw their face put onto a life-sized cardboard cut-out for only €19 (£17) per person and all the proceeds were donated to a local charity amid the coronavirus pandemic. 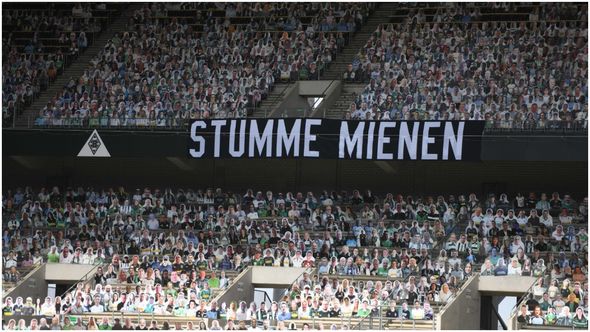 Gladbach sporting director Max Eberl said: “The cardboard cutouts are a monument. They’re supposed to show that football without fans just isn’t the same. It’s a great campaign which provides a lot of atmosphere in the stadium.”

The Bundesliga is the first major football competition to restart as the German government was satisfied by the proposed safety measures after infection rates went down.

Chancellor Angela Merkel agreed to allow first and second-division clubs to return to action so that the season can be completed.

The German government released the following statement: “The Federal Chancellor and the heads of government of the federal states consider the continuation of play in the 1st and 2nd Bundesliga to be justifiable for the 36 clubs eligible to start there at their expense from the second half of May.

The Ligue 1, Eredivisie and Scottish Premiership are among some of the leagues that have been abandoned due to COVID-19.

The Premier League has been halted ever since March 13 and officials are determined to get the campaign back up and running by June 12.

If the league resumes then it is highly likely that all remaining fixtures will also be carried out behind closed doors and that could also continue until next year depending on how well the virus is contained.