Brondby 1-1 Rangers: Super sub Ianis Hagi strikes late to rescue a Europa League point for Steven Gerrard’s stuttering side after Leon Balogun had headed in an own goal

Steven Gerrard’s Rangers battled back to secure a scruffy, scrappy but potentially valuable point against Brondby in Denmark – despite surrendering yet another lead in this season of defensive disasters.

A Leon Balogun own goal on the stroke of half-time saw Rangers concede first for the ninth time in the current campaign.

But substitute Ianis Hagi equalised with less than a quarter of an hour remaining, finishing off a flowing move that ultimately kept Rangers clear of the Danish middleweights in Group A – and silenced the raucous home crowd. 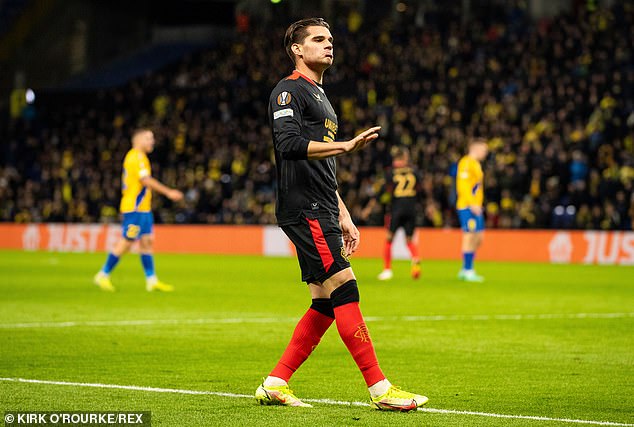 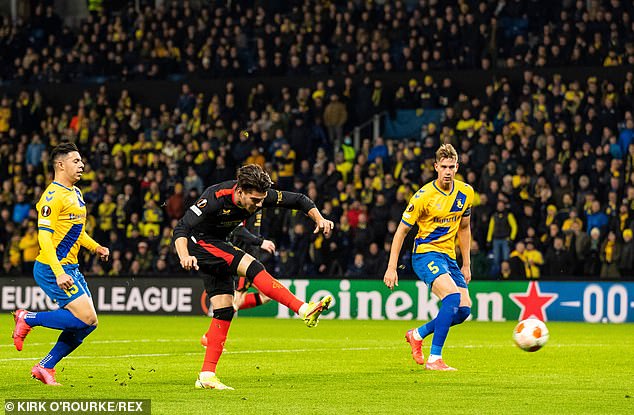 Plenty had been said about the intensity of atmosphere at the Brondby Stadium, with everyone from Sportsmail’s own Brian Laudrup to Gerrard’s former Liverpool team-mate Daniel Agger warning Rangers to expect something approaching bedlam in this picturesque little suburb of Copenhagen.

And fair play to the seething, bouncing, chanting mass of yellow-shirted loons gathered behind the home goal from a good 90 minutes before kick-off. They didn’t lack for enthusiasm – or volume.

Singing to the beat of their own drummers, with a mic’d up cantor leading the choir, they were louder than a crowd of this size had any right to be.

It hardly seem to matter what was happening on the park. Beyond whistling and jeering Rangers from the moment their players took the knee before kick-off, events in the game itself had little impact on the decibels.

As Gerrard noted before kick-off here, however, atmospheres don’t win you games.

That would be down to a Brondby team who, heading into last night’s round of fixtures, were the only side yet to score a goal in the Europa League group stages. 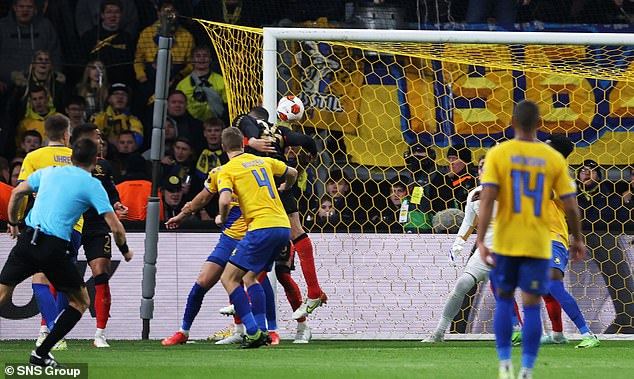 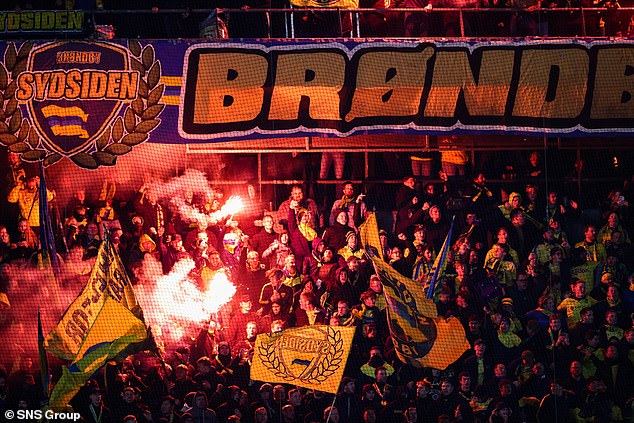 Clearly, it was going to take something out of the ordinary for them to break their duck here tonight …

Rangers, by contrast, arrived feeling confident after banging in six goals against Motherwell at the weekend, with Gerrard eager to build on that display.

Fresh from his hat-trick at Fir Park, the irrepressible Fashion Sakala kept his place in a front three also boasting the proven European pedigree of Alfredo Morelos – and the trickery of Joe Aribo.

Morelos was booked for an early foul, a sign of just how intensely Rangers were pressing in the opening stages, with the men in black giving their hosts no time to settle on the ball.

That pressure looked to have paid off when they had the ball in the net after just five minutes, Morelos powering a header beyond Mads Hermansen in the home goal.

But the linesman raised his flag to signal that James Tavernier’s corner kick had drifted out of play before arriving in the box and, after a brief VAR check, the score stayed at nil-nil. 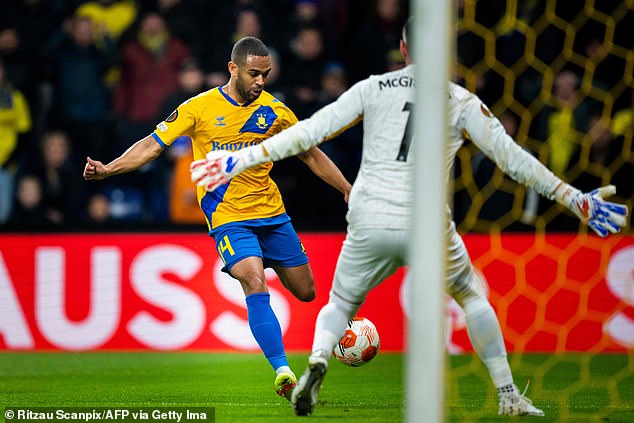 Rangers were energised by coming so close to an early breakthrough, Sakala pulling a right-footed shot wide soon afterwards, thanks to smart build-up play involving both Steve Davis and Aribo.

Morelos shot wide, Aribo headed over and Conor Goldson saw a powerful header from a Borna Barisic corner cleared during a first half low on both quality and incident.

Brondby? Well, Simon Hedlund had a shot deflected for a corner and Josip Radosevic really should have hit the target – he was closer to smashing a floodlight – after a decent bit of build-up down the right.

Overall, though, they looked like a team short of quality in the final third. A side who almost threatened. A group of players in need of a break.

They certainly got that with just seconds to go in the first half, as an in-swinging corner from the left was flicked on at the front post by Christian Cappis.

The ball landed squarely on the head of Balogun who, for reasons known only himself, was facing his own goal. Allan McGregor had no chance. 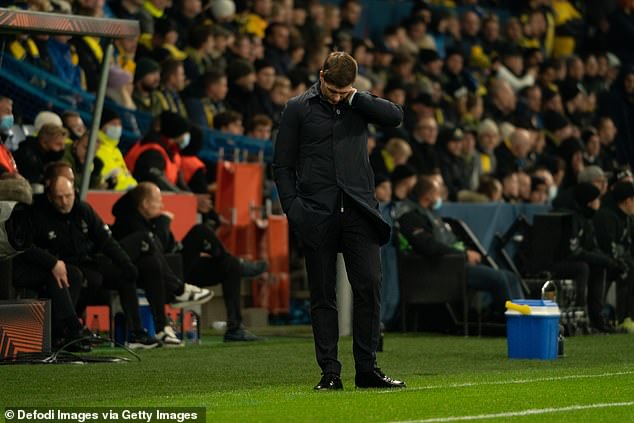 Despite the late equaliser, boss Steven Gerrard will be disappointed with only getting a draw

Gerrard has been given plenty of cause to bemoan his team’s inability to keep a clean sheet this season.

As he rallied his troops at half-time, though, he clearly hoped that their resilience – they’ve come back from 1-0 down to win on four occasions already during this campaign – would shine through once more.

McGregor had to look sharp to prevent Kevin Tshiembe from doubling the home side’s lead early in the second half, however, the former Scotland No. 1 pulling off a fine save at point-blank range.

Frustrated, infuriated and possibly dumbfounded by what he was seeing, Gerrard didn’t take long to ring the changes.

With 55 minutes on the clock, he made three substitutions. It could have been eight or nine, had the rules permitted such wholesale changes.

Off came Scott Arfield, Morelos and Sakala, with Kemar Roofe, Ryan Kent – making his first appearance since limping off with a hamstring injury in September’s 2-0 home loss to Lyon – and Hagi thrown into the fray. 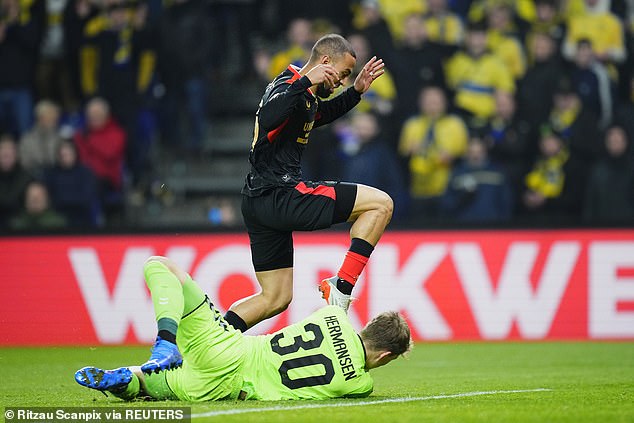 And he was involved in the equaliser, driving at the Brondby defence before slipping a pass through for Hagi, who showed real composure to send a low, right-fitted drive beyond the despairing Hermansen.

Hagi clearly enjoyed the moment, making a gesture to show how much he was savouring the local glee club being quietened. For just a few moments.

The Brondby fans recovered their voices quickly enough. The same couldn’t be said about the game, which rather limped towards a tame conclusion.

Nobody tuning in would have mistaken this for a Champions League clash. In truth, it probably struggled to reach Europa Conference League levels.

But the draw gives Gerrard and his men the chance of progressing in the Europa League, still. No little consolation, on a night with little to recommend itself to the affections of the 1400 or so travelling Rangers supporters.