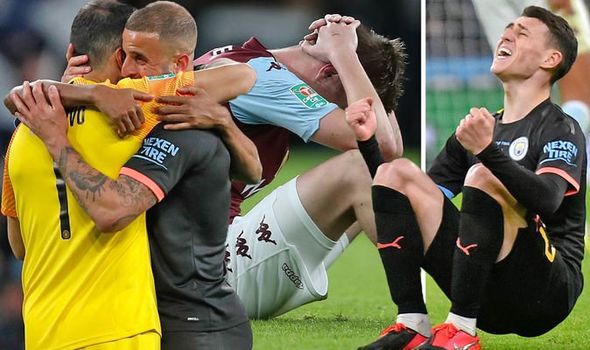 Dean Smith revealed before kick-off that HRH Duke of Cambridge came into the Aston Villa dressing room to give what he described as “a little pep talk”. The Big Pep talk was delivered in the other changing area as once again the Manchester City manager got his game plan right on the big occasion.

Both the goalscorers in City’s midweek Champions League win over Real Madrid were dropped to the bench but the decision to keep faith with Phil Foden in the Carabao Cup even into the final itself paid dividends.

Jack Grealish failed to inspire a shock Aston Villa win, while Foden played some of City’s best football as they ensured they got their hands on the trophy for the third season in a row.

It was only yet another horrendous error by City defender John Stones that stopped Pep Guardiola’s men putting this game to bed long before half-time.

Express Sport have run the rule over Villa and City’s players after the Carabao Cup final – but do you agree with our ratings?

Inexperienced goalkeeper who could perhaps have done better with first goal.

Had the tough task of keeping Sterling quiet which he just about achieved.

Hopelessly out-jumped by Rodri for the second City goal. Needed to do better.

Did everything he could to get his body in the way of whatever City threw at them.

Useful from set pieces but it tended to be his flank that City found easiest to exploit.

Got the orangest of yellow cards for huge foul on Aguero. Frustrated by chasing shadows.

This was a big game for him but he was restricted to a few half-promising moments.

Seemed determined to pounce on any sign of a City mistake and set up goal brilliantly.

Wow! He certainly meant that header which nearly burst the Wembley net. Powerful.

No chance with the goal and otherwise a relatively quiet afternoon.

Worked well with Foden coming forward and firmly in control of things at the back.

Even standing up seems beyond him right now. His slip for the Villa goal was a calamity.

Calm presence as ever playing within himself in that centre-back role. Composed.

When he was purring away, City ticked along nicely. And that was most of the time.

Always a threat when he got on the ball without causing any direct damage as such.

Played his usual role of re-angling the City attack to keep Villa on their toes. Tidy as ever.

Got lucky with the corner decision ahead of second goal but made most of it with delivery.

Created the first goal and some of his touches absolutely lit up Wembley. Sublime.

Of course he scored. He always does. Consistently City’s most undervalued hero.