For Ange Postecoglou the January break offered the opportunity to answer a troubling question. How could Celtic win games – let alone a league title – without the goals of Kyogo Furuhashi?

The scorer of 16 goals before Christmas, the Japanese international’s hamstring problems retain the potential to curtail his involvement for some time. By adding reinforcements from the Land of the Rising Sun Celtic’s coach offered hope last night that it doesn’t have to be the end of the world.

After a three week lay-off fans flocked back to Parkhead to witness the coronation of some new Japanese Emperors. Daizen Maeda, the striker signed from Yokohama F Marinos, marked his first start with his first goal after four minutes. Reo Hatate, meanwhile, looks a huge midfield talent. If this is what you get shopping in the J-League sales in January, it might be times for others to load up their trolley. 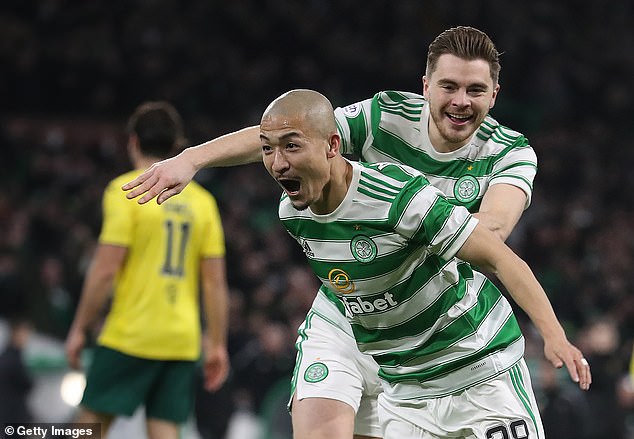 Inflicting the first defeat on Hibs boss Shaun Maloney, Celtic are now edging close to a calendar year since they lost at home to St Mirren in January 2021. It’s early days. Yet the difference between the laboured side of empty grounds and empty jerseys and the high tempo football of last night already looks night and day.

Seeking a sixth straight home win Celtic secured a dream start through debutant Maeda after four minutes. A simple composed finish from a Tom Rogic pass was the 5000th goal of the SPFL Premiership era and came moments after Hibs blew a glorious chance to take the lead and silence a home support brimming with anticipation after a covid-enforced absence.

Kevin Nisbet is still wondering how he missed. And he’s not alone in that. Exorcising his frustration at the denial of a life-changing move to Saudi Arabia, Hibs winger Martin Boyle burst forward at pace, feeding Chris Cadden on the right side. Granted a foraging role in a 3-5-2 formation, the wing-back played a perfectly weighted cross, a diving Joe Hart missing it completely. Scotland international Nisbet only had to sidefoot it into an open goal, contriving to hit the far post instead.

An astonishing blunder Celtic took ruthless advantage. There were times last season when the ponderous nature of the build-up play drove supporters to distraction. From the moment Maeda marked the start of his Parkhead career with a composed finish from 12 yards Celtic were a tour de force. The tempo and aggression of their play was something to behold.

Unbeaten in nine games since losing to Bayer Leverkusen in the Europa League the perfect ten was a thrilling affair at times. While Maeda will capture the headlines by virtue of his goal, there was another highly promising debut from Reo Hatate. 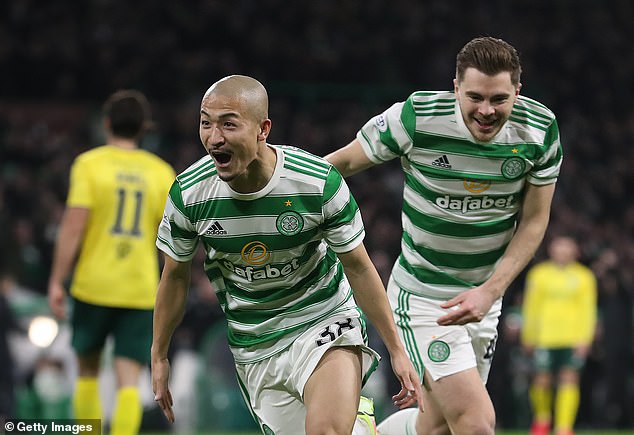 When a footballer is billed as a utility man it can mean a number of things. If Hatate is as accomplished in other positions as he was in midfield here then Celtic have quite the player on their hands. His range of passing and composure on the ball had supporters off their seats at times.

Hibernian had a debutant of their own in central defender Rocky Bushiri. With Ryan Porteous suspended the Norwich loan signing was pitched in at the deep end. He can take solace from the knowledge that not all games in the Scottish Premiership will be like this.

Hibs felt an air of injustice with Celtic’s second goal after 25 minutes. On a day when a survey showed that Rangers win more spot kicks in Scotland’s top tier than any other team the Parkhead side narrowed the gap slightly when Josh Doig – pitched into a back three – was penalised for handling a Liel Abada flick after flowing attacking move.

Protests to referee Willie Collum in vein, Josip Juranovic maintained his 100% record from 12 yards when he sent Matt Macey the wrong way. Three down after half an hour when the sides met at Easter Road earlier in the season, the Edinburgh side were up against it once again.

With a two goal lead Celtic looked liable to add more at any time. Their football, at times, was irresistble, their pressing a constant menace to their opponents.

Maeda was a case in point after 36 minutes, chasing down a lost cause to tee up countryman Hatate to control the ball on his chest and thump a half volley at goal. Macey produced a fine parry to keep Hibs in the game at half-time.

Shaun Maloney had been in this movie often enough in a Celtic shirt to recognise the size of the task.

Maloney scored 52 goals in 215 appearances over two stints at Parkhead and Hibs needed some of his guile and intelligence to find some kind of foothold back in the game. In truth, their away record didn’t inspire much confidence 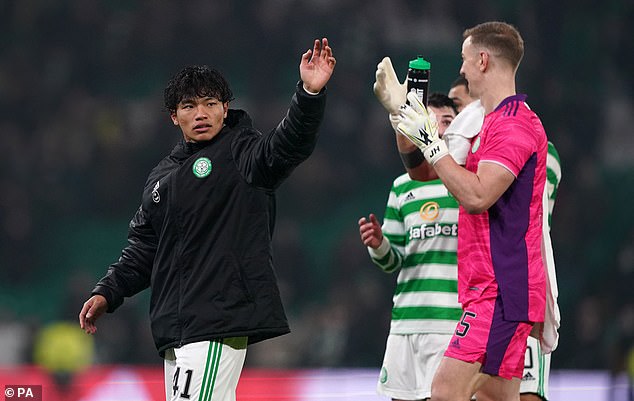 Despite winning the new manager’s first game in charge at Aberdeen Hibees had won only three times on their travels in 11 games. In introduction of winger Jamie Murphy for Josh Campbell after 58 minutes was the acknowledgment of a stark truth. With the game slipping away they had very little left to lose.

The former Rangers man arrived moments after the Parkhead side an excellent chance for 3-0.

Carl Starfelt met a corner kick with a flashing header towards the back post. Liel Abada slid in and slammed a shot against the upright from point blank range, the ball almost caught between the Israeli and the upright before going wide.

A vote by Premiership clubs to bring back five substitutions was approved in midweek and witnessed a flurry of late changes. Ange Postecoglou made three in one go, handing Yosuke Ideguchi his first appearance as a replacement a tiring Hatate while Giorgos Giokoumakis made his return from knee surgery to replace the opening goalscorer Maeda.

The ovation of the night came with nine minutes to play when Portuguese winger Jota marked his own return from a hamstring ailment. All in all, then, not the worst of nights for Celtic. 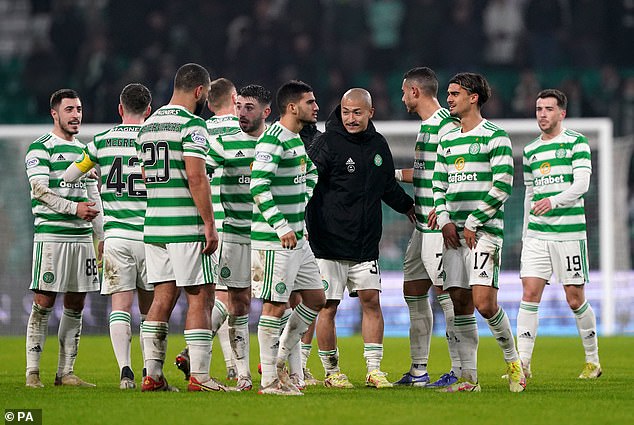 Hoops closed the gap on table topping Rangers to three points, having played a game more