Things had not begun well for Brisbane Roar when Queensland Government Covid strictures forced them to seek a travel exemption and only fly to Melbourne for their opening day clash with champions Melbourne City on Friday, the day of the game.

So coach Warren Moon knew he had to adapt his tactics and play the percentages. And when you surrender possession, defend in depth, and back yourself to hit on the break, everything has to go right. 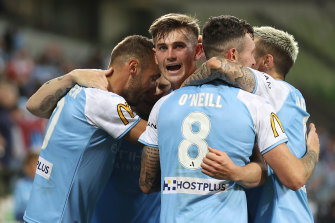 But their luck ran out five minutes before the interval when Curtis Good gave the hosts the lead as he reacted quickest when Roar goalkeeper Macklin Freke palmed away Jamie Maclaren’s volley from a Connor Metcalfe cross, the centre back lashing home from close to goal.

And once this City side get a sniff of victory, it takes a good team, with a different approach – and some good fortune of their own – to turn things around.

And that, for the most part, seemed to be that, as City began the second half as they had the first, looking calm and in control. 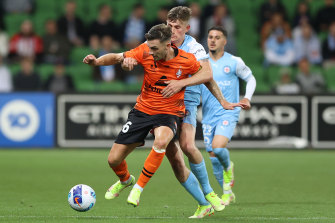 But then Luke Ivanovic, on his A-League debut, headed home from a Jay O’Shea cross to make it 2-1 with 20 minutes remaining to give the visitors hope of what had seemed an unlikely point.

To their credit Brisbane continued to press forward and when Kai Trewin headed home from an O’Shea cross he appeared to have done just that – only for the goal to be ruled out for offside.

While City did enough to take this game, the Roar upped the ante in the second period and showed enough adventure to give them hope that when their Argentinian signing Juan Lescano regains fitness they could provide more of a goal threat.

So what did we learn from this, City’s first game as defending champions?

Well, we can expect more of the possession-based style that saw them climb the mountain for the first time last season, although coach Patrick Kisnorbo will be anxious to avoid any repetition of the late game fadeout which almost cost his side all three points here.

We also got another reminder of the strength in depth Kisnorbo has at his disposal.

Nathaniel Atkinson was Joe Marston medallist, judged to be the best on ground in last year’s grand final, but he couldn’t get a spot in the starting line up. Scott Galloway was preferred at right back, with Andrew Nabbout deployed further forward on the same flank.

Marco Tillio and Stefan Colakovski, two other bright young talents who had caught the eye in the title decider, were also on the pine, like Atkinson having to wait their turn.

City will get better – but they will need to if they are to achieve their aim of successive championships.

For Moon it was a question of what might have been as he confessed to having been “gobsmacked” by the requirement to travel on the day.

“We are disappointed. We knew the challenges we faced coming here especially with the travel arrangements the Queensland government and APL (Australian Professional Leagues) put in place for us.

“It was so disappointing to go in half time with two set pieces where we allowed them the opportunities to score from set pieces.

“We are going to have to be resilient and find a way. The decision (on travel) was made. In any elite environment that doesn’t get thrown on you. Despite all that we were the stronger team to finish the game.

Kisnorbo admitted his side were not at their best – “we need a lot of improvement” – but he was pleased that they could grind out a result.