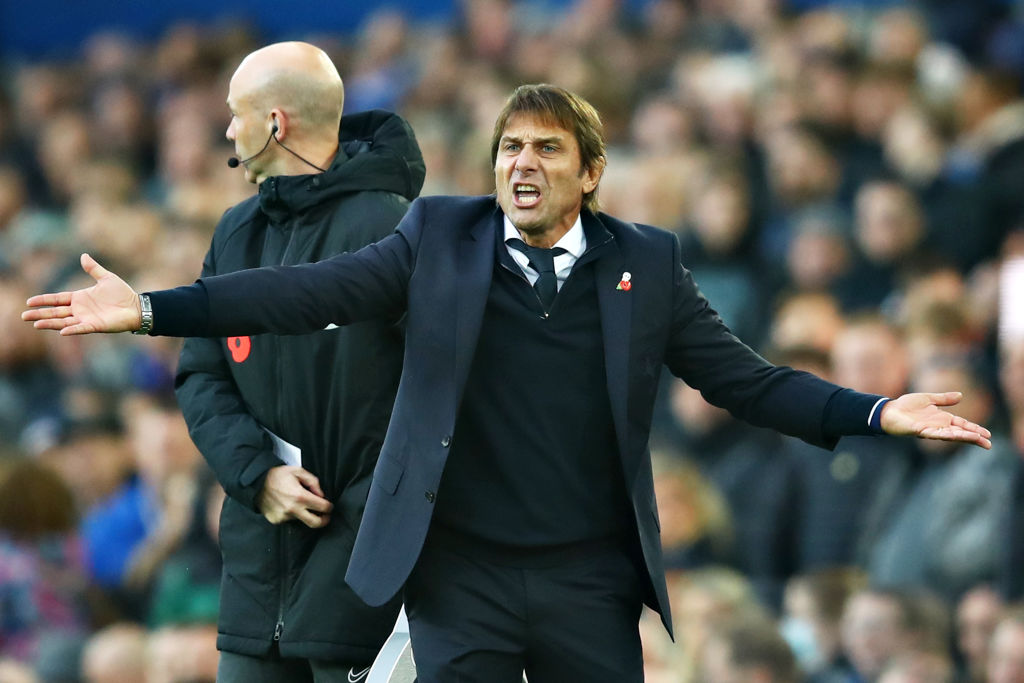 Antonio Conte said he was ‘delighted’ with Tottenham’s performance after the side’s goalless draw with Everton, but warned his players it was ‘only our start’ and ‘hardwork is the only medicine’ going forward.

The Italian had just three days to work with his Spurs squad for his opening match back in the Premier League after replacing Nuno Espirito Santo in the hot seat and had to settle for a point in a hard-fought clash at Goodison Park.

Giovani Lo Celso came closest for the visitors with a superb curled effort at the death, but the Argentine had his head in his hands as he was denied by the post.

The result meant Tottenham remain stuck in ninth place in the table, with the north London outfit failing to win any of their last three matches in the English top flight.

And though Spurs failed to register a single shot on target, Conte was upbeat about the display while speaking with beIN SPORTS shortly after the final whistle on Merseyside.

‘Today I must be delighted because it wasn’t easy. Goodison Park for the team that has to play against Everton is never a good place. There is a fantastic atmosphere, the fans push a lot during the game,’ Conte said.

‘But I’m happy, I’m happy we started here in this way because I have seen some tactical situations that we’ve tried in these three days. I have seen the spirit of my team.

‘At the moment that we suffered the team showed me that they want to suffer, they want to learn more, not only on the tactical aspect but also the spirit.

‘We must be strong in every moment then you can lose and you can win, but you must stay on the pitch with your head and with your heart, with your patience.

‘It’s only our start and now we have to work. I’m not afraid about these words, but for sure hard work is the only medicine for us.’

Conte bemoaned the ‘mistakes’ Tottenham made in the final third, but felt his players should be pleased with their showing away from home.

‘We created the chances to score. But we made many mistakes in the final pass to make the best decision. We made many, many mistakes to take the decision to pass the ball and go to score,’ the ex-Chelsea manager added.

‘I think we can improve. Don’t forget this same team played on Thursday and to play again after only 48 hours is not simple.

‘To start in this way at Goodison Park is not simple, but we did it and I’m happy.’

Several members of Tottenham’s squad were put through their paces during an intensive warm-down session which went on for some time after the final whistle at Goodison Park.

Asked whether improving the fitness of his team was key, Conte replied: ‘It depends on the football you want to play.

‘If you want to play intensive football it means that you have to bring intensity for the whole game and instead against Vitesse after 35 minutes we went a bit down, physically. Also today we suffered a bit in the second half.

‘But we need to exploit every second of our life at Tottenham to try to improve the players and their physical aspects and their tactical aspects.

‘Only because the demands of my football are very high and you must stay good physically if you want to play with high intensity.

‘We want to maintain this intensity for the whole game and for this reason we need to work hard.’