CRAIG HOPE: He inherited a defensive wall and left a pile of bricks – Steve Bruce’s Newcastle were joyless, with fans wound up by his words and media allies while players felt he played the blame game

Steve Bruce is a survivor. He survives until he survives no more. He gets by, doing what he must to keep the wolf from the door. If the wolf could nick the odd goal to deflect from other shortcomings, he would invite him in.

The problem with that, as Newcastle United have found during a joyless 27 months, is that it rendered progress impossible.

Players rarely improved for coaching and the development of an identifiable style was as likely as Bruce accepting responsibility for bad results. He said he did, but he didn’t, really. 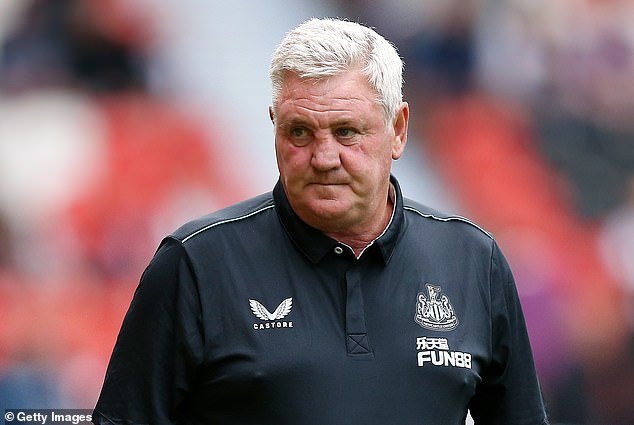 Just look at the fallout when he publicly blamed substitute Matt Ritchie for not passing on his instructions – in an empty stadium – before conceding an equaliser at home to Wolves last season. It led to Bruce physically confronting Ritchie after the player called him a coward. The bulk of the squad, however, sided with their team-mate.

When Rafa Benitez quit in 2019, a well-drilled and expertly-coached team remained. Bruce felt they were brainwashed and, over time, he trashed his legacy, inheriting a defensive wall and leaving behind a pile of bricks.

Unlike Benitez, Bruce did manage the hierarchy well, and the situation he walked into, on the eve of a new season, was not an easy one. The club duly backed him with £160million spent on new players, debunking the myth of this being an impossible task.

But there is another falsity – perpetuated by allies of Bruce – that he was harshly treated on Tyneside, that criticism was inevitable because of previous links with Sunderland. 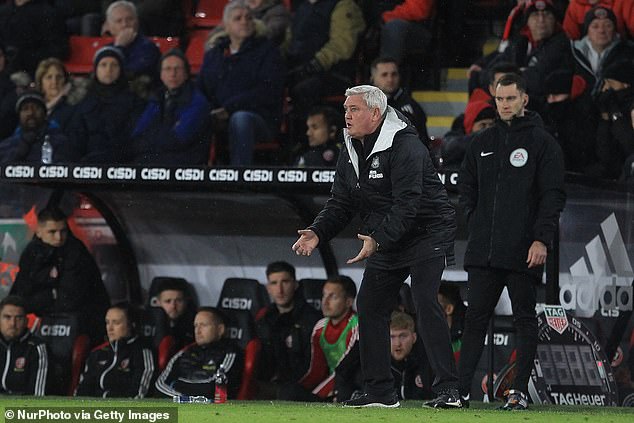 When Rafa Benitez quit in 2019, a well-drilled team remained but Bruce picked it apart

That is nonsense. He was judged entirely within the confines of the job he did at Newcastle. If he had done it better and handled himself with less aggravation, he would have won praise, no doubt. But seven wins from the last 38 games, two of those against already-relegated sides, was inescapably grounds to be sacked.

The propaganda on the outside – widespread and powerful from friends within the media – did him no favours, hardening the resolve of supporters to expose the gradual decline of their team. It was tiresome to listen to opinions that just did not tally with reality.

Bruce, too, was his own worst enemy, antagonising supporters and alienating players with contradictory words of little substance. For all those who say he is a ‘good bloke’ – and away from this environment he must be, given the breadth of warmth towards him – that side did not show itself at Newcastle.

The warning signs were there in his first away game at Norwich, a 3-1 defeat. Afterwards, he said he could not question the desire of his team. Seconds later, in a corridor with reporters, he was accusing them of ‘not even putting their boots on’. 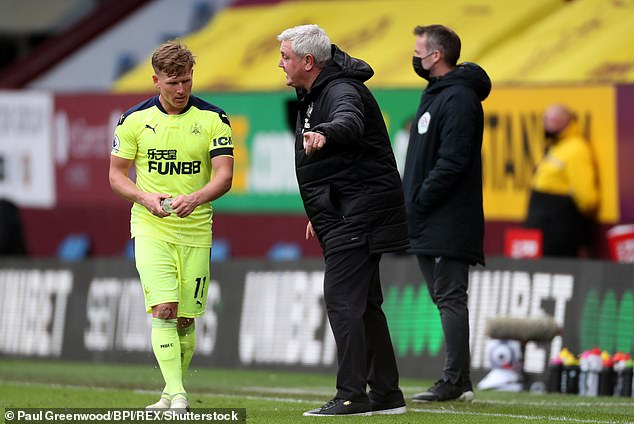 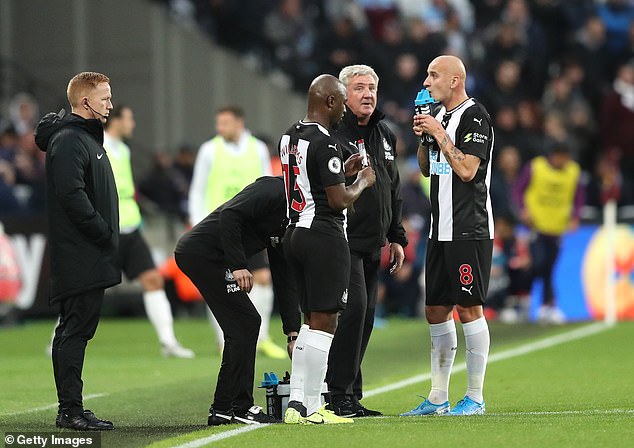 In a loss to Arsenal in his first match, Bruce put Jetro Willems (centre) on in the wrong position

During a 1-0 defeat by Arsenal in his opening match, Bruce sent on substitute Jetro Willems in the wrong position. He soon changed it but, amid the confusion, Arsenal scored. He later said his defenders should have done more to prevent the goal and blamed rainwater permeating the numbers board for delaying a second substitution.

It set the tone for a turbulent reign of mixed messages and, while his players sometimes struggled to pass the ball, Bruce was deadly when it came to dispatching the buck, a view shared by several of his squad.

Last year Bruce could not understand questions over his tactics, misinterpreting it as ‘abuse’

To his credit, though, the team survived and so did he, in part because owner Mike Ashley had no intention of settling an £8million payoff. It was, on Bruce’s behalf, a smart insulation tactic to negotiate that sum.

But he also identified the senior players he needed to keep on side and, while performances were typically unsightly, a team spirit, a dose of good fortune and the brilliance of Allan Saint-Maximin and goalkeeper Martin Dubravka meant that results were okay. Good enough to finish 13th on 44 points in his first season, at least. By every other metric, however, the team was in regression.

In his second season, and in the middle of an 11-game winless run, reporters pressed Bruce on tactics. His response? ‘Where’s all this come from?’. He could not understand the debate and would often misinterpret criticism as ‘abuse’.

For a manager who repeatedly claimed to have ‘skin like a rhinoceros’, he was as sensitive as the needle of a compass. He just wanted to tell us that, when his best players were fit, everything would be fine.

That, though, simply exposed the absence of a safety-net for those left behind when the likes of Saint-Maximin and Callum Wilson were injured. It is with good reason Saint-Maximin is nicknamed ‘Plan A’, for his maverick quality has bypassed a lack of strategy.

It was during the first half of last season that dressing-room discord began to spread. It is a small example, but during a team meeting ahead of Newcastle’s 2-0 defeat at Manchester City on Boxing Day, sources say Bruce spoke of ‘hitting Big Andy (Carroll)’ with direct balls. The players, it is said, were confused, for Carroll was on the bench.

Others, meanwhile, grew frustrated with Bruce instructing them from the touchline to, ‘run, run, run’, and as one player said, ’Run where?’. 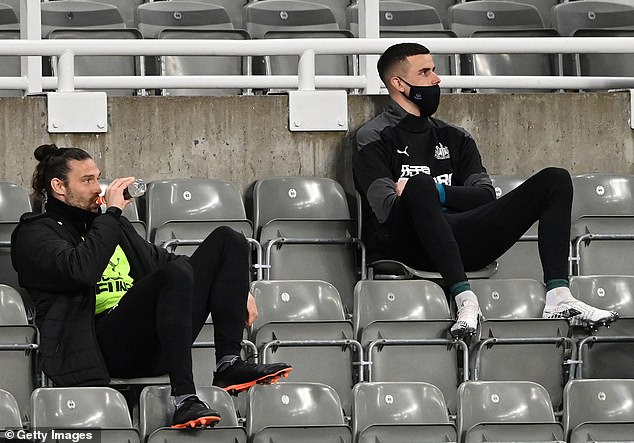 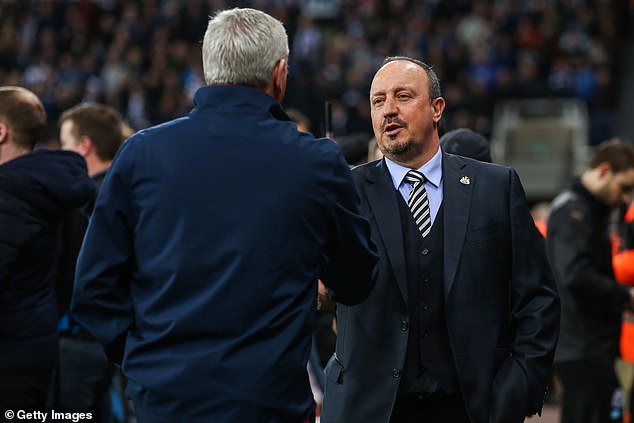 But the biggest complaint among many was that ‘professional’ standards around the training ground were not what they should be. We know of one player who regularly returned to his old club for fitness and nutritional programmes.

There was also frustration at excessive days off and a feeling that the schedule was designed to suit Bruce going home to Cheshire.

When the players turned up to train on the first Thursday of the recent September international break, they were stunned to learn Bruce had gone on holiday to Portugal.

But their anger intensified when, on the following Monday, some reported to the training ground in the morning only to be told their manager’s Jet2 flight did not get in until the afternoon. 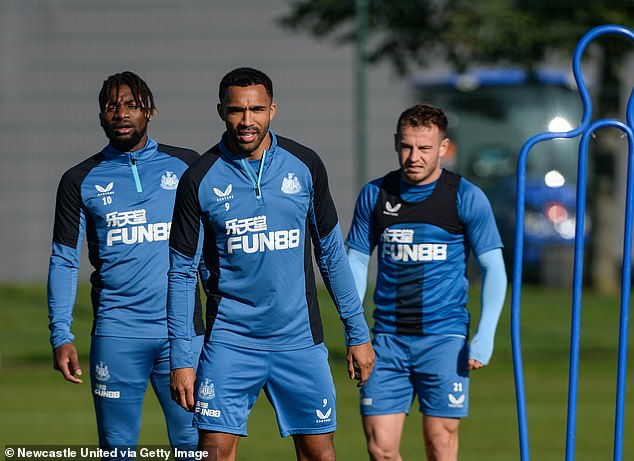 Players complained that ‘professional’ standards around the training ground had dropped

For while the players had welcomed a more laid-back approach during the early days of Bruce, more recently they were left longing for the discipline and attention to detail of Benitez.

The former manager has remained a theme throughout the past two years, Bruce using him as a yardstick for success – he matched him in terms of points, granted, but everything else pointed towards the deterioration of a decent side.

His comments on Benitez were rarely sincere, either, and one barbed reference to ‘the mighty Rafa’ infuriated supporters.

On that same day in January, Bruce spoke about maintaining his ‘dignity’, and then, without naming him, referred to Eddie Howe as ‘the fella from Bournemouth who got a team relegated’, a bitter retort to a newspaper poll in which supporters picked Howe as their choice for next boss.

Week on week, fans were offended by the manager’s comments and believed he was a source of embarrassment for the club. Lately, a significant number of players have also resented his presence and were desperate for change. 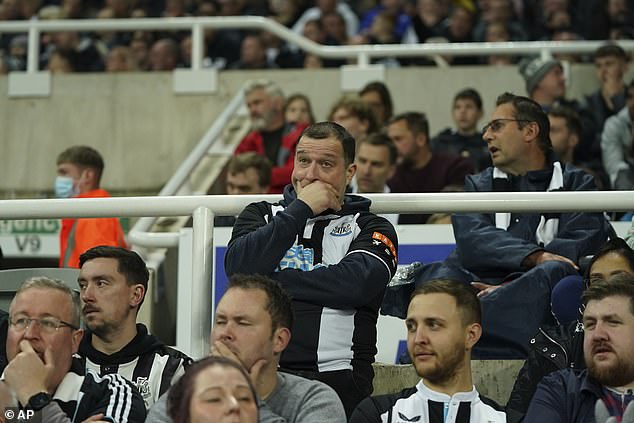 As Rich Sutherland, host of the Villa Park Podcast, said: ‘People from the outside never understood and used to look at us and say, “What are you moaning about with Bruce?”. Everything I’ve seen and heard from Newcastle fans is exactly what we went through. You need to live Steve Bruce as a supporter to know Steve Bruce the manager.’

It is true. To survey results alone enabled one to present a logical defence of Bruce. But as Graham Carr, the former Newcastle chief scout, told Sportsmail last year: ‘I always got a feel from supporters in the crowd about who they like. I’ve always said, people who watch a team regular know more than scouts do.’

That 94 per cent of members of the Newcastle United Supporters Trust said that they wanted Bruce to go – in a poll taken before the takeover – revealed the strength of feeling against him.

Finally, someone has listened to them. The survivor could survive no more. What he leaves behind, to no one’s surprise, is a team fighting for survival.