Just three games into the round-of-16 of Euro2020 and we have our first upset as Czech Republic pulled out a stunning 2-0 victory over the Netherlands in Budapest.

They were deserving of their win, more composed, more careful and unquestionably more decisive than the Dutch, who take with them a 100 per cent record in the group stages with absolutely nothing else to show for it. Tomas Holes gave Czech Republic the lead on 68 minutes, meeting Tomas Kalas’ header with one of his own, before Patrick Schick netted his fourth goal of the European Championships 10 minutes from time.

It is a result that opens up the more open side of the bracket. The Czech Republic will face Denmark in the quarter-finals next Saturday (3 July) with a very real chance of reaching the semi-final stage as they did in 1996.

Naturally given what we had seen so far, many had pencilled the Dutch in for that spot, not least the Dutch themselves. And among bemoaning a missed opportunity, the defeated will dwell on an incident seven minutes after half-time that turned the match on its head.

The deciding moment was unequivocally the sending off of Netherlands defender Matthijs de Lift after he handled the ball to prevent Schick from a free run at goal. As the free-kick was set, a VAR check confirmed the Juventus defender had to be given his marching orders. 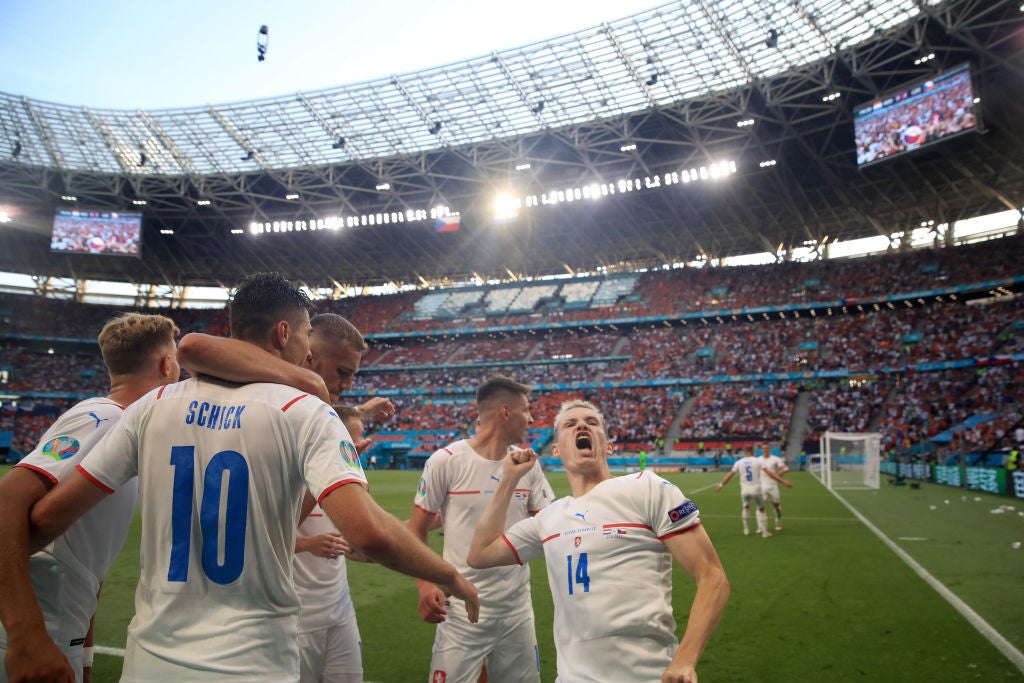 From then on, there was only one winner, but primarily on the balance of play. Despite dominating the first half and throwing themselves forward in desperation at the end, Netherlands failed to register a single shot on target. A statistic that hides the fact Donyell Malen should have given them the lead 27 seconds before de Ligt saw red.

This match was very much a meeting methods. Some might call it “philosophies”. But, really, it was more primitive than that.

Frank De Boer’s 3-4-1-2 had the Netherlands as standout group-stage entertainers, replete with the suspect areas all the very best showmen. Czech Republic on the other hand have arguably been the canniest operator. Jaroslaw Silhavy has implemented a structured yet relatively basic plan, leaning on the diligence of the whole rather than over-reliance on Schick’s creativity. Sharp-witted without ever being witty.

But the knockout stages, whether club or country, offers the unique filter of doing it when it matters most. Contenders and pretenders are separated, and often method and ambition. When the stakes are raised, we find out just how much trust there is in the processes that got these sides to this stage.

The offshoot can be that we, the spectator, are left short-changed. The seriousness of the occasion consuming enjoyment as both teams opt for probabilities over possibilities leading to tedium that has seemingly been reserved for England games this tournament.

Glory, though, to us. For this was nothing of the sort, confirmed when Denzel Dumfries, the wing-back’s wing-back, crossed streams to head from right to left, steaming onto a through-ball over the Czech Republic backline as early as the opening 20 minutes.

That wavy Dutch play we had become accustomed to after three group wins still prevalent in this fourth match. Dumfries bossed the right, while Memphis Depay, Malen and Georgino Wijnaldum drifted and darted into spaces to be found by Frenkie de Jong.

Yet, while they had the run of things, the Czechs who had the more tangible opportunities to rue in a goalless first half. Sharp work between Vladimir Coufal and Petr Sevcik saw the latter cross for Tomas Soucek, whose late dart into the box, a staple of most of his 10 league goals for West Ham this season, resulted in a diving header wide of the far post.

Don’t be fooled by the England game. This was the more authentic face of the team that made it through Group D with a professional win over Scotland and the better of a draw with Croatia. They had qualified by the time they arrived at Wembley, and it did not matter to them whether it was in second or third. And underlining that was the fact their five attempts in the first-half here matched their total on the whole against England.

One of those on 38 minutes should have resulted in the opening goal. An attacking overload of white shirts saw Antonin Barak with a free shot on goal that one of the few orange shirts – de Ligt – managed to deflect away for a corner. 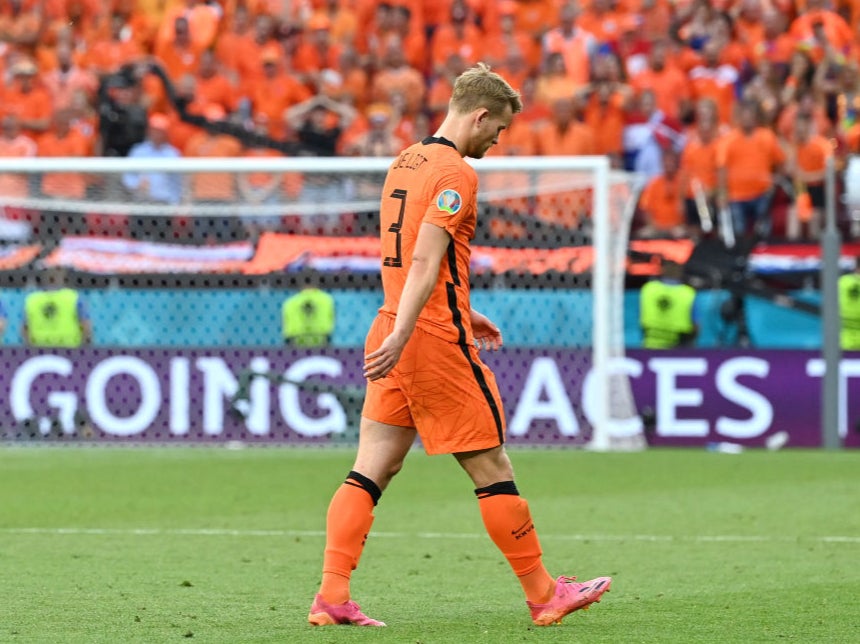 Matthijs de Ligt is sent off

This match, however, will be remembered for quite a different de Ligt intervention. Though he may have prevented a free run on goal from Schick, the loss of a man was as much of a gut punch as the best opportunity spurned moments before.

With the last foray forward with 11 Dutch players, Malen darted through the defence and found himself one-on-one. A moment’s hesitation and an unconvincing attempt to round Tomas Vaclik was snuffed out expertly by the 32-year-old goalkeeper. The corresponding return attack brought about the end of an equal contest in terms of personnel.

The effect was clear, as the Netherlands were pinned back in front of their goal, and even more pronounced when the deciding moment arrived. A header from one post to the other for another header were two opportunities a six-foot-two center-back might have come in handy. Barak’s cross from a wide free kick was perfect, matched by Kalas’s recycling and Holes’ finish.

As de Boer scrambled and shouted, Šilhavý quietly urged his team to shift that little bit further forward. And as the Dutch stretched, Holes darted to intercept a defensive header, breezed between Wijnaldum and Dumfries before cutting back to Schick for a typically precise finish.

Long balls forward and dainty footwork around the Czech Republic box were lacking in any purpose or, fundamentally, belief. And understandably so as a team that thrived on vibes were undone by structure. Free spirits shackled by a team who knew their limits and that of their opposition.

The more enjoyable collective has not progressed, but the better team won.