Sydney FC fans have even more reason to look forward to their next showdown with Western Sydney Wanderers because it could be the moment their team clinches the A-League premiership.

The Sky Blues continued their march towards silverware with a 4-1 thumping of Melbourne Victory on Saturday night, with coach Steve Corica declaring post-game that his side would now focus on wrapping up the title as quickly as possible. 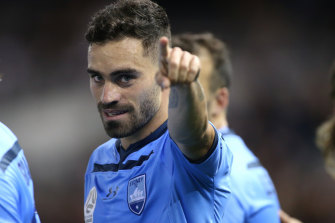 Anthony Caceres starred as Sydney FC continued their march to the A-League premiership with a 4-1 win over Melbourne Victory on Saturday night.Credit:AAP

The quirks of the A-League fixture mean that it could very well happen in a fortnight's time, and in Western Sydney's backyard.

Sydney's next two fixtures are against Perth on Saturday night, then four days later against Wellington Phoenix – both at Netstrata Jubilee Stadium.

If the Sky Blues win those matches, that would mean they can secure the Premiers' Plate in the March 21 derby against the Wanderers at Bankwest Stadium.

If that's how it all pans out, Sydney won't get their hands on the trophy that night. Club chief executive Danny Townsend confirmed they will hold off on any presentation until they are in front of their home fans. Should they win it in the derby, that won't be until their April 3 home clash against Western United at Leichhardt Oval – but nothing will stop them celebrating the significance of their achievement in front of Wanderers fans.

"I guess we've got to take it game by game – the most important thing is our next game, and getting the three points," said midfielder Anthony Caceres, who scored his first goal for the club in the come-from-behind win over Victory.

"Hopefully we can win it as soon as possible and if that's away at the Wanderers, that's great. It'd take some pressure off us and allow us to rotate the team with all the competitions that we're in, but we strive to win every game we're in. We're always after the best result possible."

Sydney already has plenty of motivation to win the derby, considering the Wanderers are the only team to have beaten them in the A-League this season – and they’ve done it twice. There is also the potential to deliver a mortal blow to Western Sydney's top-six aspirations, which took a hit in Friday night’s 3-1 defeat to Brisbane Roar.

It gets better for the Sky Blues faithful, and worse for their cross-town counterparts – there's every chance they could be holding aloft a different trophy at Parramatta later this year.

Bankwest and ANZ Stadium have been earmarked as the venues for the A-League grand final on the weekend of May 16-17, should Sydney FC lock in hosting rights.

But ANZ would only be used if a high-drawing opponent necessitated the use of the 83,500-seat Olympic Park venue over Bankwest's 30,000-strong capacity.

Of the teams still in realistic finals contention, only the Wanderers fit that bill – making the prospect of an A-League decider at Parramatta very, very real.