After five years of being in the shadows of their bitter rivals, Western Sydney Wanderers have turned the tide of the derby after clinching a dramatic 1-0 win over their Sydney FC at Netstrata Jubilee Stadium on Friday night.

Having won just once in 18 games against Sydney FC, the Wanderers have maintained a perfect record in the derby after clinching a second successive win over the Sky Blues this season. An 81st-minute winner from captain Mitchell Duke maintained the dream start to life in the dugout for interim coach Jean-Paul de Marigny, who is set to be rewarded with the job on a permanent basis, according to Wanderers sources. A top six finish is now in sight for the Wanderers but de Marigny isn't putting a target yet on their season.

"There is no set ceiling, there is no particular goal. I don’t want to be boring because I am not a boring guy but it is all about one game at at time and getting the boys to believe in each other," he said.  "It’s great to see players expressing themselves and maximising their ability. 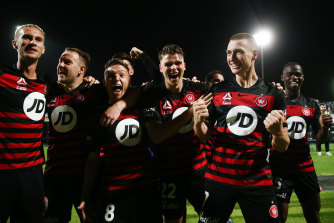 After having the wood on Western Sydney for so long, the Sky Blues were left with the empty feeling so often experienced by the other half of the city after missing several chances and succumbing to a late sucker-punch. More concerning for the hosts, they are appearing to become spellbound by the Wanderers, who are the only team to have beaten the runaway league leaders this season.

The thrilling match rewarded effort more than affluence. The Wanderers were the more dogged, Sydney were best in possession. When they could muster spells of possession, they looked dangerous and a defence-splitting pass from Luke Brattan in the 20th minute put the Wanderers on notice. However, his target, Adam Le Fondre, let the visitors off the hook with his finish.

If there was a blemish to the first half it was the behaviour of the travelling fans. Two days after posting immature and homophobic jibes at their rivals, Wanderers' supporters showed old habits die hard by igniting four flares on the half-hour. Covered by an orange mist, they may have missed their side's best chance of the half when Nikolai Muller rattled the cross bar with a wicked shot from distance.

The Wanderers had no hesitation to fire from long range and fullback Daniel Georgievski almost got lucky from more than 30 metres when he tried to chip Andrew Redmayne in Sydney's goal.

On the stroke of half-time, it was Sydney who should have snatched the lead. Le Fondre's cross found Kosta Barbarouses unmarked inside the box but the New Zealander's volley shaved the outside of the post.

The aggressive system and relentless press that worked for the Wanderers remained after the break while the Sky Blues sought to pry open space with probing, considered passes. As the game wore on, the latter worked better. Western Sydney's over-eagerness got the better of them and it wasn't long before they began to tire.

By contrast, Sydney had plenty in reserve and showed that with a well-worked counter attack on the hour. Le Fondre picked the run of Milos Ninkovic at the far post with a perfectly weighted cross, only for the Serbian playmaker to skew his header wide from point-blank range.

However weary, the Wanderers still had plenty of life. After coming close twice earlier, they summoned enough strength to shatter their rivals. A superb cross from Tate Russell landed upon Duke and from close range, the Wanderers captain made no mistake, shattering the hosts and sending the few thousand travelling fans into pure delirium.

The away bay celebrated wildly, however a few hundred Wanderers supporters missed the moment to cherish, leaving early to ignite more flares on Jubilee Avenue behind the stand before being marched off by mounted police.

Neither their behaviour nor a red card for Daniel Georgievski for lashing out at Sydney's Marco Tilio could sour Wanderers' mood as Western Sydney left believing this could be the start of their own reign of derby dominance.