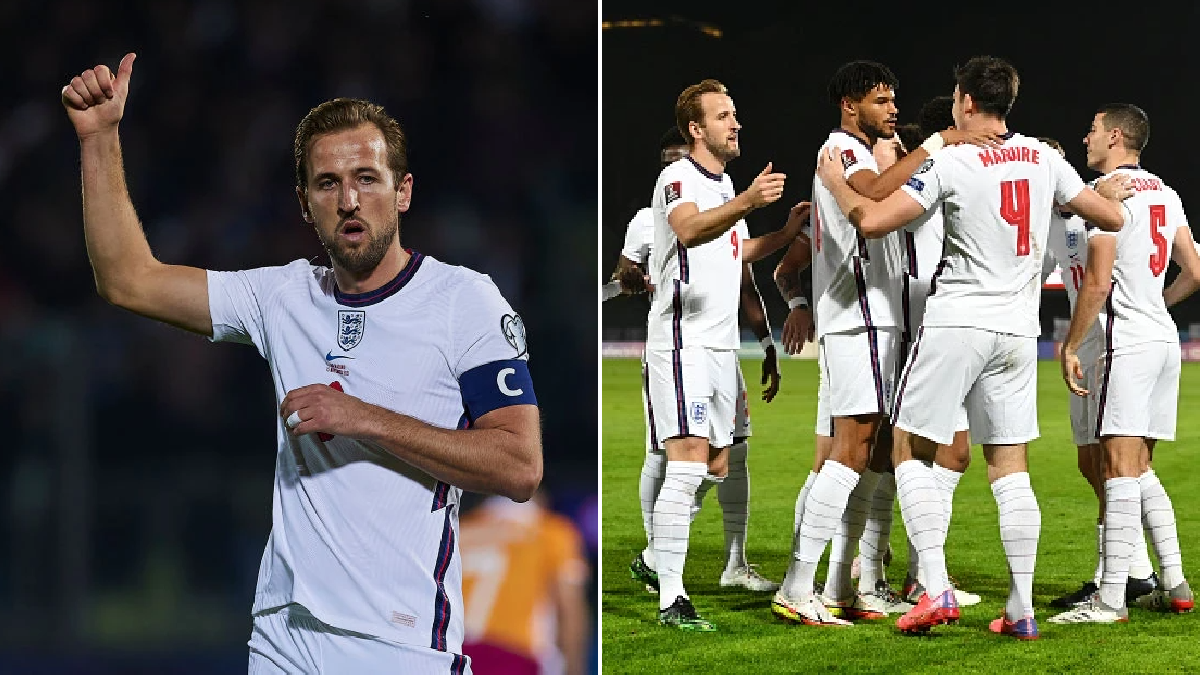 England have finally confirmed their place at the Qatar 2022 World Cup finals after a ruthless display saw them hammer San Marino 10-0 in the final match of their qualifying campaign.

Four goals from Tottenham striker Harry Kane, accompanied by strikes from Harry Maguire, Emile Smith Rowe, Tyrone Mings, Tammy Abraham, Bukayo Saka and an unfortunate Filippo Fabbri own goal gave England a more than comfortable victory against the minnows, who had Dante Rossi sent off with 20 minutes to play.

The victory margin was England’s biggest in their competitive history as they never once dropped off the pace throughout the entire 90 minutes.

England went into the game needing just one point to top Group I and qualify for next year’s World Cup ahead of Poland, who started the night three points behind them going into he finals round of matches.

The Three Lions, who made the brighter start to the game, took the lead in the fifth minute when a dangerous out-swinging Phil Foden corner was met by Manchester United star Maguire, whose bullet header was too powerful for the San Marino goalkeeper Elia Benedettini.

Maguire opted to celebrate the goal in less controversial style, after being labelled as ‘embarrassing’ by former United midfielder Roy Keane for his goal celebration against Albania.

Saka thought he doubled England’s lead when his deflected strike crept into the net, only for the San Marino centre-backFabbri to be credited with an own goal.

However, England were awarded a penalty after Foden’s strike was deemed to have hit the flailing hand of Rossi in the box before Kane slotted away the spot-kick to put the game already out of sight.

The Tottenham striker doubled his tally for the night just after the half hour mark, when he latched onto a well disguised pass from Smith Rowe, before his scuffed shot somehow found a way into the corner.

San Marino had a good chance to score a dream goal just a minute later, but Nicola Nanni’s defected shot was well tipped around the post by Ramsdale, in what was his first action of the match.

England were awarded another penalty when Kane’s header hit the arm of a San Marino defender from point blank range, before the England captain made it back to back first-half hat-tricks in successive matches with an exquisite finish into the top corner.

Kane added his fourth and England’s sixth on the 42nd minute, to become the first England player to score four goals in a game since Arsenal star Ian Wright in 1993.

Southgate brought Chelsea loanee Conor Gallagher on at half-time for his international debut after an impressive start to the season with Crystal Palace.

Second-half substitute Abraham could’ve, and perhaps should’ve scored England’s seventh of the game, but the Roma striker chipped his shot over the bar when put through one-on-one by Kane.

But they didn’t have to wait much longer to add to their tally as a wonderful night for Smith Rowe was capped off with a debut goal when he found the net from inside the box following a deft flick from Abraham.

San Marino’s night went from bad to worse when Rossi pulled down Gallagher, before being awarded his second yellow card of the game.

And from the resulting free-kick, England made it eight when Trent Alexander-Arnold’s free-kick was met by a looping header from Aston Villa defender Mings.

Gallagher almost got in on in the act, but his shot from close range hit the post before Bellingham’s lashed shot found the net, only to be ruled out for a foul in the build-up.

Abraham added England’s ninth with a neat finish, before Saka tucked away a header just a minute later to put the goal tally into double figures.