Another oh so near, and the most painful yet. England’s wait will go on to at least 56 years as Italy seize the moment, and the game, to lift their second European Championship.

That it was penalties, and the element that Gareth Southgate was supposed to address more than any other, only added to the anguish. That it was Marcus Rashford, Jadon Sancho and Bukayo Saka only added to the unfairness of it in terms of emotion – not that Italy will see it like that. They more than deserved their win.

The really big question that will at least go on until a trophy is finally won – and they will surely never get a better chance than this – is why Gareth Southgate’s side so squandered the initiative; why a 1-0 lead was allowed to become 1-1 and then even worse.

There are maybe bigger questions for the organisers of this tournament, given how shambolic – and downright dangerous – the circumstances at Wembley were. Supporters told The Independent that “hundreds, “maybe over a thousand fans” has got in without tickets, and that could be seen all around as supporters crammed into spaces and there were in many places two a seat.

It just meant that there were even more England fans there to witness this pain. The great homecoming ended up seeing a few home truths, as at least some of the remaining criticisms of Southgate were born out. His caution undid England here. The game – like the whole tournament – had fallen their way and was theirs to be won. 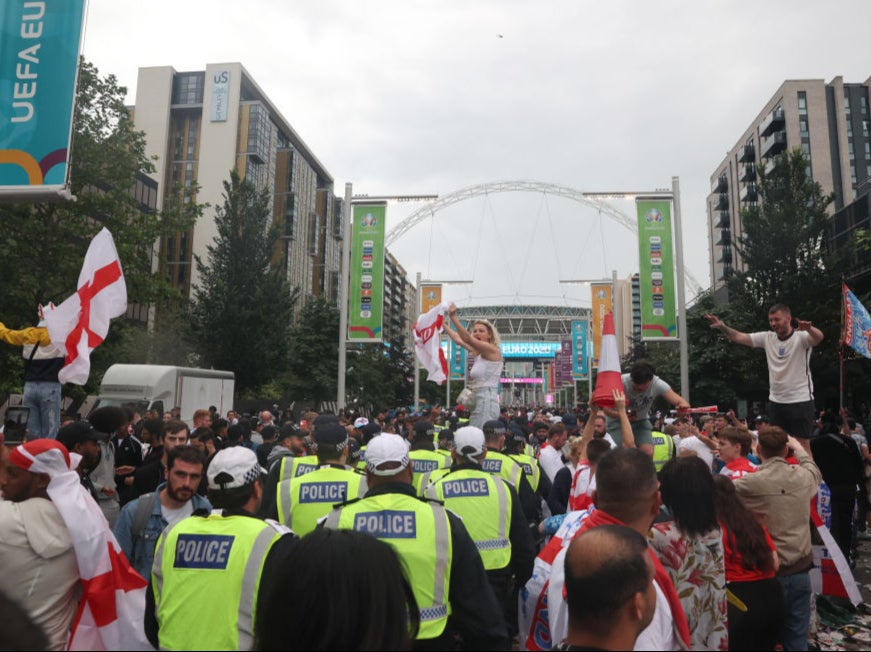 So many advantages evaporated, right up to Luke Shaw’s opening goal and that superb start.

They even had to endure the brilliant Federico Chiesa joining Spinazzola on the bench. They also had to endure a dismal opening, and what seemed a sure sign the home team would at least take glory.

The opening goal wasn’t just a moment of deafening celebration, but seemed one of definitive vindication. Southgate had immediate pay-off for another tactical decision. It wasn’t just that one wing-back scored, but that the other set it up. Neither Shaw nor Trippier would probably have been in these positions in quite the same way if Southgate had gone with a four but here they were, just punishing Italy.

The force of Shaw’s finish was almost a distillation of the conviction in England’s game. Trippier floated ihis cross over a paralysed Italian defence, and Shaw just followed through with his run to drive it past Gianluigi Donnarumma.

Roberto Mancini’s side were badly missing Leonardo Spinazzola, given how he would have pinned Trippier back, but that wasn’t all they were missing. They were also missing coherence, speed, sharpness and any attacking threat. It was like they didn’t know how to stop England coming at them, and couldn’t figure out how to get behind them.

In one stoppage, Mancini could be seen manically gesticulating at Chiesa. The truth was that the Juventus forward was the only player offering any real threat and eventually turned the game, which made it all the more cruel when he was forced off before the end of normal time through injury. Italy had lost their two best players for the climax.

There were times here when Chiesa had to do it all himself. He was the source of Italy’s most dangerous moment of the first half, as he broke from deep to shoot narrowly wide, but that was part of the problem. For the second, he at least managed to work his way into England’s box but Jordan Pickford palmed it away.

It was a rare foray, getting that far, as Italy were reduced to speculative long shots by the half-hour. The great wonder was why England didn’t build on that at the time.

They seemed content to sit and try and contain Italy through shape alone. It is remarkable given Southgate himself had spoken against this, and been so conscious of precisely these situations.

It of course had the effect of inviting Italy on and rewarding them with the initiative.

Italy, for their part, more than took charge. Marco Verratti began to take control of the game rather than just taking control of the ball for aimless possession, There was purpose now.

Chiesa – of course – signalled that with one purposeful run this time into the English box that brought a fine save out of Pickford.

That was when it really started to run away from Southgate’s side. It was as if Italy in that moment realised a vulnerability in England.

Pickford wasn’t so sharp for the equaliser, but then no one in the England backline was. A team so good at the basics for so much of this tournament completely failed to deal with a corner, allowing Verratti to force Pickford into a meek save off the post before Leonardo Bonucci drove in the loose ball.

Substitutes inevitably saw the game swing again, as Southgate once more used England’s array of attacking options to effect, but there was also one that wasn’t expected.

The brilliant Chiesa had to go off, removing so much of Italy’s thrust. It was now Italy’s turn to stifle England.

The prospect of penalties weighed over the game. The players ended up feeling the immense pressure, worse than any other.

Andrea Belotti was the first to buckle. Rashford followed with a run-up that betrayed his anxiety. Sancho stuttered too. Jorginho had the chance to win it. Even he missed. Poor Saka had a reprieve. There was no relief.

It’s another oh-so-near – closer than ever before, and yet even further away.