Other than the small matter of losing the biggest game of their lives on penalties less than two months ago, everything had been going too well for England of late, and Gareth Southgate knew as much.

“There are days where you’re having a quiet day and I used to think: ‘Okay, what’s going to happen?’” he said in the build-up to this World Cup qualifier. “You go looking for problems when actually you might as well just enjoy those days and have an extra 20 minutes on the sofa because you know the challenges will come.”

That challenge finally arrived in Warsaw, in the form of a battle-ready, belligerent and beard-pinching Poland. Damian Szymanski’s stoppage-time equaliser ended England’s 100 per cent record in qualifying, on an sometimes ill-tempered evening at the Stadion Narodowy.

This was no disaster. Southgate is still sitting comfortably on that sofa, just as England are sitting comfortably at the top of Group I four points clear of second-place Albania with four games to play, two of which are against Andorra and San Marino.

A draw away to Poland is not a bad result in itself, either. It might even be considered a good one, given that this was England’s most challenging engagement of the qualifying campaign on paper, and there’s no need to face Paulo Sousa’s combative side again.

That does not mean there were no lessons to learn from this late collapse, though, or a couple of familiar threads to pull at.

Again, England surrendered a 1-0 lead deep into a second half like against Colombia, Croatia and Italy. And again, when the final whistle sounded, there were questions over whether their manager could have done more to change things from the touchline. Southgate chose not to make any substitutions.

Of course, after a World Cup semi-final and European Championship final, he has achieved more than enough to earn the trust of pundits and punters alike, but that decision not to make a single change was still curious. With it, he became the first England manager in 25 years not to use his bench during an entire game. Southgate probably remembers the last occasion. It was the Euro ‘96 semi-final.

When asked whether he was tempted to make a change at all as England attempted to hold out for the win, Southgate said: “No, because we were in total control of the game.

“To bring players into that moment when everyone was performing to a good level and we were in control of possession, you can put players into the game who’ve had to sit in the stand and it’s not so easy to come in in those latter stages.

“There were a couple of moments we looked at it and said: ‘No, we’re doing well, no problem’.

“We were going to refresh the wide players right at the end but that would’ve been to wind the clock down more than anything, but before we could get them in we conceded and it wasn’t a good time to make a change.”

In his defence, he can point to some questionable calls by referee Daniel Siebert, particularly in a first half that threatened to boil over, and ended with scuffles between both sets of players before half time.

This collapse from a 1-0 lead did not quite follow the same, uneasy pattern as Croatia or Italy either. Southgate is right that England enjoyed a relative level of control after Harry Kane’s long-range breakthrough 18 minutes from time, which lasted right up until Poland’s frantic stoppage-time spell of pressure. 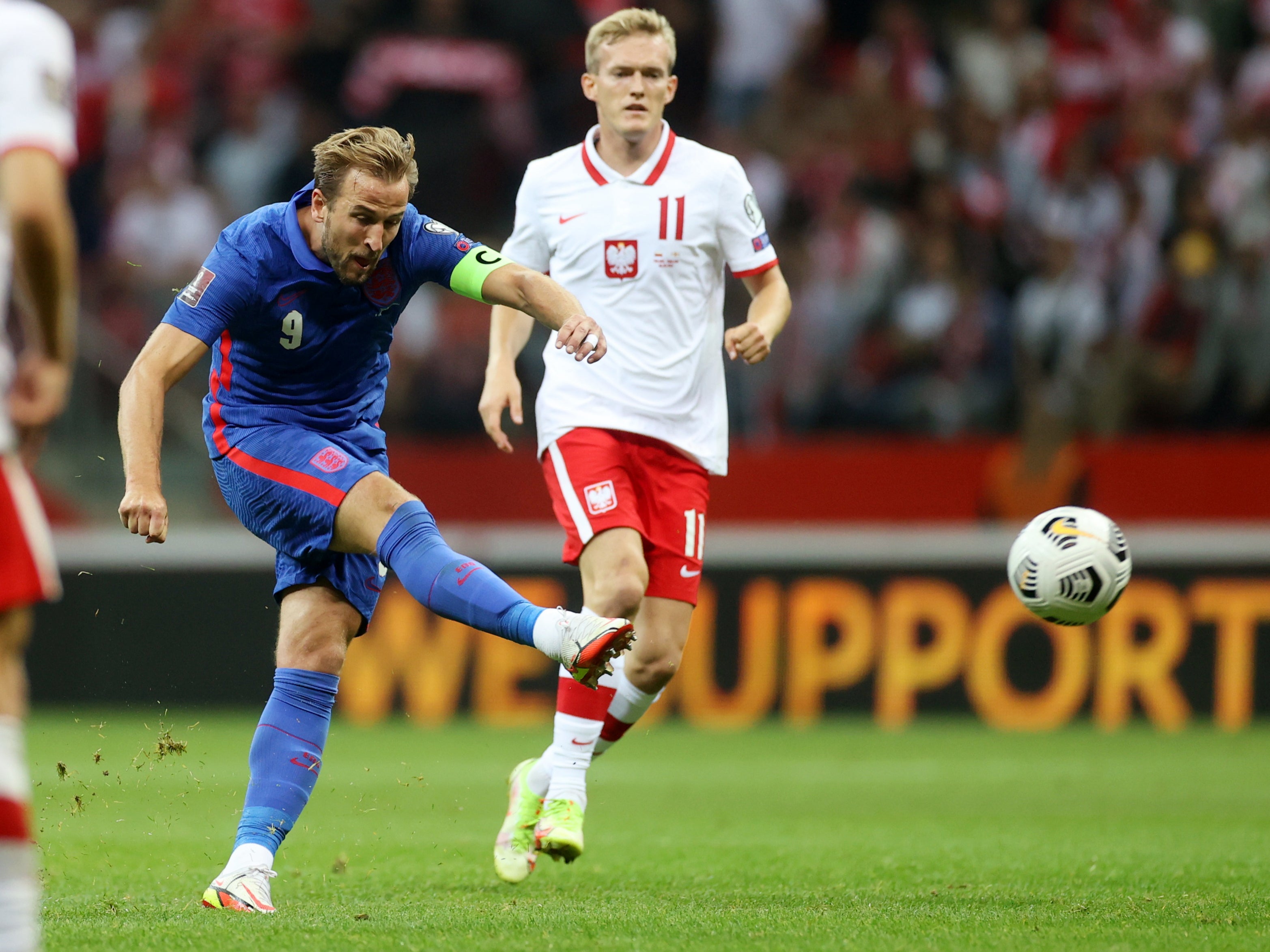 Kane’s goal was his 41st at international level, only his second to come from outside the area, but one that also meant that he has now scored in all of his last 15 World Cup and Euros qualifying matches. In games like these, he feels almost inevitable and the all-time England scoring record – Wayne Rooney’s 53 – is now beginning to come into view.

It is firmly in Kane’s sights. After beating Andorra at Wembley on Sunday, Southgate revealed how when he told Kane to strip off and prepare to come on as a substitute, it took him about three-and-a-half seconds to unzip his tracksuit, tie his laces and stand ready on the sideline.

You feel that for as long as England have a goalscorer as singularly driven as him, most of these major tournament qualifiers should be easily negotiated. Most, that is, but not all.

This was one that got away from Kane, Southgate and England in the final moments, partly because of a few familiar shortcomings, and a proactive change from the bench may have helped. Still, there should not be an overreaction. England remain on course to reach Qatar. As far as setbacks go, this was a small one that could soon prove to be insignificant.

Yet it was a reminder that just because things have been going so well recently does not mean there is no room for improvement.