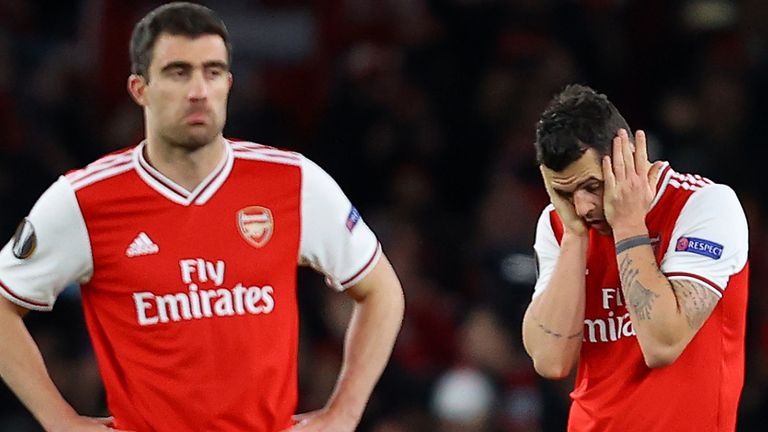 “It hurts big time,” Mikel Arteta said in his post-match press conference. “We had a lot of hope in this competition.”

The pain of this Europa League exit will take a lot of getting over for Arsenal and Arteta. This competition was a big chance of silverware and a route into the Champions League, but that all disappeared in dramatic circumstances as Olympiakos snatched a place in the last 16 at the expense of the Gunners.

There was a positive atmosphere starting to build around the Emirates Stadium as Arteta led his side to an unbeaten start to 2020. They had just had three wins in a week and everything was starting to look better, but now the Spaniard faces the biggest challenge of his short managerial career as he attempts to lift his players after that heart-breaking exit.

There is still the FA Cup to play for and although it is an outside chance, they can still finish in the top four of the Premier League to qualify for the Champions League. Arteta must now find a way to brighten the mood in the Arsenal camp, and quickly, because if he doesn’t all his good early work at the Emirates Stadium will be undone.

It is a big test for Arteta and his coaching staff, and he knows it. “I’m the first one, I have to lift them, it’s my job. That’s the first thing I have to do. First of all we have to digest it because it’s very, very painful tonight.”

It is a challenge they must overcome, though, starting against Portsmouth in the FA Cup on Monday, otherwise their season will be over very quickly.
Oliver Yew 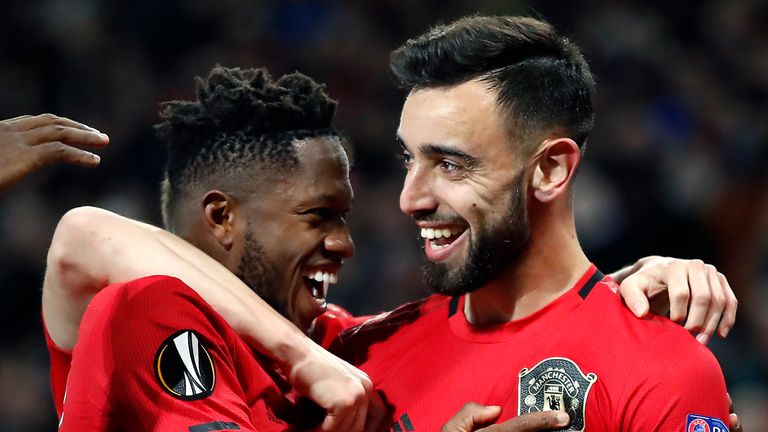 Manchester United’s performance against Club Brugge was nothing short of dazzling. They already had the advantage of an away goal and a second-leg tie at Old Trafford – and they did not waste either.

From the outset, United were vastly superior to their Belgian opponents, having the better chances and more possession. The game changed when Simon Deli was sent off for Brugge after a blatant handball and Bruno Fernandes slotted home from the spot after a lengthy VAR check.

There may have been a few concerns before the game when Anthony Martial was conspicuously left out of the matchday 18 and Odion Ighalo handed his first start. As it turns out, Martial has picked up a muscle injury – joining fellow striker Marcus Rashford on the sidelines – but Ighalo proved that he will be more than a suitable replacement despite some raised eyebrows at his Deadline Day arrival. As Ole Gunnar Solskjaer said, he is a “natural striker” and was in the perfect position to slot home from Juan Mata’s cut-back.

Fernandes, another January arrival, was also incredibly impressive. He had a hand in the three first-half goals and showed why Man Utd chased after him for so long. He is proving to be the right answer to their midfield problems and almost makes you forget that there is a World Cup winner in Paul Pogba waiting in the wings.

With Ighalo up front and flanked by Fernandes and Mata, United may have finally found a winning formula. Pepper in the speed of Daniel James and Tahith Chong, plus the return of Scott McTominay in central midfield alongside Fred, and things are finally starting to turn around for Solskjaer and his side.
Charlotte Marsh 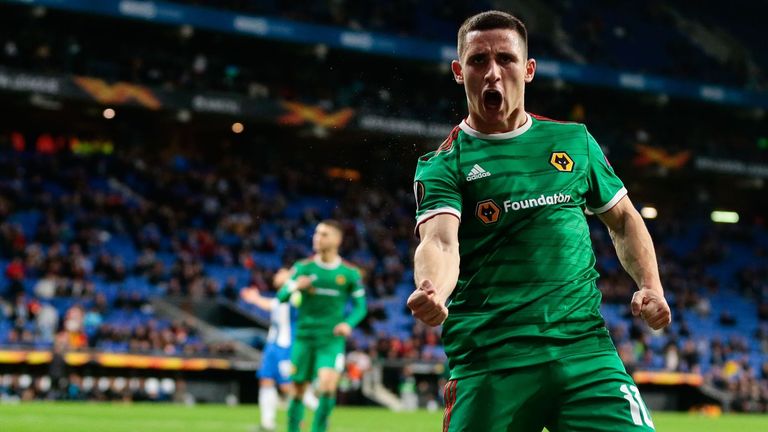 Despite the defeat, it is impossible to describe this as a disappointing night for Wolves, given the fact they have qualified for the last 16 of the Europa League less than two years after earning promotion from the Championship.

It is the furthest they have been in European competition in nearly 50 years.

Nuno Espirito Santo will be thrilled that his side have managed to progress through the tie, delighted that he could rest the likes of Raul Jimenez, Diogo Jota and Ruben Neves for the second leg and maybe slightly frustrated that his side lost their unbeaten European away record at the death.

While some of the understudies did not quite step up to the mark – which was always going to be a big ask given some of their rust – one real positive was Daniel Podence.

After three substitute appearances since his January move from Olympiakos, Podence was handed his first start and showed enough to suggest he will be a more than capable addition to Wolves’ forward line. The pacey 24-year-old was direct with his running and caused the backline of Espanyol problems at times, especially when Wolves were counter-attacking. He had one effort fly over the bar shortly after half-time and should have tried his luck again soon after, only to turn into trouble instead. 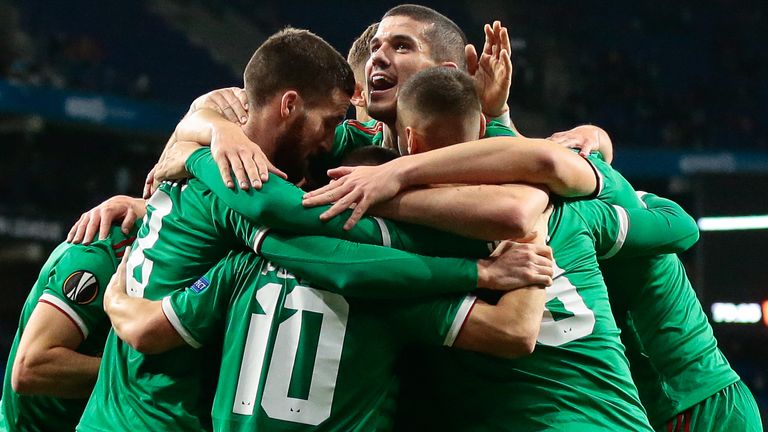 But it was his contributions to the goals that really stood out. The first will not go down as an assist, which is unfortunate as it was an intelligent piece of play that set up Adama Traore. Rather than just crossing the ball, he picked his strike partner out in the box with a pass and Traore was able to equalise at the second time of asking.

The second was fantastic initiative from both Podence and Max Kilman. The striker was alert when the ball went out of play and clever enough to keep his position five yards behind the final defender, call for the ball and drive into the box when Kilman found him with a quick throw-in. The rest was fairly simple as he crossed the ball across the six-yard box for Matt Doherty to tap in.

Wolves have options going forward, with Jimenez, Jota, Traore and Pedro Neto all vying for places. But theirs is a busy fixture list due to their European involvement and Nuno will have seen enough from Podence to know that he can rely on him whatever the situation, whatever the game. Another potential Portuguese gem at Molineux.
Matt Storey

Celtic throw it away after Edouard’s lifeline 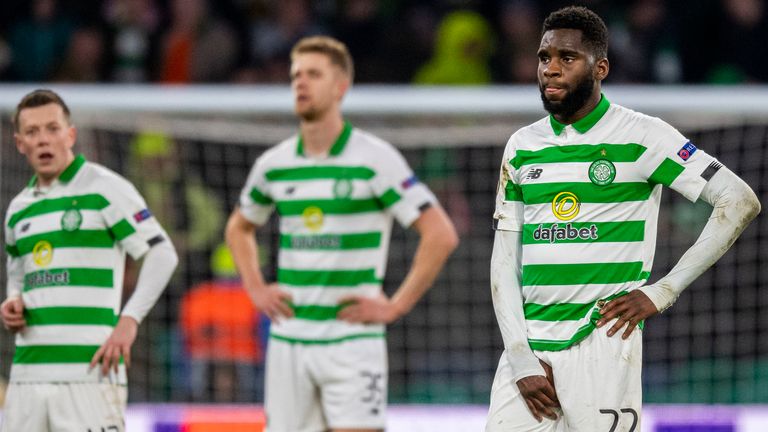 Celtic could have been out of sight in the tie by half-time of the first leg. Odsonne Edouard had four big chances to score in the opening three minutes before finally finding the net after 13, but in the end, Neil Lennon’s men had Fraser Forster to thank as his penalty save ensured they returned to Parkhead with a 1-1 draw.

The second leg followed a remarkably similar pattern to that of the first; Celtic dominated the first half but could not take their numerous gilt-edged chances and then wilted after the restart, allowing their opponents to take a firm hold on the game – barring an all-too-brief flurry after Leigh Griffiths’ belated introduction on 70 minutes.

It was a sloppy, disjointed defensive display from Celtic that was littered with individual and collective errors. Jozo Simunovic was the first to err, under-hitting a backpass to Forster to allow substitute Michael Santos the chance to score at the second attempt. Celtic looked jaded and laboured after that setback as Copenhagen grew in stature, but a VAR-awarded penalty, impudently taken by Edouard, seemed to swing momentum in their favour.