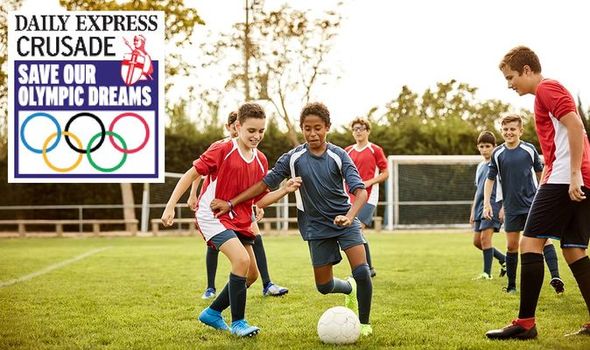 The ex-Liverpool ace, 51, said England has the “best” domestic men and women’s teams but this doesn’t translate at grassroots level. He added that the pandemic is partly to blame for “lots of negative impacts” on these clubs.

David said: “Once you lose teams in a league system, then the league starts to dysfunction.

“Although grassroots isn’t solely for kids ‑ it is for everybody ‑ the younger age are most vulnerable, because once they lose interest in being part of the team, they’ll navigate towards something else. Anything else, and therefore football will lose it.”

The environmentalist added how the social, mental and physical benefits of being involved in football at any level “outweigh the idea that someone has to be the next Harry Kane”.

David, who is also campaigning to get more women involved in the game, added: “Football is not about elitism.”

The Daily Express has highlighted the state of local sporting facilities through the Save Our Olympic Dreams campaign.

Primary and secondary schools will start to collect quality football boots from today as part of the Utilita Energy’s Football Rebooted initiative.

David said: “It was always an expense having to buy kit. Football Rebooted’s aim is to try and alleviate some of that by recycling essentially usable football boots.”

He returned to his former secondary school, Ridgeway Academy in Welwyn Garden City, to launch the scheme.

He said: “Getting these boots replayed will not only save families a few quid but will also act as a reminder about the power of upcycling and reusing items that still have a lot of life left in them.

“It’s about allowing anybody to be able to use facilities for their own benefit and wellbeing rather than just producing elite football.

“I don’t want to age myself but it’s kind of like, I played for fun, and became a pro. And a lot of the guys around me were the same.”

The Government could do more, he says, but he concedes it is “stretched”, partly because of the pandemic.

He called on grassroots teams to try and save money by being more efficient with energy, getting volunteers to help and urging local communities to do as much as they can themselves.

Before the pandemic there were thousands of grassroots football clubs struggling to cobble together enough money to exist.

During the pandemic, Utilita’s State of Play report revealed that 4,000 clubs didn’t think they’d survive – that’s 10 percent of all grassroots clubs in the UK. Too many have disappeared in the last two years.

When you consider that on average every club impacts the lives of 250 families ‑ promoting physical and mental health and a chance to be part of a community ‑ this is devastating.

Some of these clubs have been established for more than 80 years, with three generations playing in the same strip. What’s even more devastating is that these clubs could have been saved if the Government had intervened. Why didn’t they?

Football was invented in England, and our clubs keep kids on the straight and narrow, reducing the need for policing and other public funding, so why didn’t they fight harder to save them?

It must be heartbreaking for kids to see their club go to the wall, especially in the shadow of the Premier League ‑ the richest football competition in the world.

Back in the 80s, I was one of those youngsters, playing for my local team, Panshanger FC.

My mum couldn’t drive, so my friend and his dad would take me and watch me play in wind, rain, snow, and even the occasional bit of sun.

I’d pay my 50p a week subs ‑ giving the club a small but vital revenue stream.

It gave me the chance to get fresh air in my lungs and forge friendships that have lasted a lifetime.

I’ve been working with Utilita Energy, which invests heavily in grassroots football. By donating boots at www.footballrebooted.co.uk, you can impact a kids’ ability to get back on the pitch and support the survival of our grassroots clubs.

What is happening where you live? Find out by adding your postcode or visit InYourArea