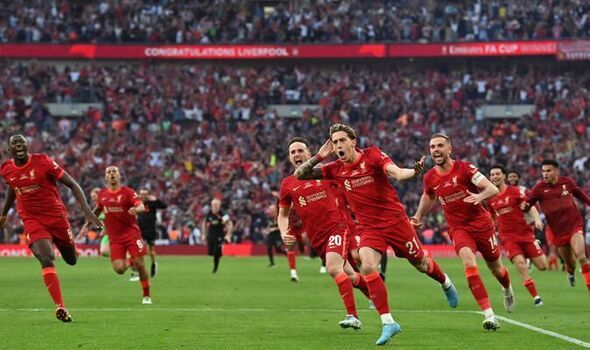 Chelsea take on Liverpool in the FA Cup final tonight (4.45pm) looking to avenge their Carabao Cup final loss at Wembley to the Reds in February. Eight-time FA Cup winners Chelsea have been in the final of this competition in both of the last two seasons but lost to Arsenal and Leicester, while Liverpool have not contested a final of England’s most prestigious tournament for a decade, having lost to the Blues at this same venue in 2012.

This is the fourth meeting between Thomas Tuchel’s European champions and Jurgen Klopp’s League Cup holders this term, with neither of the two sides winning against the other inside 90 minutes. There was a 1-1 Premier League draw at Anfield and a 2-2 stalemate in the reverse fixture at Stamford Bridge.

In the Carabao Cup final in February, the teams drew 0-0 after extra time before Liverpool won 11-10 on penalties with Chelsea goalkeeper Kepa Arrizabalaga sending his spot-kick well over the crossbar.

Having lifted that trophy already, Liverpool can move one step closer to a cup treble this term. They face Real Madrid in the Champions League final on May 28. A quadruple is also not yet out of the realms of possibility, although they will need other teams to do them a favour and trip up leaders Manchester City.

Chelsea, meanwhile, are looking to crown the season with more silverware after lifting the Club World Cup, though they suffered disappointment in the Champions League against Real Madrid in the quarter-finals. And they have been well adrift of City and Liverpool in the title race.

Tuchel said to BBC Sport pre-match: “A little bit [we have added motivation]. We will not get the Carabao Cup back. We were proud of how we played. There has to be a loser, unfortunately it was us. It was an unusual game and there were no regrets.

“The feeling of revenge is not very big. We don’t have the feeling we should’ve done better. It was never like this, even straight after. But we want to win it. We played two domestic finals, lost one, the second one is huge now. Liverpool are one of the strongest teams in the world so it’s a big one and I’m very excited.”

While Klopp reflected: “Chelsea are a really, really well-coached team. They have an idea for all different areas of the game, that’s how it is. They’re very organised defensively and offensively they have so much talent. It’s very interesting to prepare, to be honest. We play a final, an FA Cup final and it would be a real surprise if we met a weak team in that final.”

Express Sport provides live updates of the 2022 FA Cup final between Chelsea and Liverpool below.

The FA Cup banter is flying

The FA Cup banter is flying in the BBC studio ahead of kick-off, with Gary Lineker revealing that Alan Shearer is appearing in his eighth consecutive final as a pundit.

The former Newcastle striker famously never lifted the trophy throughout his illustrious career. Micah Richards then jokes that he can’t reveal where his winners’ medal is stored as Shearer might burgle him.

Chelsea and Liverpool have won the FA Cup an incredible 15 times between them.

The Blues have lifted the trophy eight times in the past, while the Reds have tasted glory seven times. Between 2007 and 2012, the Stamford Bridge side even won the competition four times in the space of six seasons.

And here’s Chelsea’s XI. Romelu Lukaku with three goals in his last two games STARTS unlike in the League Cup final. Timo Werner has to settle for the bench.

N’Golo Kante is only on the bench but Mateo Kovacic starts despite his injury scare at Leeds United earlier this week.

Liverpool have gone early with their team news. No major surprises in the absence of the injured Fabinho.

Ibrahima Konate, Andy Robertson, Jordan Henderson, Thiago Alcantara and Mohamed Salah are all back in the starting eleven.

Hello and welcome to Express Sport’s live coverage of the 2022 FA Cup final between Chelsea and Liverpool.

We’ll have updates throughout the evening as we wait to learn who will be this season’s victors in the oldest cup competition in world football.

We’ll have confirmed team news for you very shortly!