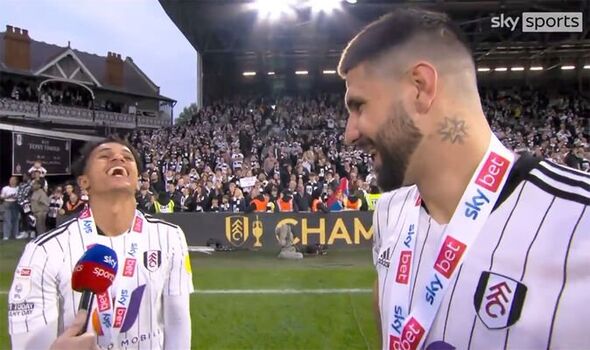 Fabio Carvalho has laughed off a question regarding his summer move to Liverpool from Fulham. The young winger is set to become a Liverpool player at the end of this season.

It has been widely reported that the Reds have agreed to pay Fulham a fee that could rise to over £7million. That comes after a deal collapsed at the last minute on deadline day in January.

Fulham smashed Luton 7-0 on Monday to secure the Championship title and Carvalho was asked about his future after the match. But he laughed when asked if he was joining Liverpool.

Carvalho, 19, has 10 goals and eight assists to his name in the Championship this season. His team-mate, and record-breaking striker, Aleksandar Mitrovic has hailed the teenager and sent an exciting message to Liverpool supporters.

Mitrovic said: “To be honest I cannot find the words to describe him. I know he’s a little bit shy and so I’m not going to praise him so much!

“But he’s an amazing young boy who loves football so much, who works so hard and puts a lot of effort in away from the pitch. He wants to learn always.

“He’s always so calm and I think he has a big future ahead of him. We’ll see what happens but I hope we play a few more games together because I’ve enjoyed this season playing next to him.”

An agreement was struck between Liverpool and Fulham in April. The Cottagers’ co-owner Tony Khan revealed this week that a deal has been agreed for Carvalho to leave.

“I really like Fabio,” Khan told the Athletic. “He’s a player we have always rated, coming out of the academy and we would have loved to have kept him.

“But we have made a deal that is best for the club and since that agreement, it’s worked out wonderfully because he has been such a valuable part of promotion. Marco [Silva] has done a great job with him.

“They have a great relationship and Fabio has been tremendous for us. He’s a huge part of the squad and it’s a massive loss but, because we have done good business, we can do good business to make sure we are strong in that position.”