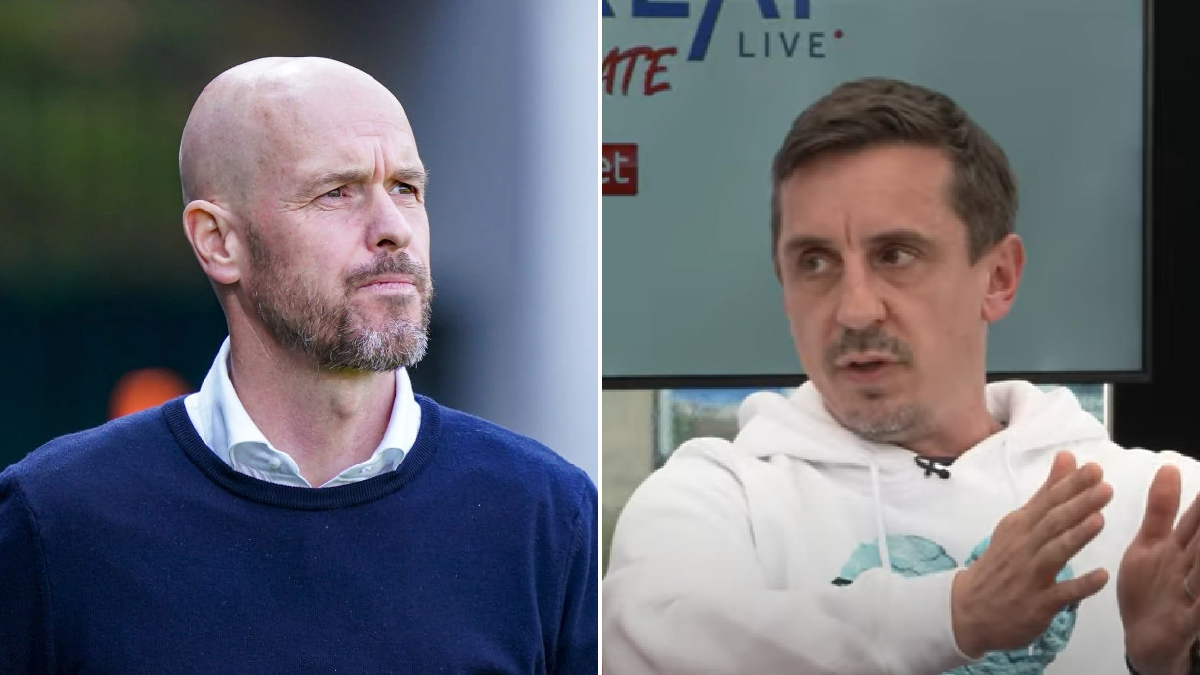 Gary Neville has revealed his ‘biggest fear’ for Erik ten Hag at Manchester United as the Dutchman looks to restore the club to its former glory.

Ten Hag signed a three-year deal with the Premier League giants last month and began his tenure at Old Trafford on Monday morning.

The 52-year-old won three Eredivisie titles during his five-year spell at Ajax but may find success harder to come by at Manchester United, who have not won any silverware since 2017.

Under Ole Gunnar Solskjaer and Ralf Rangnick, the Red Devils finished just sixth in the Premier League this season and recorded their lowest points tally since 1990.

Despite United’s recent struggles, Neville is ‘cautiously optimistic’ about Ten Hag’s arrival but still doubts United are run well enough at board level to compete with the likes of Manchester City and Liverpool.

‘The thing is my biggest fear actually for Erik ten Hag is not the job that he’ll do,’ former England defender Neville said on the Sky Bet Overlap show.

‘He could do a great job and still not succeed by the fact that if them two (Pep Guardiola and Jurgen Klopp) stay there, that’s a real problem that.

‘We’re all optimistic about a new manager coming in at any club, that’s how it works. But I’m actually very cautious in my optimism.

‘After Jose Mourinho and the mess of that he (Ed Woodward) had to go at that point or step away from the football side and bring in a football person.

‘The Glazer family are to blame for leaving Ed Woodward in situ for that period of time. Obviously now we’ve got a new CEO at Manchester United there’s going to be more power given to him.

‘I do fear that the operation on the football side is still not strong enough as other clubs in the league, it just can’t be.

‘My worry is they’ve still not gone external to bring in an outstanding football operator, but we’ll see what happens.’

In his first Manchester United press conference, Ten Hag said he is not risking his managerial reputation by taking the Old Trafford job.

‘I don’t see it as a risk,’ Ten Hag said. ‘I think this club has a great history, and now let’s make a future.’