‘Football without fans is nothing’: Borussia Monchengladbach fans stage protest their exclusion from Bundesliga return with banners… as they complain cardboard fans sends the ‘wrong signal’

German football fans angry at being excluded from the Bundesliga’s resumption vented their frustration yesterday — despite being barred from attending matches.

Banners protesting against games taking place behind closed doors were draped over the fencing at the showdown between Borussia Monchengladbach and Bayer Leverkusen on the second weekend of action in Germany.

‘Fussball ohne fans ist nichts’ — (Football without fans is nothing) — read one, while another proclaimed: For Borussia, against ghost games. 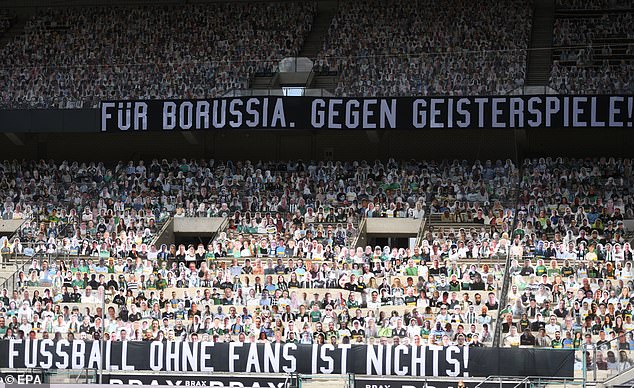 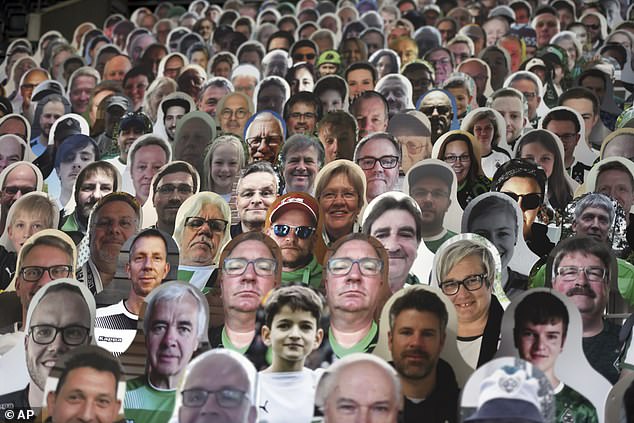 Many fans in Germany have denounced resuming the 2019-20 season so soon — they are the first of Europe’s big leagues to return to the pitch despite the coronavirus pandemic continuing to claim lives.

There have been 8,357 deaths in Germany of people who had the virus. Borussia club bosses had hoped that the unveiling of 13,000 cardboard cut-outs of fans around a deserted stadium would have added some welcome colour to the otherwise eerie atmosphere at the ground.

But it didn’t do the team any good —visitors Leverkusen won 3-1 — and protestors declared it an own goal.

‘The bleak backdrop of empty stadiums is exactly what these games represent and deserve,’ said Gladbach fans in a statement. 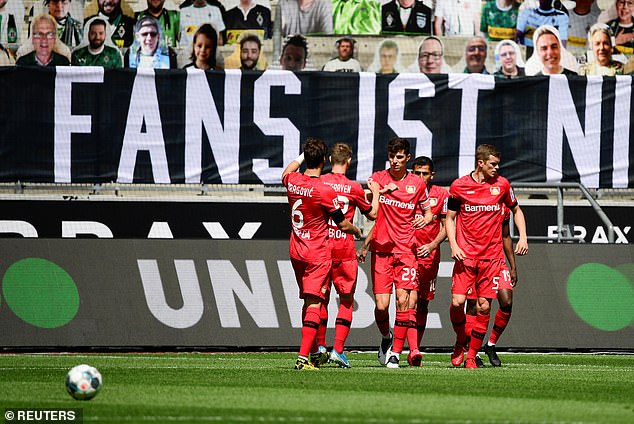 ‘We consider the initiative with the cardboard figures to be counter-productive. We understand the well-meaning idea behind it, but we consider the signal to be the wrong one.’

Fans had paid 19 Euros to have their faces pasted to seats — some Leverkusen fans had also bought images of their own faces to grace the away section of the ground — with the profits going to charities.

It was Gladbach’s first match at home since the Bundesliga restarted without fans and the cardboard cut-outs were deemed a hit with the players.

Coach Marco Rose and some of his players were also in the stands in two-dimensional form, along with greats of the club’s past.