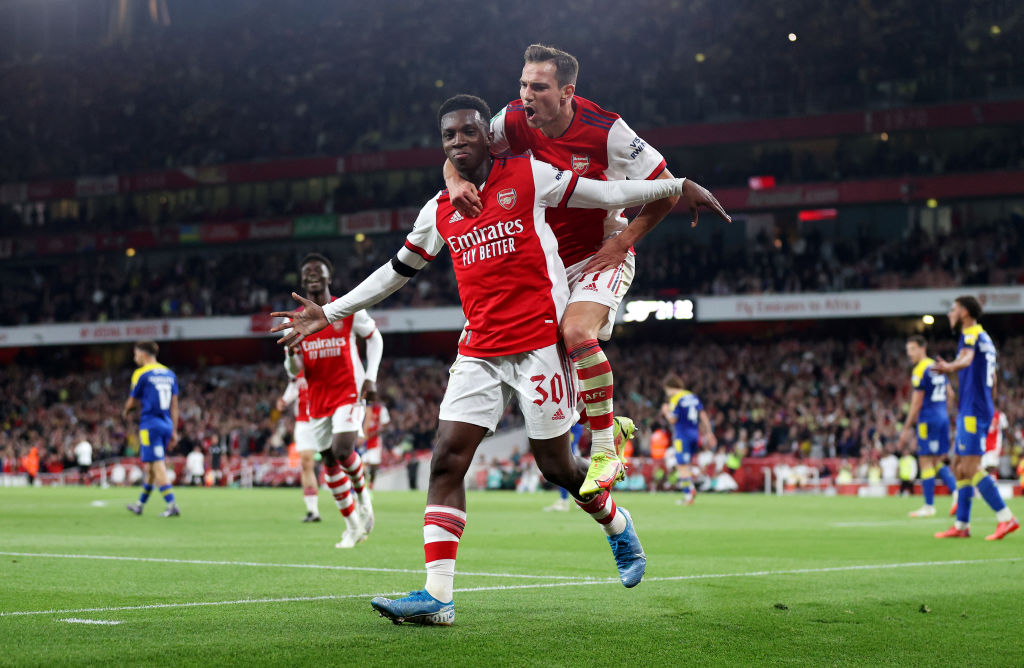 Mikel Arteta showered Eddie Nketiah with praise after Arsenal beat AFC Wimbledon 3-0 to reach the fourth round of the Carabao Cup, saying the forward ‘fully deserved’ his late goal after working and training ‘like a beast’.

Nketiah was handed his first appearance of the season after being named in Arteta’s starting XI on Wednesday night and the 22-year-old rounded off an impressive individual performance with an audacious backheeled finish with 10 minutes remaining at the Emirates.

The exquisite strike put the hosts out of sight against their League One opposition after Alexandre Lacazette’s early penalty and Emile Smith Rowe’s 77th minute effort.

Shortly after the final whistle, the Gunners discovered they will take on Premier League rivals Leeds United for a place in the quarter-finals of this year’s competition.

‘I’m so proud of this kid,’ Arteta told Sky Sports when asked about Nketiah’s display.

‘He hasn’t played much, there’s a lot of speculation around him. The way he trains, the way he behaves, he’s always willing to help the team.

‘He fully deserves what happens because he trains and prepares himself like a beast.’

At his post-match press conference, Arteta said Nketiah had been giving his team-mates a ‘lesson’ with his attitude and work-rate on a daily basis at the club’s training ground.

‘I think Eddie gives us a lesson every single day of how a professional should live in this job,’ the Spaniard added.

‘There has been a lot of speculation around him, a lot of debate and he puts his head down, he trains harder than anyone else, he looks after himself and he supports every team-mate under any circumstances.

‘I’m so happy for him. It’s not a coincidence that he’s able to perform at that level and physically how he manages the game because he trains like the best every day so I am delighted for him.’

Looking ahead to the next round, Arteta warned his players they were in for a ‘tough’ clash at home to Marcelo Bielsa’s Leeds.

Asked for his immediate reaction to facing Leeds, Arteta said: ‘Well I just found out!

‘We have experienced that one, we know how tough it’s going to be so it’s a big match.’