He could have lined up a bunch of certain friendly wins and banked the goodwill, but Gustavsson asked for the toughest schedule possible leading into the Olympics. He got it. And as the losses piled up against some of the world’s best teams, so too did the question marks over whether he was the right person to help this team finally deliver on its promise. 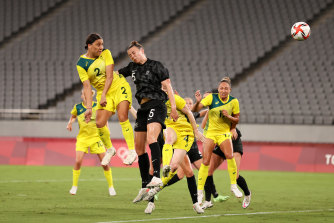 All along, Gustavsson maintained that he was looking at a bigger picture. On Wednesday night, for the first time during his turbulent tenure, that picture came into sharp focus for everyone else.

The Matildas’ 2-1 win over New Zealand was close to the perfect start to their Tokyo 2020 campaign. Whether they can use it to propel themselves onto the podium remains to be seen, but this performance at least came as a reminder to the rest of the world, their fans – and maybe even themselves – that they’ve genuinely got it in them.

Kerr is a case in point. Starved of service up front during Gustavsson’s first five matches in charge, Australia’s golden girl was on fire again, triggering the play that led to their opening goal before scoring the second one herself to break her duck under the new manager.

Hours earlier, Sweden produced a stunning 3-0 upset win over the United States, delivering the Americans their first defeat in 44 matches stretching back to January 2019. Both teams are in Australia’s group. The Matildas next face Sweden on Saturday, having fought out a creditable goalless draw against them less than a month ago, and will go into it with renewed confidence. Rightly so.

Gustavsson named arguably his best possible line-up – statistically the most experienced team in Matildas history, by age and games played – and his players rose to the occasion, bursting out of the gates against their trans-Tasman rivals at the Ajinomoto Stadium in Tokyo.

They dominated possession and territory in the early exchanges and it eventually proved too much for the Football Ferns, who struggled to contain their enterprising combination play. As the Kiwis tried to play out from defence in the 17th minute, Kerr’s incessant pressure forced a turnover, and Australia turned it into a delightful team goal.

Kerr had the final pass, flicking on for a rampaging Tameka Yallop to thump the ball into the roof of the net for an emphatic opening goal.

It was 2-0 not long afterwards, as Kerr rose highest to meet a corner kick delivered by Steph Catley and nod it past New Zealand goalkeeper Erin Nayler.

A third would not come so easily as a desperate New Zealand threw caution to the wind in the second half, their own Olympic dreams disintegrating in real time. Goalkeeper Lydia Williams almost opened the door for them, as a curious excursion to the edge of her penalty box to collect the ball almost ended in disaster, but for the most part the Matildas held their nerve well – until the dying moments, as an ambitious cross and a hopeful header from Gabrielle Rennie combined to give the Ferns a sniff in added time.

It was too little, too late, but all things considered, it was a job reasonably well done by the Matildas. Tougher tests against better teams lie in wait, but they had to start somewhere.