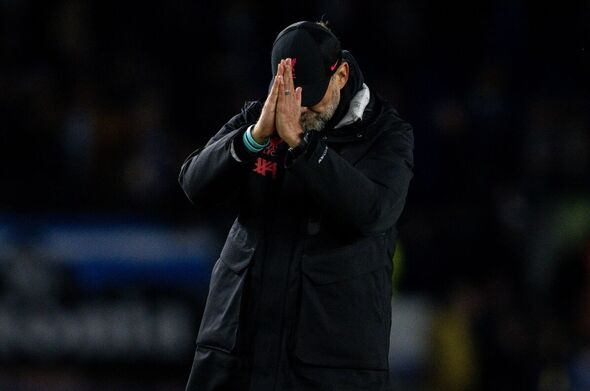 Jurgen Klopp admits Liverpool could make some major personnel changes in the summer unless results pick up on the pitch – but insisted he is going nowhere. The Reds boss has expressed alarm at the current drop off in form describing last weekend’s defeat at Brighton as the worst display of his career.

And while he admitted there were echoes from his final season with Borussia Dortmund, he maintained that unlike there walking away is not the solution.

“At Dortmund it was clear when I left I said ‘something has to change here’. It was a different situation but if you want it’s similar. Either I go, the manager position changes or a lot of other things change.

“As far as I know, from what I hear, if nobody tells me, I will not go.

“So that means maybe there’s a point where we have to change other stuff. We will see that. But again it’s something for the future, like the future in the summer, but not now.

Klopp dismissed suggestions he might be “too loyal” to players who have served him well but insisted there had to be realistic replacements for those who he feels have had their time.

“I am loyal but I am not too loyal. If you can then and go out and bring in another player to replace that makes sense. For both sides, good idea, it was a great time, see you later. If you cannot bring anybody in though you cannot move anybody out.”

Liverpool have a chance to bounce back from the Brighton humiliation on Tuesday when they travel to Molineux for their third round FA Cup replay against Wolves.

And Klopp vowed to put out his strongest side possible in order to ignite a season in the FA Cup. With his side 10 points from fourth place in the league, 19 points behind leaders Arsenal, and with Real Madrid to come in the last 16 of the Champions League next month, this could be their best shot at silverware.

Meanwhile, on the prospect of Liverpool making new signings in the near future, Klopp added: “Yes, we have to strengthen. Is this the right moment to do it? I can’t see it. If solutions for us were outside and doable of course we would bring in players to help but we have an existing squad as well and we’re under-performing.

“We are not stubborn – we look outside as well – it’s not that we think we will just be with these boys until 2050. It’s always about what we can do.”