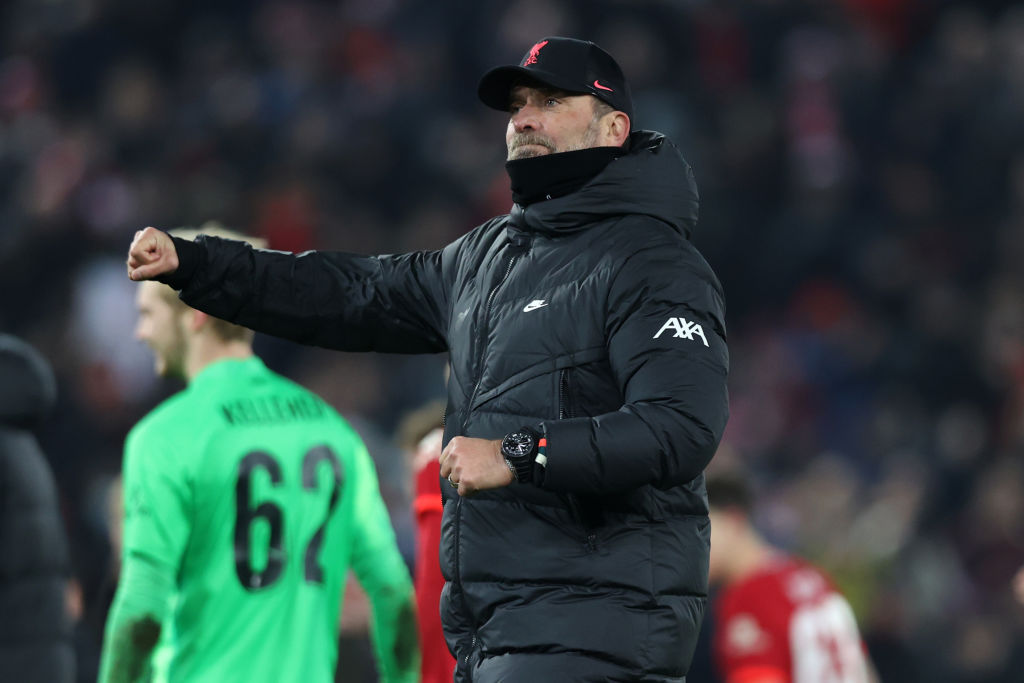 Jurgen Klopp has hailed the performance and the progress of ‘outstanding goalkeeper’ Caoimhin Kelleher after Liverpool beat Leicester City on penalties in the Carabao Cup quarter-final on Wednesday night.

The 23-year-old saved spot-kicks from Luke Thomas and Ryan Bertrand to help the Reds into the semi-finals after the match had finished 3-3.

He may have conceded three in normal time but the Irishman also made some key saves before the penalty shootout and has caught the eye of his manager yet again.

Kelleher may be firmly in second place in the pecking order behind Alisson Becker, but he has regularly impressed on his chances in cup competitions and rare opportunities in the Premier League.

Klopp could scarcely speak highly enough of him, stating that he is no longer a ‘talent’ but can now be considered an outstanding goalkeeper.

‘Yeah, of course it’s important,’ Klopp said of the two penalty saves. ‘But he is an outstanding goalkeeper. I don’t want to say anymore he’s a “talent”.

‘For goalies maybe it’s possible because they are talents a bit longer because they can play longer. But he is an outstanding goalie; with his feet, game understanding, all the goalie skills.

‘John [Achterberg] and Jack [Robinson] over the years did an incredible job with the boy, it’s really outstanding.

‘Of course it’s nice. It’s not the first time he was part of these spectacular games, against Arsenal [in 2019] it was similar. But now he is even a step further. Like I said, he saved our life, was really helpful tonight.’

Liverpool found themselves 2-0 behind after just 13 minutes thanks to a Jamie Vardy double and then 3-1 behind at half-time.

However, second-half strikes from Diogo Jota and a 95th minute Takumi Minamino effort took the game to spot-kicks where Kelleher shone.

The young stopper revealed the team talk that Klopp gave at half-time which helped turn the game around.

‘Yeah, obviously we didn’t get off to a great start and at half-time we’re obviously 3-1 down, [but] we actually felt quite confident because the goals we gave away were kind of mostly our fault really, giving the ball away,’ said Kelleher.

‘The manager just said at half-time, ‘If you get the next goal this crowd will get up and anything can happen.’ So we always believe right to the end and that showed.’

The win sees Liverpool progress to the semi-finals of the Carabao Cup where they will take on Arsenal over two legs in January.