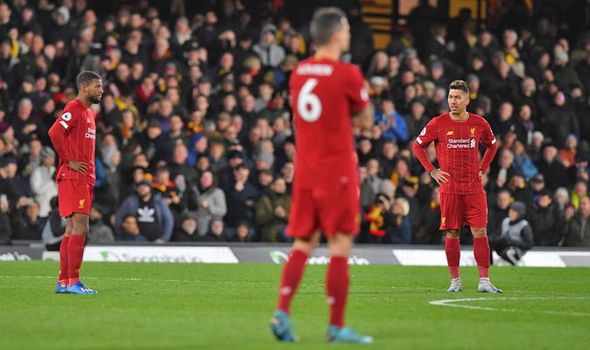 Liverpool’s unbeaten record came to an end against Watford as they were stunned 3-0 by the Hornets. Two goals from Ismaila Sarr and one from Troy Deeney inflicted their first loss of the Premier League season.

Liverpool suffered an evening to forget at Vicarage Road as they were crushed by Watford and their players were solely to blame, with Dejan Lovren the worst of the bunch.

With Watford fighting for their lives at the bottom of the table, they turned in an incredible performance to ensure Arsenal will remain the only Invincibles in Premier League history – for now.

Sarr bagged a well-taken brace, finding the back of the net from close range after excellent work from Abdoulaye Doucoure and then cooly chipped over Alisson, before Deeney’s smart finish.

Express Sport have run the rule over Jurgen Klopp’s players after their shock 3-0 defeat – but do you agree with our ratings?

Did drop the ball and gave Troy Deeney the chance to open the scoring but he recovered well. But things would get a lot worse as Watford found three goals to end their Invincibles run.

Woeful display, summed up as he gifted Watford the third goal.

Too interested in battling Deeney. Arguably at fault for the goal, failing to cut out the ball because he was too tight to the Watford skipper.

Blocked Abdoulaye Doucoure’s shot brilliantly in the first half and came to the rescue after an error from Alisson.

Missed a glorious chance in the second half, with Ben Foster saving smartly with his legs.

Better game in comparison to recent weeks and probably the best player for the visitors.

Made a great interception to get Liverpool out of trouble in the opening ten minutes but nearly gifted the ball straight to Will Hughes.

Tried to make things happen but lacked a final ball.

Poor evening, didn’t get going until Watford were 2-0 to the good.

Didn’t have any service but found himself too far away from goal.

Twisted and turned but lacked punch just like the rest of his team-mates.