Let the history books show that no team did more to damage Celtic’s quest for nine-in-a-row than Gary Holt’s Livingston. Had Rangers posed half the menace of Scott Robinson Scotland might still have a title race.

As the board went up for five minutes of additional time at the Tony Macaroni Arena Gary Holt’s side were heading for an improbable double over the SPFL champions in their fortress.

Beaten at the same venue in October Celtic found a way in the end. They usually do. 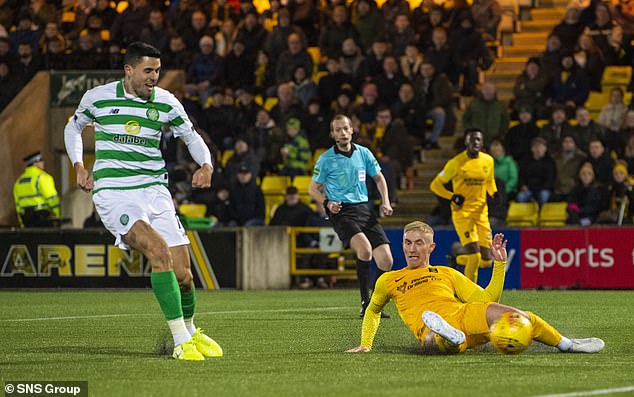 Man of the Match: Lyndon Dykes.

And, as news of a Rangers defeat to Hamilton filtered through, a deflected Tom Rogic strike in the second minute of injury time had the feel of a decisive moment.

Thirteen points ahead with nine games to play Neil Lennon’s failed to secure their 14th consecutive away win. Still the only team European unbeaten in domestic competition in 2020, however, they can almost see the ribbons on the trophy now. It proved a precious point in the end.

The night had a rather different feel a minute into the second half. Patchy and hopeless on their travels Livingston have won just one of their last 14 away games. At home on their artificial surface they’re a different proposition.

So it was, then, that the Lions recovered from Callum McGregor’s 16th minute opening goal to seize the lead 50 seconds into the second half. Captain Jon Guthrie capitalised on a rare lapse to level it before half-time, Scott Robinson silencing the away support with his second goal of the season seconds after the interval. Both have come against Celtic. Both threatened to infliect rare calamitous defeats on the reigning champions. 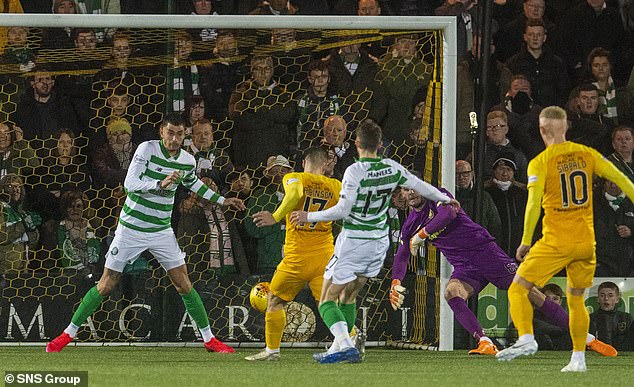 Unbeaten in eight at home since losing to Rangers in November Gary Holt’s side defended their lead heroically until Odsonne Edouard’s low cut back was fired towards goal by substitute Rogic, the ball taking a huge deflection en route to the net.

Extending their lead at the summit news from Ibrox gave this the feeling of a Celtic victory. The net result of a point was pretty much the same.

Celtic always knew this was a huge, critical test. And they looked likely to pass when Callum McGregor claimed his 12th strike of the season after 16 minutes. Greg Taylor made headway on the left flank, a first time low cross sclaffed to the feet of McGregor on the edge of a crowded area by Steve Lawson. With no space to shoot with his left the Scotland midfielder dragged the ball onto his right and thrashed an unstoppable shot past on-loan Rangers keeper Robbie McCrorie from 18 yards. With their first real attempt on Celtic finally had a goal in Livingston.

The lead didn’t last long. In the Stoke heyday of Tony Pulis the Potteries side employed the long throws of Rory Delap to deadly effect. 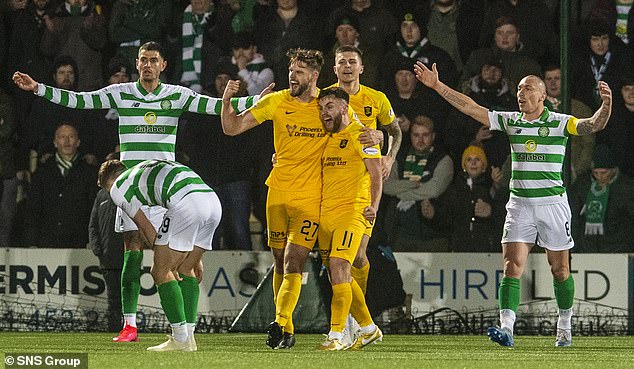 So it was here as Livingston’s on-loan Cardiff defender Ciaron Brown aimed spear after spear at the heart of the Celtic defence with staggering 40 yard long throws. The tactic reaped the ultimate reward when Livingston drew level after 24 minutes.

Since rejoining Celtic on loan Fraser Forster has been a figure with inspirational powers.

Yet Livvy’s leveller was a personal disaster for the Englishman. A howler of the highest order.

Launching one one of his lethal throws towards the penalty spot Brown was aiming for the towering figure of Jon Guthrie. Forster came to take the ball and seemed to have it in his grasp until he dropped it straight at the feet of the Livingston skipper. With his back to goal Guthrie simply hooked the ball over his shoulder into the unguarded net, Forster’ protests of an infringement falling – rightly – on deaf ears. 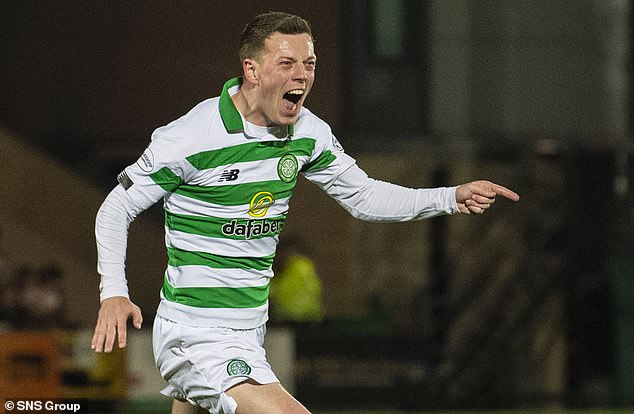 Celtic had no reason to panic yet. In contrast with the defeat in October, a 3-5-2 formation featuring Mohammed Elyounoussi alongside Odsonne Edouard pose an energetic threat.

Now quite himself in recent weeks Edouard had two fine opportunities to put his side back ahead before the interval. The first saw the top score make made space for a shot 25 yards out. He really should have played in Elyounoussi, but hammered a rising shot yards over the bar.

The second couldn’t have come closer to a second goal. Callum McGregor capitalised on a Steve Lawson mistake on the halfway line eight minutes before half-time and burst forward with menace. Celtic had three against two and when the midfielder picked out Edouard unmarked in space the striker looked odds on to open the scoring. Instead he sidefooted the ball against the inside of the upright, the ball running along the line to safety as Livvy breathed a sigh of relief. He really should have scored.

How Celtic came to regret their wastefulness when lightning struck twice 50 seconds into the second half.

Former Hearts player Scott Robinson doesn’t score many goals. His only other counter had come after calamitous Celtic defending in October. So it was once more here. 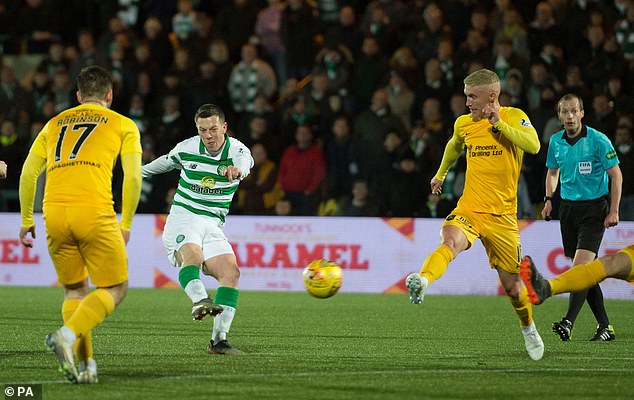 Christopher Julien described his poor defending on Celtic’s last visit here as nervous and emotional. Lyndon Dykes clearly has that effect, the Frenchman having another awful night.

The Australian stripped the £7million man for pace and dumped him on his backside on the right flank, creating the time and space to look up and pick out Robinson bursting into the area. The calm finish high into the net silenced the stunned Celtic support around three sides of the ground. Less than a minute of the half gone and the champions were back in an old familiar movie.

Celtic screamed for a penalty after 57 minutes when Odsonne Edouard was impeded on the edge by Ee Ambrose. Television showed it was outside the area. How referee Willie Collum contrived to give nothing is anyone’s guess.

The arrival of Tom Rogic for Elyounoussi signalled the need for Celtic to find a bit of magic.

The game should have gone beyond them totally when Julien – who had another awful night here – hoofed a hopeless clearance straight to Lyndon Dykes deep in his own half. Dykes blew a terrific chance and Celtic so nearly made the home side pay when finally managed to turn the yellow shirted defence and get a run on goal with 18 minutes to play. A combination of heroic defending from the opening goalscorer Guthrie and fine goalkeeping from McCrorie foiled the Parkhead side again.

Against two lines of yellow Celtic found it near impossible to find space. They only needed one crack at goal in the end, the Rogic deflected strike in the 92nd minute of play earning a reprieve in the Lion’s Den.